THE FOUNDATION FOR MY REVERENCE AND BELIEF IN THE REAL PRESENCE OF CHRIST IN THE MOST BLESSED SACRAMENT IS PRE-VATICAN II NOT POST VATICAN II AND HAS NOTHING TO DO WITH CATHECESIS, GOOD OR BAD! 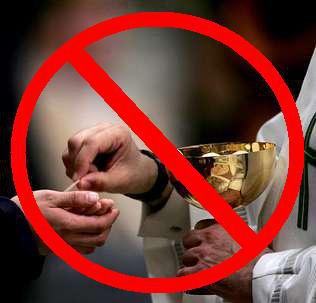 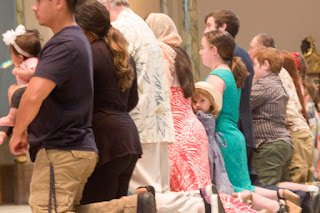 Bishop Barren isn't wrong but he misses the mark in his commentary why so many Catholics, up to 80%, no longer believe in the Real Presence of Christ in the Most Blessed Sacrament. Bishop Barron says, “It represents a massive failure on the part of Catholic educators and catechists, evangelists and teachers.”

It goes deeper then that Bishop Barren! Let me explain.

I have always been an observer of people's behavior since before I entered elementary school. This is especially true of what I observed in my Catholic parish, the Chapel at Fort McPherson, Georgia between 1957 and 1960.

I knew something important was taking place by the demeanor of the people. There was silence in the Church and a great deal of kneeling at Mass. When it came to Communion time, the choir came down from the loft first and processed toward the altar as the priest was receiving Holy Communion. When the priest turned as said "Ecce Agnus Dei" the choir immediately knelt on the hard floor  of the aisle. Then everyone went to receive Holy Communion at the altar railing. I take that back, not everyone, but a small percentage of the congregation went to receive.

The demeanor of the communicants exuded reverence, belief and fear and wonder. When they returned to their pews they knelt down, some laying their head on the forearms which were on the pew in front of them. Other had their hands over their faces as though they were crying or were sad.

Even before I knew anything theological about the Mass or Holy Communion, I knew that there was something important that everyone believed at Mass.

Fast forward to the mid 1970's. What does a child who is not actually catechized observe at Mass?

Not a lot of quiet or sacred silence.

At Communion time, everyone ques up, and that means everyone, to receive Holy Communion from an array of Communion ministers dressed in a variety of tasteful and distasteful ways with secular clothing. No one kneels to receive. Children pop the Host into their mouths and keep moving. There is a lot of grabbing and a multiplicity of ways people actually receive.

In some places, the laity are instructed to remain standing at the pew when they return from receiving Holy Communion until everyone has received!

What does this say to a Catholic child just beginning his awareness of what Holy Communion is or to the atheist who might be visiting that day?

The pre-Vatican II emphasis on reverence sacred silence and the manner in which the Host is treated at Communion time and who can touch it with their hands is the solution to the malaise that is infecting the Catholic Church for the past 50 years.

Are bishops who should be united on this topic willing to go beyond Vatican II political correctness as it regards the wrong headedness of so many reforms. Will there be no Cardinal Ratzingers or Pope Benedict's to tell us the truth and the way back to Catholic sanity as it regards the Mass and how Holy communion is received?
Posted by Fr. Allan J. McDonald at Sunday, September 08, 2019

Off topic, but I think this will give you a chuckle:

In total agreement with what you are saying. Since we are similar in age, I have witnessed the same. I expect Clericalism on Steroids to disagree

I am also in total agreement with you Fr. I thank God every day for my faith and that I have always believed in the "Real Presence" even the time in my life when I did not attend church and the faith was never on my mind. Thank you Blessed Mother for bringing me back. Although Vatican II played a part in what you stated, I feel that the secular culture was starting to take over more and more even before that and Catholics were especially targeted by the enemy, who is now, it appears, in total control. With Our Blessed Mother leading us, prayer and fasting by those still with belief will ultimately bring about conversion of many souls and Her heel will finally crush his head.

Last year Cardinal Sarah stated that Communion in the hand is part of a ‘diabolical attack’ on the Eucharist:

With the neo-modernists fully in charge of the Church now, his warning remains unheeded. Rather, these mocked him for being divisive, as if those who forced the practice on the faithful after the Council were not.

I too agree: I was taught that only the hands of the priest were consecrated (?) to touch the Holy Eucarist. Excuse my spelling and wrong words. I was inspired by my mothers example to receive on the tongue. I am 66, and was away from the church for a long time: imagine my surprise when I returned. May God bless you abundantly.

According to Progressive dogma, the people that attacked Cardinal Sarah are racist

I still say that Holy Communion by intinction is the way to go. It would solve a lot of abuses "Communion in the Hand" seems to engender, and would decrease the regiment of EMHC who are there more "to give the laity something" to do rather than real need.

It's reported that Father John Hardon, S.J. once proclaimed, "Behind Communion in the hand — I wish to repeat and make as plain as I can — is a weakening, a conscious, deliberate weakening of faith in the Real Presence . . ."

It's obvious there is no urgency on the part of the USCCB to discontinue the practice, even after the publication of the PEW survey. But shouldn't this be a huge concern for the bishops, and wouldn't bishops who truly held the Catholic faith change this?

I made my first Holy Communion in 1958 and was taught the following. Approach the altar rail with hands joined and eyes downcast. After receiving, do not cross yourself (this was disparaged as an Irish habit) but return at once to your place. Do not genuflect when arriving at the end of your pew, but kneel down in your place to make your thanksgiving, and only sit when the priest closes the tabernacle door. Try not to chew the Host.

In the Novus Ordo this would not arise since the Ecce is before the priest's Communion. In larger churches, and especially nowadays where everyone troops up (if not for Communion, then at least for a blessing) it is a good and pious practice to make one's thanksgiving at a side altar and perhaps light a candle.

Of course, in the OF the faithful have the option of receiving standing and in the hand, if the bishops permit it. However, if there is a rail, most people will kneel, since standing is awkward, and most will receive on the tongue. And if they do receive in the hand, they will consume the Host before getting up, and the danger of profanation is much reduced.

John, in our diocese till this day, and more than likely because of Irish priests and nuns we had for so many years, we were and still do encourage communicants to "cross" themselves after receiving.

As well I remember quite well many people, not just the choir, approaching the altar railing to kneel as the priest made his Communion, before the Ecce Agnus Dei. It does seem to me to be an abuse rightly reformed if the priest's Communion which concludes the Sacrifice is sidelined by people approaching the railing in order to receive first and some departing Mass after doing so and more than likely the same ones who came just in time for the Gospel.

It is not an abuse but a minimum requirement (Lateran Council IV, 1215) that in order to fulfil their obligation the laity must be present for the Offertory, the Consecration and the priest's Communion.

Obviously, it is better that they be present for more of the liturgy, but it is a Novus Ordo conceit that they have to be there and 'actively participating' throughout. I once attended a lecture at Merton College Oxford by the liturgist Laurence Hemming where he reminded his audience (mostly priests) that the person who arrived late, knelt at the back and left early, was connecting with the liturgy no less than those who appeared more actively involved.

John Nolan at September 9, 2019 at 9:48 AM said,
"... the person who arrived late, knelt at the back and left early, was connecting with the liturgy no less than those who appeared more actively involved."

I once heard a priest remind the congregation that the one who left the Last Supper early was Judas. I don't know if he also arrived late. :-)

I suppose Hemming would think that the person who arrived late for a meal and ate only the dessert was "connecting with the dinner party no less" than those who came on time, enjoyed preprandials with the host and other guests, and stayed for coffee and conversation afterwards.

While arrival by the Offertory and departure after the priest's Communion may constitute the fulfillment of one's obligation, it hardly constitutes a full, active, and conscious participation in the Mass such as is enjoyed by those who arrive on time and remain till the end.

'I suppose Hemming would think that ...'

Only if he shared Anonymous's penchant for inapt analogies. The Mass is not a suburban dinner party whose purpose is to enable people to react with one another.

Having said this, it does occur to me that Anonymous's theology of the Mass may make the analogy less inapt in his eyes.

"The Mass is not a suburban dinner party whose purpose is to enable people to react with one another."

Alas, I suspect some "Liturgy Committees" view the Mass that way!