DOES IT HELP OR HURT THE CATHOLIC CHURCH WHEN HER LEADERS INDULGE IN CULTURE WARS? 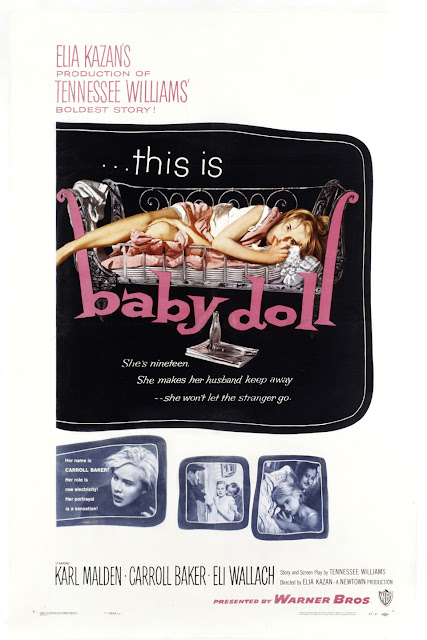 It’s a lazy post Hurricane Dorian afternoon and now back in my rectory in Richmond Hill, I am watching my favorite television network, Turner Classic Movies (TCM).

The movie is a 1956 classic named Baby Doll. It was so controversial in 1956, that the Catholic Church condemned it and tried to thwart its success and did so quite successfully!

Was the Church’s involvement in condemning movies and other cultural aberrations the beginning of the advancement of the nones we know so well today? Do rank and file lay Catholics find it annoying that the Church is constantly condemning everything a modern culture produces?

Was it wrongheaded, in retrospect, for the Church not to find good in movies that depicted sin and evil as well as human sexuality? Note below, in the Wikipedia description of this movie and its controversy and how the Episcopal Bishop of New York treated Baby Doll, compared to the New York Cardinal.

This movie reminds me a great deal of the writing of the Catholic author Flannery O’Connor. Should Church leaders see these kinds of movies as a parable and heed the advice of Episcopal Bishop Pike of New York back in 1956?

This is from Wikipedia :

Baby Doll was released in the United States on December 18, 1956, although the film had begun garnering controversy within the weeks before its release due to a promotional billboard on display in New York City, which depicted the now-iconic image of Baker lying in a crib, sucking her thumb.[6] Baker received a phone call from a journalist on a Sunday morning, saying "Your film Baby Doll has been condemned by the Legion of Decency and Cardinal Spellman has just stepped up to the pulpit and denounced it from St. Patrick's Cathedral. What have you got to say?"[13]

The film received a seal from the Motion Picture Code, but the Catholic Legion of Decency gave it a "C" ("Condemned") rating and called it "grievously offensive to Christian and traditional standards of morality and decency." They succeeded in having the film withdrawn from release in most U.S. theaters because of their objections over its sexual themes.[11] Variety noted that it was the first time in years that the Legion had condemned a major American film which had received the approval of the Code.[11]
Other religious figures became involved in the controversy surrounding the film, including Francis J. Spellman, the Catholic Archbishop of New York, who called it "sinful" and forbade Catholics in the archdiocese to see the film and James A. Pike of the Episcopal Cathedral of St. John the Divine in New York, who countered Spellman by pointing out that there was more "sensuality" in the film The Ten Commandments than there was in Baby Doll, and argued that "the church's duty is not to prevent adults from having the experience of this picture, but to give them a wholesome basis for interpretation and serious answers to questions that were asked with seriousness."[11] Others agreed with Pike, including the Catholic Archbishop of Paris and the head of the Catholic film Institute in the U.K., while the Catholic Bishop of Albany, New York also forbade Catholics to see the film, which the American Civil Liberties Union objected to as a violation of the First Amendment.[11]
According to Baker, she and everyone else who had worked on the film had "no idea" that the material would be perceived as controversial.[14] It was believed that the main reasons behind the backlash regarded the seduction scene between Baker and Wallach, in which his character successfully attempts to seduce and arouse her outside the farmhouse.[14] There was also speculation that, during their scene together on a swinging chair, that Wallach's character was touching Baby Doll underneath her dress due to the fact that his hands are not visible in the close up shot. According to both Baker and Wallach, the scene was intentionally filmed that way because Kazan had put heaters all around them because of the cold weather.[14]
The movie was banned in many countries, such as Sweden, due to what was called "exaggerated sexual content". The film was also condemned by Time magazine, which called it "just possibly the dirtiest American-made motion picture that has ever been legally exhibited".[15] Due in part to the attempts to have it banned or suppressed, the film was not a commercial success, although it performed decently at the box office in spite of the controversy. According to Kazan, however, the film did not make a profit.[10]
In retrospect, star Eli Wallach called the film "one of the most exciting, daring movies ever made", adding "People see it today and say, 'What the hell was all the fuss about?'"[6]
Posted by Fr. Allan J. McDonald at Thursday, September 05, 2019

I am curious. If the movie was condemned by the Church, did you watch it? I had seen it on the same channel several years back. You asked for opinions on the Church condemning movies, and its effect on the nones. I do think the Church is right in condemning movies that are without merit. It should condemn movies that are purely pornographic. I don't think Baby Doll fit that category, and I am not a huge fan of the movie. The script was written by a well recognized playwright. Its director also was well respected by his peers. The actors gave good performance. Its photography was well done. The movie had merit, though some could rightfully argue that the story was not something to recommend. The Church could have rated it as something to avoid, just as they can recommend movies that people can benefit from seeing. Condemned is a harsh word. I think a short review giving the reason for avoiding the movie might have been a better choice.

A correction: James Pike was never the Episcopal bishop of New York (New York City area---there are some other Episcopal dioceses in that state)---he was the dean of St. John the Divine until 1958, when he became bishop of the San Francisco-based Diocese of California. Then he went "bat-crazy", denying the Trinity, and there were calls for a trial on heresy from some bishops, including the late Henry Louttit Sr., who was a Florida bishop in the 1960s (his son, still living in the Savannah area, was bishop of the Savannah-based Diocese of Georgia from 1995-2010---he was even ordained at none other than at St. John the Baptist). Pike ended up resigning in 1966 and died in the Judean desert in 1969.

The Episcopal bishop of New York at that time was Horace WB Donegan, a High-Church bishop who liked wearing the miter, cope and chasuble.

Recently I read a directive from the same period (Pius XII) which sets out, in explicit and intimate detail, what married couples can legitimately do in the marriage bed. In particular it refers to the female orgasm and how it may be brought about. I doubt if those who produced this ludicrous instruction had ever been to bed with a woman.

Long before the Index Librorum Prohibitorum was abolished in 1966 few Catholics knew what was on it, and why. Some explicitly sexual texts (for instance those of Henry Miller) were not included since they did not impinge on Catholic doctrine. Sr Faustina's so-called revelations most certainly were, by John XXIII in 1959.

What was the point of the movie? Was it to depict a bad situation and the eventual justice of the participants? Or was it salacious entertainment to show that whatever was depicted was not so bad, after all. The latter seems to be a recurring theme for Hollywood and the movie industry in general.

When I was about 14 I saw the play Abelard and Heloise which featured a totally nude Diana Rigg only a few feet away having simulated sex with a male actor whose name forever escapes me. I later read that Ms Rigg was not in favor of the scene but had been taught in acting school that you do whatever the director directs. I wondered even then if that had anything to do with the huge number of morally undefined actors unable to discern the damage they do when they portray events without the full impact or results on the characters in the play and if it ever dawned on them that the artistic license and daring portrayals were merely elaborate paths to sexual gratification for the directors and producers?

If the Vatican were writing such an instruction today, they would be very knowledgeable about sex between two men. It could be a veritable instruction manual! Maybe Father Martin, LGBT SJ would write the forward

I have missed the obvious: Tennessee Williams was the author. It is the product of a tormented soul.

TJM- I'm sure Fr. Martin would not mention you by name.

So what? Have to have the last word, Clericalism on Steroids