IT’S ALL SO VERY TIRESOME! 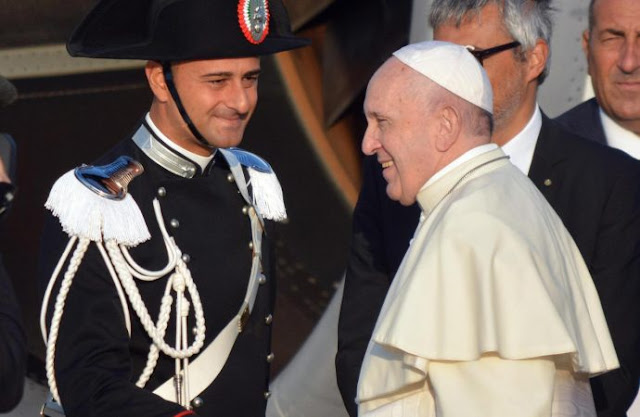 ROME - Pope Francis long has had a tendency to step on his own story. His 2013 “Who am I to judge?” soundbite, for instance, delivered on the papal plane back to Rome, meant that his trip to Brazil for World Youth Day was forgotten even before the confetti could be cleared from Rio’s Copacabana beach.
Yet even by his own standards, Wednesday’s bombshell was a doozy. Aboard another papal plane carrying him to Mozambique, the pope told a French reporter that he considers it “an honor to be attacked by Americans.”
Posted by Fr. Allan J. McDonald at Thursday, September 05, 2019

I thought PF was smart, he's not smart (or merciful)

He truly does not know when to keep his mouth shut...He thinks we're attacking him...He certainly doesn't help himself every time he puts his foot in his mouth.

I think HH needs to friend a cat, it might help him....ugh.

'It is an honour to be attacked by Americans'.

From a European perspective it is an honour to be defended by Americans, and on the eightieth anniversary of the outbreak of WW2 perhaps PF might reflect on the role played by the Americans in defending democracy in that conflict and throughout the Cold War, and contrast that with Argentina, whose main contribution was to provide sanctuary for Nazis.

Argentina's military efforts were spent on oppressing its own people. The only time it risked conflict with a serious opponent (1982) it got its arse well and truly kicked.

And it's not the only Argie arse which merits a good kicking in 2019.

So we see two world leaders, one from the right and one from the left: President Trump and Pope Bergoglio. Both have a strong following of admirers and both have a strong opposition that questions just about everything they say and do. And they both share the same weakness: They are apparently in love with the sound of their voices and seem to believe that the public is just hanging on every word they speak, type or tweet. The result is that both men have provided ample fodder to their enemies. Perhaps it would help them to remember these wise words from Proverbs:

Prudence is one virtue that seems all to scarce in our modern world. Let's pray for both of these men.

Thanks for the kind words for those of us on the other side of the pond. By way of background, my great-grandmother was born in Piccadilly and her father, an Anglican priest, converted to Catholicism before the turn of the last century. Needless to say, his ministerial life came to an end because he was already married and had children. Too bad John Paul II was not around then because the family always said this was a very painful decision for my great-great grandfather to make.

Thanks also for pointing out the supreme irony in PF's ill considered comments. It really does not help his cause. It makes me once again question his intelligence and what really matters to him.

Actually, I think it rather sad that PF tends to define himself by what he hates rather than what he loves. He began his papacy by scolding the Curia like an old-fashioned schoolmarm. The revival in certain religious Orders should be welcomed, yet PF cannot bring himself to encourage this trend since they uphold traditional beliefs and practices and therefore are 'rigid'.

He dislikes bishops who are intellectually able (perhaps because his own academic career was lacklustre) and ambitious. That the governance of the Church will then be in the hands of mediocrities doesn't seem to concern him; indeed it may be what he wants.

He uses language about his fellow Catholics which is far from charitable. 'Self-absorbed promethean neo-Pelagians' is an epithet he has used more than once, although precisely what he means and to whom it is addressed is deliberately left unclear.

Some say he just says whatever occurs to him, oops! Then I say, His Holiness would do well to curb this habit. If it isn't just off the cuff, but rather considered, then I repeat, His Holiness would do well to avoid deliberate insults. Not an insult? A broad, negative statement about entire group is virtually always a bad idea. Feel free to cite an example to the contrary.

That said, I think the pope is fed a steady diet of distorted information. That doesn't let him off the hook, but it helps explain things. When he actually came to the U.S., he was overwhelmed by the reaction -- maybe because he didn't have an accurate picture in the first place?

Finally, it may be that he's simply trying to make a tactical point, figuring people will get that, and realize he's not really intending to insult an entire country. To that I say, such a talkative person can always come out and actually say that.

You may recall that PF was a bouncer as a young man. That might explain his thuggish tendencies. He also came of age in Peronist Argentina, not the best place to form a world view. He is actually a sad, little man. He stands in the shadow of some truly outstanding pontiffs who came before him in the 20th and early 21st centuries.

Such paternal care and affection for the Holy Father's spiritual children in these United States! /s I'm happy to oblige His Holiness with continued honor in the way he suggests.

What, pray tell, explains yours?

TJM - It is not surprising that you fall into the popular trap of mistaking disagreement for "attack."

LOL - John Nolan who is far smarter than you apparently viewed your “disagreement” with Bee as an attack. You are clericalism on steroids, always insisting on the last word. Since the 1960s “reforms” we no longer view guys like you as the big man on campus

TJM - How you or John Nolan may view my comments doesn't concern me. You wrongly perceive disagreement as an "attack." It's a fairly common phenomenon today, one that can be found from the halls of Congress to Parish Halls.

It's unfortunate because it precludes serious discussions. As you are doing now you are attempting to demonize the person who simply disagrees because it gives you satisfaction, not because there is any truth in what you are asserting.

That demonization is what people do when they have no cogent arguments to back up their assertions. For evidence of that, see your next comment...

We know that you do not care what rational, faithful Catholics think. All liberals do is demonize, even though they are generally the demons.