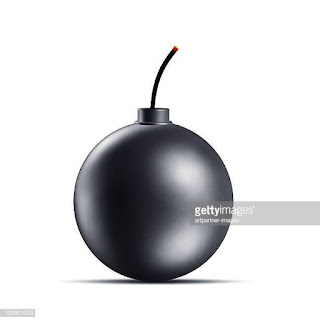 This is from CRUX:

On American critics, Pope says he doesn’t want a schism but he’s not afraid of it

On American critics, Pope says he doesn’t want a schism but he’s not afraid of it

ABOARD THE PAPAL PLANE - In response to a question about his recent declaration that he’s honored when “Americans are attacking me,” Pope Francis said Tuesday that while he prays to avoid a schism in the Catholic Church, he’s not afraid of it either, because such rifts have occurred throughout history.

Francis also acknowledged that the U.S. is hardly the only place from which he occasionally draws fire, noting that he also has some critics within the Roman Curia, meaning the administrative bureaucracy of the Vatican itself.

Further, Francis also said that criticism isn’t always destructive, especially when it’s delivered in the open rather than behind one’s back.

“On the question of schism … In the Church, there have been many,” Francis said, giving the example of ruptures that followed the First and Second Vatican Councils, including one led by the traditionalist Archbishop Marcel Lefebvre, founder of the Society of St. Pius X.

“There always is the schismatic option in the Church,” Francis said. “It’s a choice that the Lord leaves to human freedom. I am not afraid of schism … I pray for them not to happen, as the spiritual health of many people is at stake.”

The pope also said that he prays for dialogue, because the “path of schism is not Christian.”

A schism, Francis said, is an ideology that can sometimes have a point, but which “enters into doctrine and splits it apart.”

Francis’s remarks came as he answered questions from the nearly 70 journalists who traveled with him during his Sept. 4-10 visit to Mozambique, Madagascar and Mauritius.

The question about schism was posed by English-speaking journalists about his comments on the Sept. 4 flight to Maputo, Mozambique, when he told a French journalist that he’s “honored” by the criticism he receives from some quarters within the American Church. The journalist, Nicolas Seneze, handed the pope a copy of his new book How America Wanted to Change the Pope, which hasn’t been released in English.

The pope began his response by saying that “criticism is always helpful,” and that when one receives a criticism, it’s important to ask if it’s true or not. Criticism, he said, can sometimes cause anger, but there’s always something to learn from it.

The pope swiftly observed that Americans aren’t his only critics.

“Criticism comes not only from the Americans, they’re coming from all over, including the Curia,” he said.

Francis also praised those who criticize him to his face, “having the honesty of saying” their objections out loud. “I don’t like it when criticism is done under the table… when they smile and then stick the knife from behind. This is not loyal.”

Criticism, he insisted, can be a constructive tool. When a person issue a criticism that isn’t fair, the pope said, he or she should be ready for a response and to dialogue about it.

On the other hand, Francis said, a critic who cloaks his or her objections behind a façade is “an arsenic pill, a bit like throwing a stone and hiding your hand. This doesn’t help, and it comes from closed [minded] people who don’t want to hear the answer.”

When it comes to criticizing the pope, he said, “saying what you don’t like, writing an article and asking for a response, this is loyal. This is loving the Church. Instead, voicing a criticism without dialogue [and] without wanting an answer, is not loving the Church … [it’s to want to] change the pope, make a schism.”

Answering the same question, Francis said that those who criticize him for following the Second Vatican Council and for speaking about social issues, “saying [the same] things John Paul II said,” and who label him as “a bit communist,” are injecting ideology into doctrine, “and that’s when schism occurs.”

“Today we have pockets of rigidity, which aren’t a schism, but they’re semi-schismatic ways of life that will end badly,” the pope said. He added that bishops, priests and lay people who are “rigid” lack the “health” of the Gospel.

As he’s done before, he warned against proselytism, saying that that’s something for political parties or sports teams but not for religion.
“Someone can say, pope, what does it mean for you to evangelize?” the pontiff said. “There’s a phrase by St. Francis that I like: Preach the Gospel, and, if needed, use words.”

Evangelization, he said, is to be done by example, and only when one is asked where their attitude comes from should one talk about faith. The protagonist of evangelization, Francis said, is not the individual Christian but the Holy Spirit.

“When you see religious proposals on the path of proselytism, that is not Christian,” he said, noting that in Mauritius, there’s an understanding among the followers of different religions that they’re all brothers.

Does he use the word ‘proselytize’ and does he use it the same way? He seems to have an understanding that it is a negative meaning. I do not know it that way.

Actually what the Holy Father says about proselytism and evangelization is what my father embraced in the pre-Vatican II Church. I normally associate proselytism with fundamentalist Protestants who do not respect the religion of others and feel compelled to change them. I had that happen to me many times growing up in the south and I resented it.

Evangelization is based upon living one's Catholic life without wearing one's religion on one's sleeve and engaging in conversation about faith or religion when that is desired by both parties.

My father never sent religious greeting cards at Christmas but rather secular ones as he didn't not want to proselytize anyone.

liberals are notoriously cheap, so PF may have to shutter the Vatican.

While I have no issue with emphasizing the importance of our living our faith and providing example, I am put off by the suggestion that there is something wrong with actually telling people about Jesus, about our faith, and explicitly inviting people to share it.

What does the New Testament tell us? That the Apostles simply showed up in various places and let their example suffice? Not at all. They showed up in synagogues and public squares, and they spoke words about Jesus.

Meanwhile, I am astonished that the Holy Father is doubling down on his antagonism toward a substantial portion of Catholics in the U.S., when he speaks of "schism." It is an insult to suggest that those of the faithful who are deeply concerned by some of his decisions and much of his refusal to answer questions and be transparent are in any way schismatical.

Are you sure you are a Catholic priest? You sound so rational and sensible! It is always a pleasure to read what you have to say!

I recall when His Holiness Pope Francis declared that the Church does not engage in proselytism.

Pope Francis haters via blogs and Twitter declared that he hated God and the Church...modernist, heretic!

What they had failed to realize was that Pope Francis had quoted Pope Benedict XVI.

HOMILY OF HIS HOLINESS BENEDICT XVI

Square in front of the Shrine of Aparecida Sixth Sunday of Easter, 13 May 2007

"The Church does not engage in proselytism. Instead, she grows by “attraction”:"

Someone please explain how the activities of Saint Paul and the other disciples -- recorded in the New Testament -- do not fit this definition of "proselytism."

The Church grows by "attraction?" LOL - sounds like a sexual reference to me. Which reminds me.

Uhmm how are you going to attract anyone unless you distinguish yourself from the kindly, mild-mannered secular atheist humanist, who may also be volunteering at the homeless shelter?

I don't think visible crucifixes are allowed. Some bishimps (bishop and whimp) have argued against Christian displays in public so as not to be offensive.

Soon, IF one finds oneself asked a question about one's faith, it won't be time for telling the questioner about Jesus.... it'll be time to RUN if one wants to still have a place for a hat!

Oh btw MT, I'm sure you can find many examples of Pope Benedict denigrating Catholics who are trying to live the faith to the best of their ability....

'Proselytism' means making converts. We have a problem in that in English (and as far as I know in other modern languages) words which were neutral or even positive little more than a generation ago have acquired a pejorative connotation. Think 'discrimination', but there are many others. Rarely is this the other way around.

I can understand that aggressive proselytism is not necessarily the best way to spread the gospel; but to say that the Church does not 'engage in proselytism' is arrant nonsense. MT is constantly telling us that the Church is making converts in Africa, in other words making proselytes.

My great-uncle (d.1965) was a Holy Ghost Father: in fact his Superior was the great and good Marcel Lefebvre. They are a missionary Order. He used to relate that Africans were susceptible to heresy, in particular the Seventh Day Adventists, whom Catholics referred to as the Seven Devils of Africa.

When he stayed with us I would (as a young boy) accompany him to serve his Mass. When he died a colleague remarked that he was lucky - he would not die in a nuclear war and would never have to say Mass in English.

"In the Church's lexicon, proselytism typically refers to conversion efforts that fail to respect the prospective convert’s freedom and dignity. High pressure tactics; telling lies about the other person’s current religion; comparing the weaknesses of another’s religious community with only the strengths of one’s own; attempting to convert children in opposition to their parents; offering worldly inducements to change one’s religious allegiance—these are what Catholics would call proselytism."

"In contrast, a sincere effort to share one’s faith so that others might freely choose to embrace it is considered a virtue. Terms with positive connotations are used to describe such generosity: evangelization, apologetics, catechesis, personal witness, or even simply “winning converts”.

Can you direct me to the Church's lexicon? And who is responsible for its English version? I notice that you put it in inverted commas, so you are obviously quoting from some document. Has no-one told you that quotations need to be attributed?