PROGRESSIVE CARDINAL MARX AIN'T HAPPY AND WE MIGHT SAY LIKE SO MANY ORTHODOX, SO MANY HETERODOX JUST AREN'T HAPPY--UNHAPPINESS IN TODAY'S CHURCH AN EQUAL OPPORTUNITY EMPLOYER! 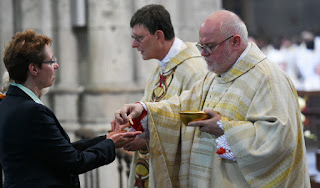 This is a portion of an NCR (National Chismatic Reporter) article which you can read in full
here.

Given the pope's early May encouragement to try to find a unanimous position, Kopp said in a statement, the cardinal "is therefore surprised" by the doctrinal congregation's letter.

Marx, he said, will need to discuss the letter with the other German bishops and, eventually, he hopes also to discuss it with Vatican officials and Francis himself.

The same day the letter was leaked, Francis met at the Vatican with a delegation from the Evangelical Lutheran Church of Germany.

"Let us support one another in the journey, including by continuing the theological dialogue," the pope told them.

"No ecumenical dialogue can advance if we remain stationary," the pope said. "We must walk, progress — not impetuously running ahead to reach a hoped-for finishing line, but walking together with patience under the gaze of God."

Certain themes, including "the church, the Eucharist and ecclesial ministry," require deeper study and dialogue, he said. At the same time, ecumenism is not "elitist," but must "involve as much as possible many brothers and sisters in the faith, growing as a community of disciples who pray, love and proclaim."
Posted by Fr. Allan J. McDonald at Tuesday, June 05, 2018

I wonder if the German bishops ever considered trying to convert the Protestants in their country to the Catholic faith. Then, those people would be able to receive communion. In fact, if they spent as much time trying to convert people as they do trying to find ways people don't have to convert, it is very likely their efforts would actually bear fruit!

"ecumenism" LOL. Teach OUR people the Faith first before chasing this unicorn.

◾"The Catholic Church embraces with hope the commitment to ecumenism as a duty of the Christian conscience enlightened by faith and guided by love, Jesus himself, at the hour of his Passion, prayed 'that they may all be one' (Jn 17:21). This unity, which the Lord has bestowed on his Church and in which he wishes to embrace all people, is not something added on, but stands at the very heart of Christ's mission. Nor is it some secondary attribute of the community of his disciples. Rather, it belongs to the very essence of this community."- Pope John Paul II, Ut Unum Sint, May 25, 1995.

Certain anti-Pope Francis right-wingers have floated the story that the CDF's letter on inter-communion is a joke as Pope Francis plans to approve a document soon that will permit Protestant spouses of Catholics to receive Holy Communion.

"Rather, it belongs to the very essence of this community."

When was the last time you taught your congregation about Transubstantiation, the Blessed Trinity, the Seven Sacraments?

MT, try not to think of us/them as "anti Pope Francis right wingers," but rather as "those people who just want the Catholic Church to remain Catholic." I think this will help.

There are folks who have rejected the notion that that Cardinal-designate Ladaria has "saved the day."

They have insisted that the CDF letter has simply exhorted the German bishops to wait for the publication of universal Church norms that will permit the administration of Holy Communion to Protestants married to Catholics.

"Pope Francis has invited German bishops to await legislation that is applicable to the whole universal Church on the delicate question of allowing Protestants who are married to Catholics to receive Communion in Catholic Churches.

With the exception of Rorate Caeli, none of the right-wing, anti-Pope Francis bloggers (at least from what I've encountered) believes that the CDF letter has truly blocked intercommunion as desired by certain German bishops (as well as additional Churchmen).

The right-wingers have insisted that the letter simply asked the German bishops to wait patiently until Pope Francis declares shortly universal Church norms that will permit Protestant spouses of Catholics to receive Holy Communion.

"Unless God should intervene beforehand, intercommunion with Protestants is officially coming to your diocese, and what’s more, there’s good reason to believe that it may be coming soon."

Dan said..."MT, try not to think of us/them as "anti Pope Francis right wingers," but rather as "those people who just want the Catholic Church to remain Catholic." I think this will help."

They are anti-Pope Francis. They hate his guts. They promote fake news stories designed to defame him.

As with all such dissenters throughout Church history, their narrative has never changed...

...they are correct, the Vicar of Christ is wrong.

God has called upon them to keep the Church Catholic. They are the chosen Remnant whose task is to teach the Truth to the Church of Rome.

They, not Rome, preserve the True Faith.

That is the game that they play.

If they are correct, then that means two things:

1. Pope Francis will have advanced orthodox teaching as, thanks to the promise of Jesus Christ, the Church of Rome has always preserved the Catholic Religion.

2. God commands them to submit humbly to Pope Francis' teaching.

At any rate, I will accept whatever teaching the Church of Rome promotes.

Mark, just a quick grammar quiz: can you tell us what tense is the phrase “has always preserved”?

The only grammar I know is...

Mark, that's a disappointing dodge. I was expecting a long series of quotes from "His Holiness Pope Francis," the oracle of God, discussing the present perfect tense.

MT, if each generation, and each new pope, can remake "traditions" and teachings, this does not seem to make for a very stable Church. You say that "wherever Peter is, there is the Church," can THIS teaching/tradition, also be modified? Or is this untouchable?

What if the "new and improved" teachings are incompatible with previous ones?

I'm just curious. Trying to figure you out.

It's not fair that you're requiring MT to think instead of cutting and pasting numerous non sequiturs!
'

Marc, the serious response is that the Church of Rome safeguards the Faith. Submit to Pope Francis' God-given authority to teach, govern, and sanctify you. As long as you do so, you will hold the True Faith.

Dan, the Church, from Her birth, has evolved in regard to the manner in which She has presented Her teachings to Her children and the world.

At one time, She assigned lengthy penances in regard to the manner in which She administered the Holy Sacrament of Penance.

At one time, She permitted Her children to participate directly in the elections of Pope and bishops.

At one time, local churches regard as inspired Scripture various books that today are excluded from Her Holy Bible.

At one time, She insisted that Her children adhere to the midnight Eucharistic Fast.

At one time, She promoted rigorous fasting practices.

The Low Mass didn't exist until She created the Low Mass.

The manner in which Holy Mother Church has presented the Faith has evolved throughout the centuries.