IS POPE FRANCIS BACKTRACKING ON GIVING CONFERENCES OF BISHOPS MORE AUTHORITY IN A SYNODAL CHURCH??????

An Episcopal nun, Sister Clare Meyer, who received Holy Communion in my Augusta parish with permission of Bishop J. Kevin Boland in the early 2000's, who years later came into the full communion of the Catholic Church but remained an Episcopal nun! This photo was taken on her 100th birthday! 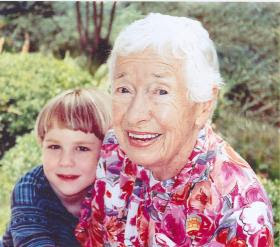 There's a couple of things here that are interesting. First, Pope Francis is referring to Canon Law which he seldom does and when he does, he does so in a negative, snarky way condemning people who are "doctors of the law."

Second he seems to be distancing himself from allowing conferences of bishops to have more power to the detriment of the bishop.

Thirdly, he emphasizes that canon law allows Catholic Holy Communion for non Catholics. Canon Law specifies that the non-Catholic believes in the Real Presence of Christ as Catholic do, they do not have access to their own Protestant minister or church and thirdly and most importantly, it is the bishop who gives the permission on a case by case basis, not the priest.

Here is an excerpt of what the pope said in yet again another off-the-cuff interview as reported by the National Catholic Register:

The Pope said that although the German bishops attempted to establish guidelines through their episcopal conference, “the Code [of Canon Law] does not foresee that. It foresees the bishop of the diocese, but not the conference, because a thing approved by an episcopal conference immediately becomes universal.”

“The particular Church, the code permits it; the local Church [episcopal conference] cannot because it would be universal,” Francis elaborated.

“The conference can study and give direction and opinions to help the bishops to manage the particular cases,” the Pope added.

Canon 844 of the Code of Canon Law generally allows for episcopal conferences to establish norms regarding the circumstances in which non-Catholic Christians may be admitted to the Eucharist.

In the danger of death, or “if in the judgment of the diocesan bishop or conference of bishops, some other grave necessity urges it,” Catholic ministers may licitly administer penance, Eucharist and anointing of the sick to Protestants “who cannot approach a minister of their own community and who seek such on their own accord, provided that they manifest Catholic faith in respect to these sacraments and are properly disposed,” the canon says.

The same canon notes that “the diocesan bishop or conference of bishops is not to issue general norms except after consultation at least with the local competent authority of the interested non-Catholic church or community.”

My final comments: In the 1990's I requested then Bishop Kevin Boland permission to offer an Episcopalian nun Holy Communion who attended the Church of the Most Holy Trinity's Saturday Vigil Mass.

She was a very high Episcopalian and had become disenfranchised by the Episcopal Church and its changes, especially the ordination of women. In fact some of the nuns in her convent were priestesses. She refused to receive Holy Communion in her convent.

Bishop Boland granted her my request (and hers too) and she began to receive each Saturday. I catechized the congregation of "her" Mass about this permission.

Some years later, she entered the full communion of the Catholic Church but remained in the Episcopal Convent in Augusta. I did her Requiem Mass when she died and 14 of her "sisters" were present for the Catholic Funeral Rites.
Posted by Fr. Allan J. McDonald at Friday, June 22, 2018

Not for the first time, I haven't a clue as to what PF means. An episcopal conference is a consultative body, not a layer of authority in between the pope and the diocesan bishop.

Gerhard Müller made this clear five years ago, which did not endear him to many in the German episcopate.

The St Gallen Pope is also a Peronist as many leaders seem to be in Argentina. Contradiction is part of the game to confuse everyone in order to advance one's hidden agenda, in this case neo-Modernism. Coincidentally, 1Peter5 has stories on both:

Francis as a Peronist dictator using contradiction as a method:

My obsession with Modernism in the Church, right to the top, is fact as this translation of deMattei's excellent paper delivered earlier today points out:

Anon @ 5:07 Sorry, Kavanaugh, but Episcopalian is listed as an adjective in Webster's. Now, back to your petty BS.

Speaking of Episcopal...or Episcoplian..or Anglican...or whatever you want to call it, the American version of the Church of England has their annual convention in Austin, Texas starting next week (they hold one every three years). By and large over the last 50 years, little good (from a conservative perspective) has come out of those conventions----don't be surprised if they go even more far-left on the issue of marriage.....

'Episcopal' - pertaining to a bishop. 'Episcopalian' - adhering to a Protestant sect that has episcopal government. Like 'Anglican' and 'Catholic' it can function either as an adjective or a noun.

If you're going to be pedantic, you need to know what you're being pedantic about; otherwise you simply make a fool of yourself.