Commonweal is a progressive Catholic periodical. Thus it is heartening to read this article from it. The author gets it.

The other thing that ad orientem gets extremely right to the question, "who is the priest celebrating the Mass in the photo below?," is the answer "it doesn't matter!" 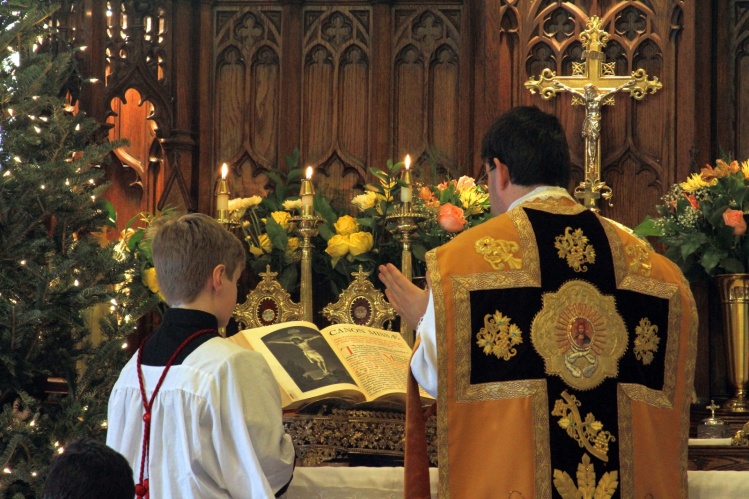 Finding Peace in the Latin Mass
By Michael Wright


(Creative Commons)
I read Shūsaku Endō’s Silence a few months ago, and at the end of chapter four, made a long annotation that opened, “In this letter, we are beginning to see that grace lies in the silence.”
There was never silence or stillness at Mass for me growing up. I was, and am, afflicted with attention deficit disorder. For a long time, my family worshiped in the gym of the local Catholic school, crammed into folding chairs, kneeling, standing, and watching Father Joe turn purple during a homily on compassion. For me, Mass was a test of endurance. I could never find the peace the nuns told us about in CCD. Although I'd learned what each part of the Mass meant, I couldn't linger on what was happening in front of me. I raced ahead in the missalette, willing the priest to speak as fast as I read. My restlessness never left enough room for grace to find its way in.
When I was eleven, a new church opened and we moved out of the gym. I remember two things. One was that Jesus was nailed to the cross through the wrists, which one of the priests explained was historically accurate because the hands wouldn't support His weight and nails would rip through them. The other was the old lady I sat next to one day, frail as her black lace mantilla. She had an honest-to-God missal, which I'd heard of but had never seen. It was in Latin. I immediately thought her the most Catholic woman on earth.
Later, as an adult, I attended Mass in fits and spurts, always seeking the shortest service. My wife and I managed to stay involved just enough for our sons to be baptized and receive communion, but I was just checking the boxes. So I tried living and experiencing my faith in other ways. I mimicked the church's outreach. I went into journalism because I thought I could help people. I read Flannery O’Connor. And I recalled how much I loved my religion classes in high school, where my teachers stressed morality over theology and questioning over conformity.
Then, three or four years ago, on a whim, I attended Latin Mass at St. Mary’s Cathedral in Austin, Texas. Just a block from the State Capitol, St. Mary’s is modest, with bare wood pews and a sanctuary set back from the congregation. I paged through a blue book that had Latin text on one page and English text on the facing page, with stage directions and illustrations in the margins.
My faith is not certain, and my doubt leads to questions. The Latin Mass welcomes me into the silence that allows me to seek the answers.
Despite Catholic school and all that CCD, I didn’t realize until then the Novus ordo wasn’t just a straight translation. The Latin readings confused me; I couldn't tell, for example, just when the transubstantiation was occurring. But I knew without looking at the translation when we were saying “Lamb of God” and the Lord’s Prayer. I watched these strange ways of doing familiar things. The priest faced away from us. We knelt to take communion on the tongue. All the altar servers were male. I bowed at the priest during the recessional, incense still in my nostrils. Then I did something I'd never done after Mass. I sat in a pew, and I felt it: peace.
Since then, much in my life has tried to upset this peace. My career stalled. Hurricane Harvey destroyed my childhood home while my mother lay in the hospital recovering from a lung transplant, a recovery that would not come. But when I go to Mass at St. Mary's with my daughter, I leave with a sense of peace.
Worried that the mere existence of the Latin Mass will lead to a bi-ritualism that will split the Church, Massimo Faggioli recently wrote in Commonweal that “these disputes have wounded the sense of communion between Catholics.” He may have a point. No one at St. Mary's has been less than welcoming to me and to my family, but they do worry that I am going to hell for reading Commonweal. Called to a liturgy that hasn’t changed in centuries, they seem very close-knit, almost to the point of insularity. In the past, they’ve pushed the idea of establishing a parish of their own, separate from St. Mary's, where Mass would only be said in Latin. For many at St. Mary’s, the Latin Mass seems to be a part of a larger withdrawal from modern society, including Vatican II. Many homeschool their children, even for religious education. Some drive from as much as an hour away, making the weekly trek because they cannot find what they’re looking for in their home parishes. They seem to be a community within a community, creating walls, whether they mean to or not. (My comment: isn't it clericalism to insist that circling the wagons in our culture gone crazy against religion in general and Catholicism in particular, is escapism when in reality is it a lay form of monasticism?)
But the Latin Mass has a place for me. I don’t think it’s the future of the church, even though I’ve noticed the pews are filled with fellow Gen X-ers and their children. (My nine-year-old daughter has been to more Latin Masses than English.) The English Mass is too easy; the unfamiliarity of the Latin Mass requires me to quiet my mind, to focus, to attend to my faith in a way that Mass in English does not. It isn't a refuge from a changing world, but a base from which to engage it. My faith is not certain, and my doubt leads to questions. The Latin Mass welcomes me into the silence that allows me to seek the answers.

My final comment: The style of actual participation in the EF Mass, even if one resorts to praying the Holy Rosary during it, is entering into a mystical union, or better yet, a mystical communion with the Most Holy Trinity, our Blessed Mother and the Communion of Saints and Angels. But this is not an academic pursuit, a neo-gnosticism that afflicts participation in the Ordinary Form of the Mass, this is an experience of PEACE, LOVE and an affair of the HEART. It is being swept up into the MYSTERY of GOD, that mere knowledge (gnosticism) will never comprehend and thus diminishes actual participation.
Posted by Fr. Allan J. McDonald at Sunday, June 17, 2018

The author’s account of the immediate and palpable effect the TLM had on him, even before he understood either a word of it, or enough to know when the consecration occurred, illustrates the fact that the message of the traditional Mass is conveyed not by words but by actions, in gesture and ceremonial. After all, almost all the words of the priest in a sung Mass are inaudible, so they make little difference to those in attendance. They can see and smell and feel the action, and that’s what makes the difference.

I recalled that most Catholics were happy with the initial reforms in the mid-60s, when they largely involved only some vernacular in the faithful translations of familiar old hand missals. The ceremony and ritual of the Mass were not yet affected, so despite the vernacular that sounded fresh and inviting, it still had the look and feel of the familiar old Catholic Mass.

So while they could still assume that the “new Mass” would be simply an English translation of the familiar Latin Mass, there were few complaints in the pews.

It was only when the ceremony and ritual gestures were stripped out that many devoted Catholics began to drop out, because the result seemed no longer recognizable as the Catholic Mass they’d known. Indeed, the new Church being “sung into being” no longer seemed recognizable as the Catholic Church of old, so how could it still be a mortal sin to miss Sunday Mass. Indeed, if neither the Church nor the Mass no longer existed recognizably, was there still any such thing as mortal sin? Of course, the answer now, a half century later, for most Catholics, is … No, there’s not.

My pastor reads Commonweal. Right now he is at the AUSCP convention (he has called that organization a priests' "union" of sorts--I laughed when he said that). I hope he read this article.

FrAJM, you are saying all the right things. Have you tried to find a ‘small but stable group’ in your parish?