HOW IN THE NAME OF GOD AND ALL THAT IS HOLY DOES A MAN LIKE THIS GET NAMED THE ARCHBISHOP OF WASHINGTON, DC AND THEN MADE A CARDINAL? 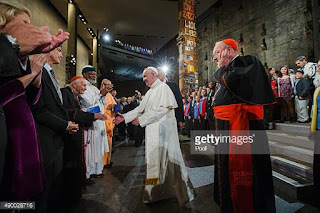 Obviously, in some cases, the vetting process shows nothing but the exemplary nature of the man promoted. But sometimes there are files, secret files, in chanceries that tell another story.

Who dropped the ball here? Or did they simply did not care?

From the Vatican Insider:

The Archbishop of Newark, Cardinal Joseph William Tobin... informs that his diocese “has never received an accusation that Cardinal McCarrick abused a minor” but adds that “In the past, there have been allegations that he engaged in sexual behavior with adults. This Archdiocese (Newark) and the Diocese of Metuchen received three allegations of sexual misconduct with adults decades ago; two of these allegations resulted in settlements”.

From Tobin’s words, it emerges... the existence of various accusations against McCarrick for problems of a sexual nature, concluded with financial agreements, but without these regarding the abuse of minors. And documents and testimonies about the fact that the Cardinal Emeritus of Washington harassed the seminarians began to circulate: in one of them there was talk of a trip by the then Archbishop of Newark with two young priests and a seminarian with whom he shared the bedroom.

My final comments: I think most Catholics and even the liberal press are at the point of Catholic Church scandal fatigue. But how did Cardinal McCarrick get named a cardinal by Pope St. John Paul II when in fact both Newark and Meteuchen had scandalous facts about him? Did anyone share this with the Apostolic Nuncio at the time?????????? And if not, why not and if so, why was he promoted? These are important questions for the Vatican to answer.
Posted by Fr. Allan J. McDonald at Thursday, June 21, 2018

Every interested Catholic in Washington area (USA?) knew about the Cd. MC problem at the time he was named AB of Washington. I knew and I do not have secret connections. The Nuncio must have known. It was reported and talked about in Catholic media.

You ask a good question. There seems to have been a deliberate attempt at ignoring scandalous behaviour for these "top" positions in the Church. Even today perhaps, as in the case of soon to be cardinal, the Bolivian bishop Toribio Ticona, credible evidence is being ignored. Of course, concubinage has been a "problem" with a large minority of priests in South America for a long time, as well as elsewhere where the Church is well established, not to mention the problem of same-sex relationships. There is more to this Pan-Amazonian synod than meets the eye.

MC's proclivities were well known and even documented in a book called "Goodbye to Good Men." MC is the same guy who would not refuse Holy Communion to Abortion Drooling politicians who claim to be Catholic.

We would all hope that when the cardinals gather in any conclave to elect a new pope, that they have enough information on the background of anyone they are considering to be the next pope. One can only imagine if someone like McCarrick had been elected pope only to have his past revealed as has happened with MC.

"Goodbye Good Men" does not offer anything "documented" about McCormick or anyone else for that matter. Documentation requires names, dates, and, amazingly enough documents.

It is a collection of hearsay and anonymous comments. Nothing more. People who praise "Goodbye Good Men" do so because they WANT to believe the author, not because he has presented documentation of his scurrilous claims.

"Unfortunately, Michael Rose uses anonymous sources rather extensively throughout his book, and appears not to have checked some of his facts well enough. The combination of these two weaknesses is, at the very least, dangerous. Perhaps, it could be said, Rose did not foresee the eruption of scandal and therefore could not have anticipated the scrutiny his book would receive in its wake, but this of itself does not excuse his less-than-stellar journalism."

Let me render a guess. Promoted BECAUSE his proclivities were similar to others AND he could blackmail them.

Citing "Goodbye Good Men" as a "documented" source for information is like saying, "Breitbart is an honest news outlet,..."

Boy I sure messed up my last post! Not sure what happened—trying again...

My longstanding view: They simply did not care. It’s a “good ole boy” network. I too have known McCarricks evil ways having read “Goodbye Good Men” 16 years ago.

I am spitting mad about this. I have to think more about what else to say.

Much of the info in “Goodbye Good Men” has been documented in the years since it was written. But it would take volumes of posts to run through it all.

LOL, well your fellow lefty, AW Richard Sipe, documents the same MC antics as Goodbye to Good Men. As are as I am concerned a priest that supports the Abortion Party has ZERO credibility.

I think they agreed with it and still do, generally. The homosexuals that spiked stories about in the past believe that it is OK between adults since they believe most adults desire any sex they can get and resisting that urge is the real sin. The seminarians could just leave if they didn’t like it and many did.

I figured out what I think about this, at least a first draft: http://frmartinfox.blogspot.com/2018/06/about-cardinal-mccarrick-situation-i-am.html

Benedict XVI left the list for Pope Francis. He probably shredded the whole thing. So, we have Chile, McCarrick; and the others too numerous to count. The fish starts sticking from the head. The head is not serious about this issue his actions prove it. The tale of Ali Baba and the 40 thieves comes to mind.

"The Homosexuality of Cardinal McCarrick"

"Your Holiness, I Have the Evidence Card. McCarrick Is a Homosexual, Please Act"

We must pray for Cardinal McCarrick. (It should be noted that he has maintained his innocence in regard to the charges against him.)

As we accept the result of the investigation of Cardinal McCarrick, we must pray, as Cardinal DiNardo said, for those harmed by one of the Church's ministers.

We must pray for Holy Mother Church.

For that matter, wayward religious and laymen are old news.

Nevertheless, this is a sad situation for Holy Mother Church.

What is very unfortunate, but not surprising, is that certain right-wing Catholic bloggers/Twitter types have employed the dreadful news about Cardinal McCarrick to attack His Holiness Pope Francis.

One disgraceful example: "It's no secret that Pope Francis himself is quite sympathetic to sodomites. So why, oh why, did McCarrick get sacked? Did he somehow run afoul of that Bergoglio-led mafia in the Vatican?"

For certain right-wingers, this sad day isn't about praying for Cardinal McCarrick, his alleged victims, and Holy Mother Church. Rather, this is an opportunity to attack His Holiness Pope Francis.

That article made me sick to my stomach

"But how did Cardinal McCarrick get named a cardinal by Pope St. John Paul II when in fact both Newark and Meteuchen had scandalous facts about him"........because, I believe, there was a highly placed American priest in the Vatican who protected these types. He helped to keep Rembert Weakland and Richard Sklba in place during their years in office. They continue their work today through their minions. This priest, elevated, continues to reside in Rome, but has fallen from favor after the Vatican leaks scandal.

MT, your buddy McCarrick was a leftwinger!! Gave Holy Communion to Abortion Drooler, leftwinger Nancy Pelosi! You sure pick em!

PF should unmask this American priest if he is committed to "transparency." That priest is probably a "fellow gay traveler" which supports St. John XXIII's position that gay men should not be admitted to the seminary. It is actually manifestly unfair to admit a gay man to the seminary since he is faced daily with an occasion of sin. I know gay men who are Catholic who struggle daily with SSA. They are courageously battling this afflication and I pray for them daily.

An intriguing aspect of this matter has yet to be revealed:

Why or how has Card. McCarrick fallen out of favor with the Vatican?

Accused or offending cardinals and bishops, whatever their alleged offenses and however blatant, get a pass in the current papacy if they're in favor with the right folks. Ordinarily, the hammer only falls on conservatives someone in Rome wants to get rid of.

But Card. McCarrick is not know as conservative. So what gives?

I suspect this investigation into the molestation of an altar boy in the sacristy of St. Patrick's started some months ago. What is interesting too, is that both Methucen
and Newark have filled in the blanks about his homosexual predation of young priests and seminarians which is on file in both dioceses. That is the bigger scandal because it was known and yet he was still promoted not only to Washington, but as a cardinal.

I think lessens learned from Chile was to act quickly. Cardinal-elect Ladaria may be a balancing personality in the Vatican now and has the respect of the pope because he doesn't act independently of the pope.

PF is just following the play book of a good Peronist

More evidence that McCarrick was engaged in evil in his support of the Democratic (Abortion) Party:

"I remember that it was Card. McCarrick who suppressed information in a memorandum to US bishops from the Prefect of the Cong. for the Doctrine of the Faith, Joseph Card. Ratzinger, about guidelines for voting in these USA.

I remember that it was Card. McCarrick who, after Card. Arinze – while presenting Redemptionis Sacramentum to the press corps – responded to my question about Communion for pro-abortion Catholic politicians, made a bee line to the cameras and microphones after the presser and said, “What Card. Arinze meant to say, was…” and then turned Arinze’s point on its ear."

It amazes me how quick you are to stand tall for your hero. People, either right or left, will react as you would expect when such situations have arisen. There should be no surprise here. And, we've prayed, prayed, prayed, offered reparations etc. My feeling is that those who live such disgusting lives (contrary to what the ministry calls for) must not feel much remorse if this continues.....continues to rear it's despicable head. They must not seriously care about the souls in their charge or, the next generation that will grow up hopefully to be inspired to a vocation. Personally, I feel those within the presbyterate that behave this way have contempt for the church and her faithful while we continue to feel foolish for supporting such an organization that seems incapable of policing itself. But, my faith is more solid than weak, I worship Christ not a flawed manager of a pope and, that sort of directed prayer will hopefully get me and others through yet another disappointing occurrence.

MT is an unhinged left-winger, lacking the mental capacity to understand that the left supports abortion and gay marriage, whereas no one on the right does. He's pathetic and not worth your time, not a nanosecond.

Well. who knows? The lay folks are always left in the dark about the process, who the candidates are and what criteria made John ABC the best candidate for the diocese of XYZ? At least in the Episcopal Church, with all its problems, candidates are announced in advance and there are in-depth interviews---publicized---so you have a good idea of what you are getting. Even aside from the "sex controversy", I wonder why McCarrick at age 71 would have been appointed to a major diocese? That seems a bit old to be starting a new position.

Yes, Anonymous 5:13 I though the same thing when he was moved to Washington at the age of 71. Then again, maybe it took that long to get the money together :-)