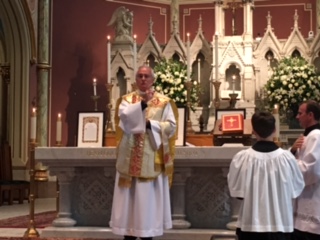 But let me point out the obvious. Vatican II called for the more lavish use of Scripture. Once we got the new lectionary, what happened to the required use of the Propers? These were jettisoned in most parishes in favor of hymns of some kind, biblical or otherwise but usually not the Scriptures prescribed.

The Propers are Scripture and were lavishly and slavishly used in the EF and still are. Would you substitute a Scripture reading in the Liturgy of the Word for a hymn of some kind or a poem. Yes, some would but they are illicit in doing so.

The Lord has called me by name from my mother's womb, and He has made my mouth as a sharp sword. Under the shadow of His hand He has protected me, and has made me a chosen arrow.
Ps. 91:2. It is good to praise the Lord, and sing to Your name, O Most High!
V. Glory be . . .

O God, the birth of blessed John made this day one of honor to us. Grant the grace of spiritual happiness to Your people everywhere, and lead Your people in the path of eternal salvation. Through our Lord . . .


LESSON Isa. 49:1-3, 5, 6, 7
Give ear, ye islands, and hearken, ye people from afar. The Lord hath called me from the womb, from the bowels of my mother he hath been mindful of my name. And he hath made my mouth like a sharp sword: in the shadow of his hand he hath protected me, and hath made me as a chosen arrow: in his quiver he hath hidden me. And he said to me: Thou art my servant Israel, for in thee will I glory. And now the Lord, who formed me from the womb to be his servant, says, "Behold, I have given thee to be the light of the Gentiles, that thou mayst be my salvation even to the farthest part of the earth. Kings shall see, and princes shall rise up, and adore for the Lord's sake, because he is faithful, and for the Holy One of Israel, who hath chosen thee."

Before I formed you in the body of your mother, I knew you; and before you came forth from the womb, I sanctified you.
V. The Lord stretched forth His hand and touched my mouth, and said to me:

Alleluia, alleluia! V. Luke 1:76
"Thou, child, shalt be called the prophet of the Most High, for thou shall go before the Lord to prepare His ways." Alleluia!

At that time, Elizabeth's full time of being delivered was come: and she brought forth a son. And her neighbors and kinsfolks heard that the Lord had shewed his great mercy towards her: and they congratulated with her. And it came to pass that on the eighth day they came to circumcise the child: and they called him by his father's name Zachary. And his mother answering, said: "Not so. But he shall be called John." And they said to her: "There is none of thy kindred that is called by this name." And they made signs to his father, how he would have him called. And demanding a writing table, he wrote, saying: "John is his name." And they all wondered. And immediately his mouth was opened and his tongue loosed: and he spoke, blessing God. And fear came upon all their neighbours: and all these things were noised abroad over all the hill country of Judea. And all they that had heard them laid them up in their heart, saying: "What an one, think ye, shall this child be?" For the hand of the Lord was with him. And Zachary his father was filled with the Holy Ghost. And he prophesied, saying: "Blessed be the Lord God of Israel: because he hath visited and wrought the redemption of his people."

The just man shall flourish like the palm tree; he shall grow like a cedar of Lebanon.

We place our gifts upon Your altar, O Lord, in solemn celebration of the birthday of John. John was the herald of the coming of the Saviour of the world, and pointed Him out when He arrived as Jesus Christ, Your Son our Lord; who lives and rules with You.

Thou, child, shalt be called the prophet of the Most High, for thou shalt go before the Lord to prepare His ways.

O God, let Your Church rejoice over the birth of blessed John the Baptist, for through him she came to know the author of her own birth, Jesus Christ, Your Son our Lord; who lives and rules with You . . .
Posted by Fr. Allan J. McDonald at Tuesday, June 19, 2018

Father you make an excellent point about the Propers. In our parish right before the Novus Ordo was introduced we used all of the Propers (either said or sung in English) sometimes with hymns. Ironic, isn't it?