DOES IT MATTER ANY MORE WHAT KIND OF IMMORALITY A CATHOLIC EMBRACES OR PROCLAIMS? 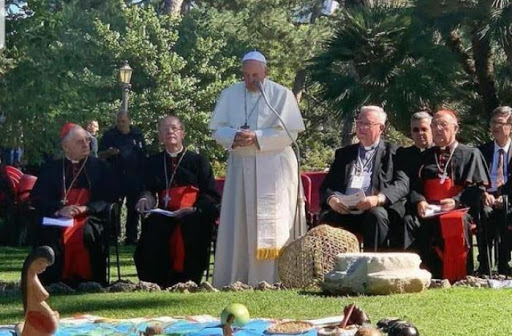 Rome, we have a problem and Rome and all those geographical places united to Rome, do they care about this problem?

There are two major problems associated with embracing immorality. Let’s start with the two in America, one having to do with a secular Catholic politician and president-elect by standards employed for generations. That is Joe Biden:

1. He embraces abortion as a right and through the last stages of pregnancy.

2. He embraces euthanasia as a right.

3. He was a part of a presidential administration and as Vice President desired to force religious entities like the Catholic Church to provide birth control and abortion services through institutional health insurance policies.

The other is a religious leader, and now lacized priest, the former Cardinal McCarrick:

1. It was known that he was living an immoral lifestyle as it concerns the 6th commandment complicated by a person of authority sleeping with those under his authority further complicated by the unnatural aspect of the breaking of the 6th Commandment, homosexual.

2. Despite this he was promoted and eventually named a cardinal

So what are the implications, Rome?

1. Can a Catholic make Catholicism a do-it-yourself Catholicism picking and choosing which of the Ten Commandments the Catholic will follow? If a Catholic wants to break the First Commandment and worship along with Jesus, Pacchamama or any other cult of the earth is that okay now?

Rome we have a problem and is Rome and the geographical areas of the world united to Rome in a “could care less” mode that allows for a President Biden and Cardinal McCarrick?

I report; you retort.

Consider Pope Francis’ reactions to the president of Argentina. It also appears that he turns his blind eye to cardinals who are now exposed as hypocrites and are neutered of any moral position. This provides cover for the politicians. What is concerning to me is that the politicians will use the situation to further weaken the Church both as a structure but also religious liberty. There will be homosexual marriages in Catholic churches within four years.


To say that you "could care less" means that you care.

This morning at Mass during the homily the priest said he looked around our church and saw all these depictions of saints in statues and stained glass and thought maybe the Church was wrong for promoting them for us to imitate because they were too perfect.

As an example he highlighted St. John Vianney. Father said that St. John Vianney spent 9 hours a day in the confessional but there was no way he was going to sit for 9 hours inside a box.

So I guess the answer to your question is yes it matters. Clearly the clergy, from the pope on down to a parish priests are woefully uneducated and basically pathetic. THIS is what the Holy Roman Church has to offer after 2000 years. Boorish, poorly educated, faithless, arrogant men who have nothing to offer the faithful during these alarming times. A pope involved in pagan worship, a priest quoting Communists and a laity who sees nothing wrong with these actions.

I think it is interesting how Saint Francis and Saint Benedict dealt with the societies of their times. Francis, in a time of corruption and wealth, tossed away both and relied entirely on the gospel message. Benedict, in a time of moral decay, put distance between himself and a morally bankrupt society. Neither tried to assimilate into the cultures of their day, they distanced themselves far from it. Both Pope Francis and Biden (I wont call him president elect), want to blend into society. In becoming just like the majority, they then want to proclaim "that's what Catholics do"

I would have walked out, in noisy fashion

Father, you've missed the point. Biden EMBRACES the pope's own gospel. They can "work together" on global warming and "welcoming" immigrants. The federal government reimburses dioceses for refugee resettlement and Trump put a cap on the number of refugees permitted to enter the U.S., killing the pope's cash cow. Biden embraces a universal brotherhood type of religion, much like what the pope aims for with his Abu Dhabi farce--a religion without restraints on sexual morality and without need of Jesus or sacraments (ever notice the decreasing number of mentions of Jesus in the pope's "encyclicals" (if you could call them that)? Biden is a man after Bergoglio's heart! Bergoglio thinks America is too privileged and doesn't pay its fair share to the world and SO DOES BIDEN! Biden and Harris wish to punish success and overtax wealth, essentially halting economic growth, making a populace dependent on the government. Bergoglio and Biden are literally smacking their lips at their chance to be leaders of the worldwide Health Dictatorship that Vigano warned us about. The Church is just a tool for that objective.

I feel Tom Marcus let the mask slip too much. The claim that a Catholic can't be a Democrat isn't about the unborn at all, is it? It's about forcing Catholics to vote for a conservative agenda in regards to things we can disagree on while letting the murder of the unborn continue so it can be used as a sort of spiritual blackmail in perpetuity.

This is not a matter of liberal or conservative agendas. The political confidently and assertively assumes to define Catholicism in the United Staes as the Chinese government has done there. And the Church leaders are allowing it.

I have always said it is about the unborn......especially with Kamala "Abortion Monger" Harris this time around. Tom Marcus just filled in the rest for us!