#PopeFrancis acknowledges that we all lose our patience sometimes. "Me, too. And I apologize for the bad example I gave yesterday" when he slapped the hand of a woman who grabbed him.
0:05
75.5K views 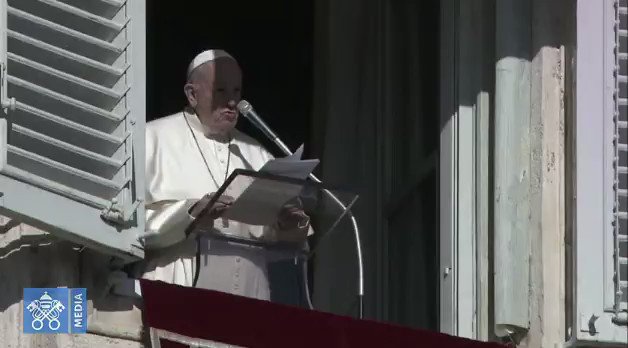 In regard to high-ranking churchmen who had served during my lifetime, other than Pope Francis, the only public displays of anger that I recall involved Pope Saint John Paul II, and Cardinal Ratzinger.

I am entirely in sympathy with the Holy Father on this matter.

That said, he might do well to change his approach, and only shake hands with those in wheelchairs and such. I have been present with the pope (this and prior ones) in crowds, and never felt he owed me a handshake.

Francis assaulted a woman and it was captured on video.

And for those who rationalize his actions, if they were warranted then why did Francis apologize.

He assaulted a woman.

What would happen if a parish priest did this.

What would be the reaction if President Trump did this.

What would be the reaction, from Francis himself, if Cardinal Burke had done this. The condemnations would be swift and relentless. I thought in this he of “Me Too” that any and all assaults against a woman are never acceptable. But let Trump tell that prune face Greta that she should enjoy life and go see a movie, the liberals went nuts. But Francis repeatedly slips a woman and nothing. Hypocritical Left. That miserable, violent old man should resign.

I am glad that Pope Francis apologized for yesterday's incident in question.

Even if he were justified in his reaction, Pope Francis believed that he could have treated the situation in different fashion.

He has, via his apology, set a good example in regard to his willingness to acknowledge his (in his mind) mistake.

A shepherds crook can be used to pull the closer, or prod them away in defense. One who is used to smelling the sheep can be quite adept at using that crook.

You know what...I don't think this is at all out of character for him. I don't think he's as nice, kind, patient or loving as he often scolds others to be. Not that he's wrong about giving such counsel, but as Jesus said, there are those who see the speck in their brother's eye, but can't see the beam in their own... Just sayin'.

I don't find fault with Pope Francis first reaction, I believe in Mexico (when he was pulled into the crowd).

I wish that Pope Francis had not slapped the woman's hand.

But I recognize that he had reacted in spur-of-the-moment fashion. He in danger of a fall. He may have believed that a serious physical attack ...that others would be harmed.

Anyway, via our Holy Father's apology in question, we have moved from a negative situation, as least in Pope Francis' view, to a positive, uplifting situation.

That is, Pope Francis has humbled himself. He has asked forgiveness for an action of his that he regretted.

He has acted in admirable fashion. He is a positive example to those who desire to draw close to God.

Re comparisons with President Trump: Would Trump have apologized?

The woman assaulted Pope Francis. Ten years ago another woman actually pushed Pope Benedict to the ground at the start of Midnight Mass in St Peter's.

Francis might have seen fit to publicly forgive his assailant, but should not have apologized.

'He assaulted a woman'. He did nothing of the sort.

My bubble is burst. This reaction indicates neither holiness nor humbleness. I dont know how I can continue with my papolatry.

Say good bye to the automatic sainthood, lacking in charity and patience.

I agree with John and others that the one at fault is the women. I am not a psychiatrist, but it appears to me that there is a bit of an imbalance in her and she did not seem to show any remorse at what she instigated.

I think the Holy Father was astonished at what was occurring and the grip she had on his hand. It was a reflex reaction to say the least.

Security seem to be somewhat lax about it all. I think the former guard that was recently fired would have dealt with it better.

The Pope not only struck someone, but STRUCK THE WRONG PERSON...

Watch the large red hands of the blonde person next to the Asian woman, the hands with the azure cell phone.

It was THIS person who grabbed and froze Bergoglio's arm and steered his hand to the the poor Asian woman hoping for a miracle, all she was watching was the hand which stopped, moved towards her, and the Pope turning back, and thinking her miracle had happened...and gets slapped by the Pope for her faith.


All this derision of the poor woman is Nick Sandman Pt2...and anyone participating is just as guilty.

Even the still of the video this blog shows the large red hand of the nearby blonde with fingers embedded in the Pope's forearm...a kneeling Asian woman is not going to yank on the elderly, nor able to yank with any force even if inclined to go against their cultural respect for elders.

As for the "apology", his first words were guilt spreading WE...
well, Mr Pope, WE southerners were raised to NEVER strike a woman, so you must be speaking for you and the mouse in your pocket.

I agree with Fathers Fox and McDonald---the woman is at fault. And with security concerns, maybe we need to do away with those "press the flesh" moments. You don't see Trump (or any other recent president) "high-fiving" it down the aisle on the way to a rally. Not like the days generations ago where FDR would drive around in an open car around the Georgia countryside or Truman would take walks outside the White House.

"We" Southerners were also raised to call adult African Americans "boy" and "girl."

So much for being raised right...

Speak for yourself, anon, as I would have been slapped by my own mother for using such terms.

Not me anon. Your statement is "pre-judging" Southerners.