THE PRE-VATICAN II CHURCH'S TRIUMPHALISM IS RESPONSIBLE FOR THE STATE OF THE CHURCH TODAY AS THIS PRE-VATICAN II TRIUMPALISM WAS APPLIED TO WHAT THE SECOND VATICAN COUNCIL WOULD BRING ABOUT! 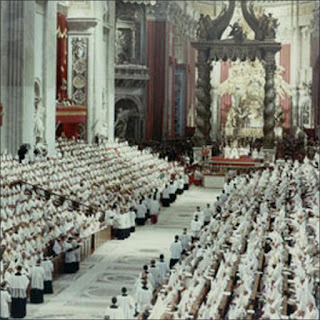 I disagree that Pope Paul VI was the worst pope. There was a giddiness  blowing throughout the Church by 1965 (a pre-Vatican II triumphalism applied to a "pastoral ecumenical council") that convinced the pope and bishops that Vatican II would usher in the Holy Spirit as though at a new Pentecost bringing about a "new springtime" for the Church.

In other words, Vatican II was imposed onto the Church in the most Pre-Vatican II way possible, by the triumphalism of authority and obedience!

People believed that for the most part, especially those in the the clergy and religious.

In fact, by 1967 or 1968 in the USA, very pious, pre-Vatican II faithful Catholics ushered in the Charismatic movement as a result of unbridled ecumenism with fundamentalist, pentecostal Protestants.

If there was ever a 20th century symbol of the meaning behind the Old Testament "Tower of Babel" passage, this is it!

Pope Paul VI began to realize the folly of what was happening with the "spirit of Vatican II" by 1968 but was impotent or unwilling to apply pre-Vatican II disciplinary methods on post-Vatican II idiots. He was weak but not corrupt.

Pope Francis has not moved from applying pre-Vatican II triumphalism onto the Second Vatican Council and the new pastoral paradigm it presents in a triumphalist way. In fact Pope Francis uses the term of the 1960's of the "God of surprises" to justify the post-Vatican II chaos.

Pope Francis is also more interested in charismatic Catholics and their enthusiasm than in pre-Vatican II Catholics. Just this past year he met with a convergence of Pentecostal Catholics and joined them in their free-wheeling style of prayer, but did not meet with Extraordinary Form Catholics who gathered in Rome and for a Mass at St. Peter's Basilica.
Posted by Fr. Allan J. McDonald at Saturday, June 16, 2018

“I disagree that Pope Paul VI was the worst pope.”

Seriously, how far back do you have to go to find a plausible candidate comparable to the two disastrous post-Vatican II papacies that are all too familiar?

And exactly how should a sitting Pope, barque of Peter, respond to Church “giddiness”?

I would suggest that Paul is the worst pope of the last 100 years. Certainly, if you reach back as far as the Renaissance, there are a couple of guys who were certainly worse popes.

Did I say Paul was the worst pope of the last 100 years? I'm not so sure anymore. I remember hearing pundits during the Obama administration say "Congratulations Jimmy Carter, you are no longer our worst president." Well, I guess a similar saying might...wait--I better not go there.