HOW ARE PROGRESSIVES DEALING WITH POPE FRANCIS AND HIS HOLINESS' AMBIGUITIES LEADING THE CHURCH BACKWARDS TO THE GLORY DAYS OF 1970'S CHAOS WITH ALL ITS ABUSES OF DOCTRINE, LITURGY AND PEOPLE, SEXUAL AND OTHERWISE? 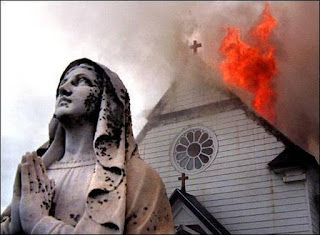 In the first few paragraphs, Fr. Anthony Ruff, OSB, unwittingly makes Pope Francis' case for the post Vatican II's self-referential Church. Ruff makes clear that this self-referential Church is in the very fabric, the very genes of the documents and language of Vatican II. Ruff clarifies this in an eye opening way. Sadly in an idolatrous way, he glorifies it, especially what he says Vatican II didn't say about transubstantiation.

Of course progressives of the Praytell type are apoplectic that their chaotic and confused Pope Francis (one fears if dementia isn't a part of this, or eccentricity as it is sometimes called) is clarifying through his Jesuit Prefect for the Congregation of the Doctrine of the Faith, that women cannot receive Holy Orders and the Germans can't give out Holy Communion to Protestants who marry a Catholic as some kind of reward for doing so.

Progressives are as confused by Pope Francis' eccentricities as are the orthodox.

We can only hope that the Holy Spirit will use the current eccentricities/confusion/chaos/ambiguities to show a new generation what 1970's ideologies did to the Church then and is doing again now! This will pave the way for Pope Benedict's renewal in continuity and the "reform of the reform."

To people like Ruff, the Eucharist is a "Happy Meal."

I recall for decades following the Council that the be-all and end-all of reality was the Vatican II Council. The Council was the object of worship, an idolatry that was realised through the New Mass. And it continues in many parts of the Church. Over the years I have wondered if perhaps there is something demonic about this because it is more than a prudential implementation of what were meant to be pastoral directives of a council, but rather an obsession for implementation on the level of doctrine.

Victor, the Novus Ordos celebrate Vatican II like Catholics celebrate Pentecost and for the same reasons: these events are the beginning of the respective institutions.

By "Novus Ordos," you mean practicing Catholics who are in union with the Church & did not run off to an illicit splinter group?

Novus Ordos: people whose entire frame of reference is Vatican II and what has happened subsequently with little (or, usually, no) regard for anything that came before. See, e.g., Presbyter Mike who posts here.

However the praytellers want to spin this, the fact is that Francis has given Ladaria a vote in the next conclave and the cardinals will likely be much more careful about how they choose the next time around. Also, of the new batch of cardinals, the cardinal elect from l'Aquila is a Burke supporter (he hosted an event honoring Burke a few months ago, and has attended an EF Mass in choir alongside Burke), also the new Cardinal from Madagascar was a signatory to the filial appeal made to Pope Francis before the last synod asking him to hold the line on commuionen for divorced and remarried people.

"Novus Ordos" sounds to me like a plural reference to Novus Ordo liturgies.

Let me suggest "Novus Ordists"--or, more informally, "Novus types"--for those nominally identified as Catholics, but whose style of worship and belief (such as it is) dates back only to Vatican II and its doctrinally and liturgically chaotic aftermath. And who therefore have little or no knowledge of historical Catholicism. Even those--typically seminary graduates of a certain benighted era--who most pompously regurgitate "fake history" they've swallowed hook, line, and sinker.

I usually think “Novus Ordites.” I’m not sure why this morning’s version of myself wrote “Novus Ordos.”