THE GOOD OLD NATIONAL CHISMATIC REPORTER (NCR) REPORTS ON HOW DISMAYED THE WOMEN'S ORDINATION CONFERENCE IS ABOUT WOMEN'S EXCLUSION FROM THE SEXIST INSTITUTION FOUNDED BY JESUS CHRIST, THE SACRAMENT OF HOLY ORDERS (IS THIS BLASPHEMY OF THE HOLY SPIRIT DESCRIBED IN THE 10TH SUNDAY OF THE YEAR'S GOSPEL?)

Below are carefully selected excerpts of the NCR's article, but be forewarned you may want to hold you nose! This colon discharge really stinks! 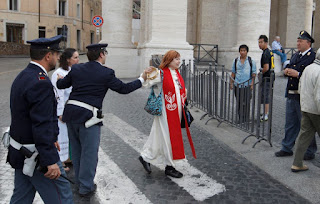 "The Vatican's affirmation of its ban on women priests as 'definitive' teaching rests solely on patriarchal church authority. In doing so, it denies the workings of the Spirit within the people of God."
-- Bridget Mary Meehan

by Dennis Coday
"Archbishop [Luis] Ladaria's arguments are unconvincing and simply nothing new," said a statement from the Women's Ordination Conference, following the release of Ladaria's article. "How long can the Vatican hide behind its sexist arguments that because Jesus was a man, he intended only men to become priests?" the statement read.
The archbishop said he decided to write "in response to doubt" about John Paul's teaching, adding that expressing doubt about the barring of women from the priesthood "creates serious confusion among the faithful."

"The only 'serious confusion' among the faithful is just how long the Vatican will continue to parade indefensible arguments that attempt to limit the reaches of God's call," Kate McElwee, executive director of the Women's Ordination Conference, told NCR.

According to British theologian John Wijngaards, "Yes, there is confusion among the faithful, but not because they doubt the validity of their inner sense of what is genuinely Christian and Catholic, but because the persons who are supposed to guide them keep ignoring their just concerns."

"Confusion is healthy if it leads to a process of honest reassessment," added Wijngaards, professor emeritus of Missionary Institute London and founder of the Wijngaards Institute for Catholic Research.

Janice Sevre-Duszynska, ordained a Roman Catholic Woman Priest in 2008, said, "Our movement is growing with enthusiasm among Catholics in grassroots communities, especially with marginalized LGBTI and divorced [Catholics], and all who seek a bigger table where God's beloved family gathers to celebrate sacraments and to serve their sisters and brothers in mutual love in a community of equals."

Both women priests noted that Ladaria's newspaper article coincides with the 10th anniversary of the Congregation for the Doctrine of the Faith issuing a general decree excommunicating the members of their movement and its supporters. The decree stated, "Both the person who attempts to confer holy orders upon a woman, and the woman who attempts to receive holy orders, incur the excommunication latae sententiae [automatically]."

YOU CAN READ, SMELL FEEL, TASTE AND SEE ALL  OF THIS COLON OUTPOURING HERE.

But as has been the case throughout Church history, those who've dissented from Church teachings are always correct...and the Church of Rome has always been wrong.

Women's ordination to the priesthood, Humanae Vitae, Amoris Laetitia...on and on...

...it's always the Bishops of Rome who have been wrong. The dissenters have never been wrong.

Could she have paid him a better compliment? Surely his principal function (and the pope's) is precisely to guard the Church's doctrines against anything new.

Mark Thomas, it took me almost 60 years, and this papacy of Francis, but I'm coming to believe that the "culture" has more influence on the Church than the Church does on the culture.

I find myself thinking a lot about the men and women that were my age when VII gleefully destroyed everything they had known, loved, and accepted as truths.

I think womyn priests, communion for everyone, married priests, trans-priests, "new and improved and more enlightened" theologies of every belief, will be shoved upon us.

Liberal parents rarely produce conservative children - over generations it's impossible. What we have are German bishops who seem totally shocked that the Vatican has delayed their inter-communion program... we have a pope who calls priests and catholics "rigid neo-pelagians" who still believe the things our grandparents believed. THESE are the individuals who are selecting and guiding the seminarians and future priests. THESE are those who marginalize the current clergy who speak out.

I think that the answer to Christ's question "Will the Son of Man find faith when He returns?" is SUPPOSED to be NO.

My faith in the institutional Church has been destroyed. ANY way Mark Thomas, that's my story.

I also believe that except for a microscopic amount of left-wing fanatics, nobody within the Church remains awake at night contemplating the issue of female priests.

Except for a relative few left-wing fanatics, nobody is consumed by the issue in question.

"How long can the Vatican hide behind its sexist arguments that because Jesus was a man, he intended only men to become priests?" the statement read.

I know fellow parishioners who seem surprised that the Church has a teaching AGAINST the use of birth control, and these are not the Christmas eve and Easter only Catholics. We have a Vatican giving appointments to priests like Fr. James Martin. So tell me. How is the future going to suddenly become Catholic for the Church?

Dan, ditto. Christ knew the answer to His question...most people I know, even professed Catholics/Christians, live as if there were no God. Everybody is going to Heaven, doncha' know. Why, a good God would never send good people to Hell, now, would he?

God might make an exception for "you know who!"

Mark Thomas, you are right that the majority of Catholics would accept women priests... however this is not what the Church has taught, and the Church has great theological arguments for this teaching. Just because everyone ignore's the teaching and accepts lies as truths, doesn't make it right.

After Ordinatio Sacerdotalis, these loons need to give it a rest. It's over, finito!

After Vatican Disaster II the Church hierarchy lost the desire or will to teach the true faith. They are responsible for the widespread ignorance of the Catholic laity (and most clerics)