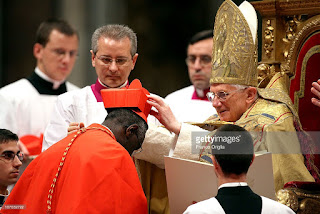 We know that the Pontifical Mass in the Ancient usage celebrated by Cardinal Robert Sarah allowed some things that EF purists simply can't digest.

However, I think that Cardinal Sarah knows that more people will be engaged in the EF Mass if some minor changes are allowed.

Thus, "Jake" on the post on Cardinal Sarah's liberties tells us that there were other liberties taken too.

I think these liberties would open the door to more bishops celebrating this Mass as it is a form of "noble simplicity" that Vatican II actually endorsed.

It appears that Cardinal Sarah followed the 1968 Instruction 'Pontificales ritus', i.e. he pontificated sans gloves, buskins and sandals, gremial, and restricted himself to the use of a single mitre.

Moreover, the Cardinal encircled the (rubrically correct) freestanding altar (without gradines or faux tabernacle!) during the incensations. In doing so, the Cardinal, intentionally or not, highlighted that the concept of a freestanding altar (rubrically correct according to the Tridentine books) and the position of the priest vis-à-vis the altar and congregation are two separate issues, which are often conflated.

My final comment: If we want the EF Mass to have more parishes celebrating it, some common sense adjustments should be allowed and Cardinal Sarah is preparing the way!
Posted by Fr. Allan J. McDonald at Tuesday, June 19, 2018

In no way is it a "liberty" or "adaptation" for the TLM celebrant to encircle a free-standing altar while incensing it. That is the proper and traditional way. Fortescue (the "liturgical bible" in English) has an elaborate diagram showing the positions of the 29 specified swings of the thurible the priest makes as he encircles the altar in a counterclockwise direction.

A facing page shows how those 29 positions are altered for an altar against a wall. But the free-standing altar is older and more traditional (as in all the major Roman basilicas).

And Fortescue's free-standing altar diagram shows only the altar cross and 6 candles, but no gradine or faux tabernacle, which could be described as "faux traditional", there being no justification for them in traditional practice.

Henry, I have seen similar drawings to those you describe at the front of missals published in the second quarter of the Twentieth Century, which presumably reflect the impact of the "classical" phase of the Liturgical Movement. Geoffrey Webb's 'The Liturgical Altar' (1933) recovered the noble simplicity of the Roman altar, according to the Tridentine rubrics, and was quite influential at the time.

In his renowned 'Instructiones' on church building St Charles Borromeo recommends that the high altar of a church be at least one and a half cubits from the sanctuary wall; a gradine (a shelf for the altar crucifix and candlesticks) was only permissible if the high altar was two cubits or less from that wall (an annotated translation of Borromeo's 'Instructiones' can be found at www.http://evelynvoelker.com).

A good example of adaptation that our host, Fr McDonald, describes can be seen at the traditionalist abbey of Barroux which uses the 1962 'Missale Romanum' but apparently with the 'Caeremoniale Episcoporum' of John Paul II (1984?). For example, there is no canopy over the abbatial throne; and the crosier is used at pontifical obsequies (this is forbidden in the older books). Interestingly, the tabernacle at Barroux, likewise at its daughter house (?) Clear Creek, is not on the freestanding high altar but on a pedestal directly behind it.

The "faux traditional" can be an unnecessary obstacle to the process of normalizing the EF.

Thank you for the link to a translation of Borromeo's 'Instructiones', of which I was unaware.

I believe that Clear Creek is a daughter house of Fontgombault rather than Barroux.

I fail to see how discarding certain items of episcopal apparel can make the old Pontifical High Mass more 'acceptable' to those unfamiliar with it. Surely the reason for the simplification of the ceremonial was to enable a bishop to celebrate a Sung Mass in an ordinary parish setting (few parishes had the resources to stage a PHM).

Inter Oecumenici (1964) allowed bishops to celebrate Sung Mass in the same way as priests. This strikes me as a sensible measure, and if it were applied retrospectively to the 1962 Rite it might solve a few problems. Cathedrals and larger parishes could still perform the full ceremonial (which can look a bit fussy to the uninitiated, and requires everyone to know their roles perfectly).