SOMETHING SMELLS FISHY IN DENMARK, I MEAN, CHICAGO: VERY SUSPICIOUS TO SAY THE LEAST--WE'RE NOT A CULT, SO HOPEFULLY FR. PHILLIPS WILL SET THE RECORD STRAIGHT, SWORN TO SECRECY OR NOT!

FROM THE CHICAGO TRIBUNE: 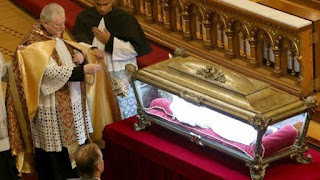 The Rev. C. Frank Phillips, founder of a religious order and pastor at St. John Cantius Catholic Parish, has been removed from his priestly duties after an investigation, according to a letter distributed to parishioners.

A letter from Gene Szarek, the provincial superior of the Congregation of the Resurrection — the Resurrectionist order, of which Phillips is a member — was distributed over the weekend inside bulletins at the Goose Island neighborhood church. The letter informed churchgoers that the order’s review board, which looked into allegations of improper conduct involving adult men made against Phillips, had heard from those involved and submitted its conclusions to the Archdiocese of Chicago.

Phillips will be receiving support and residing at a Resurrectionist facility away from the parish, 825 N. Carpenter St., according to the letter.

Phillips was removed from his priestly duties in March by the archdiocese amid an investigation, and was required to live away from the parish at a location determined by his order. On Friday, Phillips’ attorney Stephen Komie said he had been “cleared 100 percent” by the review board.

Komie said the review board found Phillips had not violated any civil, canon or criminal law and that there was “no justification” for the allegations.

Although Phillips was not found to have violated any church or secular law, archdiocese spokeswoman Paula Waters said there was other information that warranted his removal and a continued ban on his administering sacraments in public within the archdiocese. Waters declined to detail the findings against Phillips.

“There are standards for behavior,” Waters said. The review board “did not recommend that he be returned as the pastor of St. John Cantius. And so, based on their recommendation that he not return and on other factors, the cardinal decided that his faculties to minister would remain withdrawn.”


Komie disputed the archdiocese’s claim that the review board recommended he not be reinstated.

“They did not make any recommendations,” Komie said. “They returned a straight report.”
Phillips is currently in Rome consulting with members of his congregation, Komie said.

Last week Phillips’ supporters celebrated what they viewed as news of his exoneration. Andrea Eisenberg, a member of Protect our Priests, a nonprofit that was started in the wake of Phillips’ removal, said Thursday the group was “overjoyed” to see Phillips’ name cleared.

However, the more recent news of Phillips’ removal has left longtime parishioners shocked.

When Eisenberg read the letter in her church bulletin before Saturday’s 4 p.m. service, she said she threw it down into the pew. Eisenberg, who has been attending services at St. John Cantius for about four years, said the decision to uphold Phillips’ removal felt vindictive and punitive.

“We felt really betrayed,” Eisenberg said. “We trusted in the system and church leadership and we felt like we were let down.”

David Carollo, a parishioner of St. John Cantius for more than 30 years, said the decision to remove Phillips was “puzzling” and “contradictory.” Carollo met his wife at the parish, and Phillips — who has become a friend as well as his pastor over the years — presided at their wedding, he said.

“A reputation is a difficult thing to get back. That's part of the problem here,” Carollo, 63, said. “I find it hard to believe there’s any wrongdoing by the father. That’s not the man I know."

Waters said Phillips will not be reinstated in the foreseeable future.
A representative of the Resurrectionists referred questions to Komie.

Carollo said Phillips’ impact on the church can’t be overstated.

“He took a parish that was on the chopping block. Attendance was low,” Carollo said. “He came in there and he introduced the traditional Mass again. He helped bring a lot of people back.”

Phillips founded the Canons Regular of St. John Cantius, a group devoted to preserving the traditions of the Catholic Church, in 1998 with the approval of Cardinal Francis George, according to the group’s website.

In the wake of Phillips’ removal in March, his supporters rallied around him financially too. The nonprofit Protect our Priests has collected donations in a legal defense fund to help pay for Phillips’ legal expenses. Eisenberg declined to say how much money the defense fund has raised, but said support has been “surprisingly generous.” Nearly $7,800 was raised as of early Monday afternoon through a GoFundMe campaign that aimed to help pay Phillips’ legal bills.

I think the following comments from a well-informed St. John Cantius parishioner are worth quoting verbatim:

"So what actually happened?

"Based upon what I know and have learned (independent of the recent press release from Protect our Priests), I am confident that Fr. Phillips is completely innocent of any wrongdoing, with "wrongdoing" interpreted in any way you wish - legal, civil or moral. And, yes, this also covers consensual sexual behavior as well as homosexual actions or behavior of any kind. [original ital emphasis}

"The false charges were made out of malice by an extremely troubled individual who had also enlisted two allies. Soon, the allegations would be seized upon by hostile forces in the Chicago Archdiocese and elsewhere as an opportunity to attack and destroy an incredibly successful traditionalist pastor and (perhaps later) the traditionalist order that he founded and the old Chicago church that he saved from the wrecking ball and turned into one of Chicago's most thriving parishes. [bf emphasis added]

"The final result was not based on justice but on politics.

"Catholic traditionalists and conservatives have assumed that the liberal Cardinal Cupich is somehow behind it all - not without reason, I think, given his past behavior and reputation. But I do not believe that blaming Cupich for all of it is correct, or at least, given what we know, entirely correct.

"Fr. Phillips had other enemies."

If Father Phillips was a left-wing loon (see Father Phlegher) and committed manifold liturgical abuses and spoke heresies, Cupich would have carried Father Phillips on his shoulders back into the Church.

But it was conservative Cardinal George that did that, TJM.

Cardinal George couldn't carry anyone over his shoulders having had polio since he was a young boy. George tried to removed Phlegher but there was such an uproar from the looney left that he left him there as "senior pastor" but installing another priest as the canonical pastor. It was the only time I was disappointed in Cardinal George. I think he should have suppressed the parish since it was no longer in Communion with the Church anyway and given Phleger the boot. Phleger is certifiable. He's rabidly anti 2nd Amendment but curiously has his own armed guards.

Let's see, the investigation proved the good priest did nothing wrong, civil or with church law.....hmmmm.....The pontificate of mercy TM Chicago style :p

Here is an example of liberal "mercy" from Archbishop Cupich who sua sponte decided not to restore Father Phillips to his role as Superior of the Canons Regular of St. John Cantius: