DO PROGRESSIVE CATHOLICS, OFTEN HETERODOX ABOUT CHURCH DOCTRINES AND MORALITY, PREFER THE HORIZONTAL LITURGY BECAUSE IT EMPHASIZES CONCERN AND OUTREACH FOR THOSE ON THE PERIPHERY OF SOCIETY, THE POOR AND MARGINALIZED, WHICH HETERODOX, PROGRESSIVE CATHOLICS TAKE GREAT PRIDE IN SERVING THE POOR? AND DO TRADITIONAL, ORTHODOX CATHOLICS WITH THEY LOVE FOR THE VERTICAL LITURGY CARE LITTLE TO NOTHING ABOUT THE PERIPHERIES AND HELPING THE POOR? I WONDER? 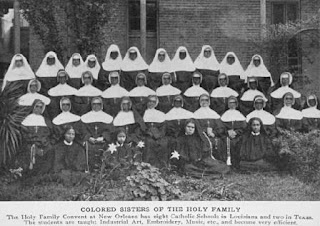 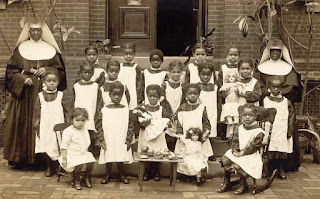 In the 1970's it was the radical Catholics who had a passion for the social issues confronting the world as it concerns the poor, marginalize and their causes such as just wages, liberation of women and feeding the poor. Their liturgies were heterodox and extremely horizontal to symbolize their social work at the peripheries of society.

But is this true of the pre-Vatican II Church? Did we give a flip for the poor and marginalized back then?

Most certainly we did and the vertical Liturgy supported this Catholic Action apostolate.  The poor were taken care of in spectacular ways by religious orders in long, habits---the active religious of the day.

They founded orphanages, soup kitchens, built hospitals and located Catholic schools in some of the poorest neighborhoods.

Think of Dorothy Day, by all accounts a liberal progressive of her day for her concern for the poor and marginalized, who loved the Tridentine Mass and was not pleased by the spirit of Vatican II renewal of it when she first experienced it.

My former parish of the Church of the Most Holy Trinity was an amalgamation of three downtown parishes in Augusta into one.

In that period from approximately 1912 to the closing of the parish in 1971, scores of Protestant African Americans where educated at a minimal cost by these Sisters and priests. Many of them were evangelized into the Catholic Faith not only by the superior education they received from First Grade to the 12th grade, but the the Tridentine Mass they attended as children. These African Americans loved the Tridentine Mass and many of them, like Dorothy Day, were not please by the changes in the Mass according to the spirit of Vatican II renewal and were aghast when they were told they needed to have their Protestantism of their former days dragged into the music of the Mass-Gospel Music and Gospel Masses.

I would dare say, we had more African Americans becoming Catholic prior to Vatican II than today especially in the south and in my Diocese. It is negligible today.

What was it that these pre-Vatican II African Americans loved about the Catholic Church that motivated them to answer God's call to become Catholics? It was a combination of the horizontal in our Catholic schools at the time and the vertical in the Holy Sacrifice of the Mass with its Latin, Gregorain Chant and incense.

It was about religious priests and sisters in long habits and all the customs of the Catholic Church prior to Vatican II--most now, completely gone with the wind as are African American Catholics.
Posted by Fr. Allan J. McDonald at Wednesday, May 31, 2017

But wasn't the Catholic Church in Georgia segregated in those days (for most of the 192-1971 period of that parish)? Blacks probably were not too welcome at many white parishes, or they were urged to sit in the back and go to communion last? You did not see black students at the 1939-1957 Boys Catholic High School in Augusta, or when Aquinas opened up there in the fall of 1957. I mean, were there really that many black Catholics in the so-called "good ol days" prior to the mid 1960s?

Blacks historically have been predominantly Baptist and Methodist---and that was true also in the so-called glory days of pre-Vatican 2. And it certainly is true today.

Unfortunately, there also was some anti-Catholicism among blacks in the old days, and sometimes in the current era too. The father of Dr. Martin Luther King Jr, admitted in 1960 (when JFK was elected) that he had some reservations voting for a Catholic, but JFK's work to get his son released from Reidsville (state prison) in the waning days of the 1960 campaign made the difference. Occasionally, though, you can see some fundamentalist black ministers up here railing against Rome, just like many white ones did in the time of JFK.

Yes there was segregation. After desegregation in the 60's black parishes and sclools were the ones. Posed to integrate white ones and Augusta was no exception. This in a since curtailed black converts to the faith in those days.

In order to integrate white parishes and schools

Of course Catholics with a long enough memory (or older than 70) can recall a time when many churches practiced a type of "Jim Crow" segregation. Even as far north as Kansas, St. Benedict Abbey used to have a Mass in its basement for black Catholics. However, I think we should note that there was NEVER an OFFICIAL policy of segregation in the Catholic Church, but it was often done as a concession to the local norms of the culture in a given place.

I think it also important to note that, in spite of the shameful example of many Catholics during the age of exploration, the Church condemned the slave trade as early as 1435 with the papal bull Sicut Dudum.

So why was the Church more successful, EVEN THEN, in evangelizing black people? I don't purport to know, but if I were to venture a guess, I would say that the Church had its priorities straighter and put more emphasis on the salvation of the soul and the practice of various virtues, including "bearing wrongs patiently"--something we hear little about these days, since our entire emphasis seems to be on social justice and "rights". I'm not trying to justify the mistreatment of black people or any other marginalized group, but just pointing out that evangelizing was much more effective before the diabolical disorientation that has infiltrated our Holy Church.

Much of what passes for "African-American" ministry today in this post-Vatican II world is completely condescending and a complete turn-off, at least in my opinion. If I wanted protestant music, or protestant theology, I'd simply become protestant.

As I like to say, there are various ways to care for the poor, that doesn't mean letting the government do everything, nor does it mean one absolutely must work at a soup kitchen. Poverty of the soul is just as much of a danger, if not a bigger one, and something needs to be done about that. Truth itself is attractive unto itself, and beauty attracts, this was not a problem prior to Vatican II. In the Post Vatican II world, there's been a dilution of Truth often at the expense of beauty.

Why would anlyone trade up for a liturgical experience that they're already experiencing in their various protestant sects. More will come to the Faith, when we know who we are on the inside as Catholics. We can't give what we don't have.