IF ONE DOESN'T BELIEVE THAT JESUS IS DIVINE, THEN THE LITURGIES OF THE CHURCH WILL REFLECT IT 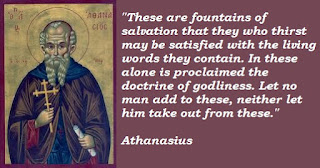 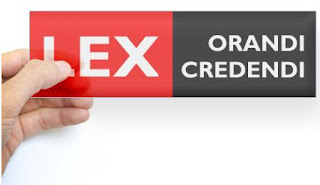 Lex Orandi, lex credendi. The law of prayer is the law of belief. At the heart of the liturgical malaise in the Church might well be Arianism which St. Athanasius, the Father of Orthodoxy (maybe some in high places in the Church of the spirit of Vatican II kind would call him the Father of Fundamentalism?) combated the Arian heresy.  It was probably about the year 323 that one Arius, a priest of the church of Baucalis, began to teach that Jesus, though more than man, was not eternal God, that he was created in time by the Eternal Father, and could therefore be described only figuratively as the Son of God.

The only thing that can explain how the ethos, spirituality and devotional qualities of the pre-Vatican II Mass, now known as the Extraordinary Form, which had a basis in a very high Christology, meaning a high understanding of the Divinity of Christ as on Divine Being, first and foremost with two natures, human and divine,  became so warped by the "spirit" of Vatican II's implementation of reforming the timeless Mass is that the heresy of Arianism reared its ugly head immediately and continues to do so.

The only explanation for the low Christology of the Mass today with its ensuing banalities, casualness and irreverence and loss of a sense of the divinity of Christ is precisely a loss of Catholic Faith as expressed by the Father of Orthodoxy.

Why would anyone follow someone as though He is God when they don't believe He is God but only Godlike?

Perhaps this accounts for the fact that in Belgium only 5% of Catholics attend Mass content that Jesus isn't really God whereas the 95% who don't attend don't see any reason to do so. If I didn't believe Jesus is co-eternal and co-equal with the Father and Holy Spirit, I'd cease being Catholic too.

But if I wanted some low rituals in my life and a community of people to which I am attached, maybe I would go to Mass.

Isn't the loss of faith in the true nature of Whom Jesus is, the primary reason that has led to the decline in the number of Catholics who actually practice their faith? And the ones who have stayed, how many of them are actually orthodox as St. Athanasius would have defined Catholic orthodoxy?
Posted by Fr. Allan J. McDonald at Tuesday, May 02, 2017

Oddly enough, the Arians maintained the same liturgy as the Church. Part of what helped defeat them, though, was the fact that the lay faithful had been properly inculcated in orthodoxy by the liturgy that they knew that the Arian beliefs were not in line with what the liturgy said.

It's really interesting that the liturgy informed the faith in those days. So much so that, in his history of the development of doctrine, Jaroslav Pelikan remarks several times that the doctrinal formulation from the liturgy predates the settlement of the doctrine. In other words, the liturgy was orthodox even before the parameters of orthodoxy were resolved -- this is especially true with regard to Arianism and other early trinitarian heresies.

Whereas, the problem with the new liturgists is that, instead of letting liturgy form them, they want to use their beliefs to form the liturgy.

In concert with your previous post I observe that there is plenty of Spiritual, and plain old informative, content in the EF. The OF missals are larger and have three cycles but we rarely hear sermons expanding on their content and lessons. They are meringue to the EF sourdough.

That being said, the Spiritual content of the older form was not as evident to the bishops of the twentieth century who worked at that change until it was secured at Vatican II. While I completely disagree with that position I have to acknowledge it and also acknowledge it is still the dominant position and quite strongly held by the overwhelming number of bishops and other clergy.

Dr. Bill Cummings questions just that very topic this past Sunday in the Macon Telegraph.

"That being said, the Spiritual content of the older form was not as evident to the bishops of the twentieth century who worked at that change until it was secured at Vatican II."

Au contraire, a reading of accounts of Vatican II (e.g., Wiltgen's "The Rhine Flows Into the Tiber") suggests an awareness of the spiritual emphasis of the old Mass was precisely the reason some wanted to change it. This came mostly from German and other northern Europeans with the same desire for secularization seen in the German bishops today.


God, in His Person of Christ Jesus, became incarnate in a temple of flesh and blood, constructed within the worthy place He had prepared, which was the Blessed Virgin. This human temple which He inhabited, in the inseparable unity between His Divine and human natures, was eventually demolished by the power of the evil of sin. This is how it was to be, by what God knew was necessary to redeem and ransom mankind from slavery to sin and its deadly consequences. Jesus had said,“Destroy this temple and in three days I will raise it up.” but those that heard this did not
understand He was referring to His own body. Yet in speaking of His resurrection, He was speaking of something much greater than raising up an earthly temple.
In three days He did raise up a new and splendid and glorious Temple, rising in splendor on that Glorious morn in the New Day of Salvation. The Temple in Jerusalem which would be destroyed in due time, would be replaced by a new and glorious Temple,which was God's Holy and Catholic Church,the Temple of Christ's Mystical Body, since the New Covenant would now stand in place of the Old Covenant.

Henry, you are driving to medicate.