I HAVE TO SAY THAT I FELT THE SAME WAY WHEN I READ POPE FRANCIS' WEDNESDAY HOMILY! 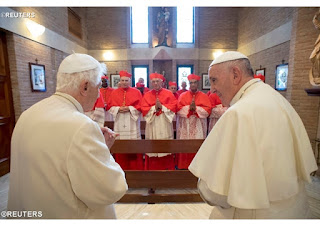 In fact, I emailed a friend about my feelings, that it was either Pope Francis' paving the way for his resignation, or a word of warning veiled in a homily to Pope Benedict who seems to be more vocal than before and more concerned than before and advocating a two-pronged papacy, contemplative that He is and active as Pope Francis is.

Pope Francis is known for using his daily homilies for personal therapy and as a weapon against those who oppose him, like the rigid doctors of the law (and everyone knows who His Holiness means!)

And the rumors confirm my feelings as Philip Lawler indicates.

The Pope’s enigmatic words on resignation

By Phil Lawler  May 31, 2017
In his homily at Mass on Wednesday morning, commenting on St. Paul’s farewell to the Church at Ephesus, Pope Francis said:


A shepherd must be ready to step down completely from his church, rather than leave in a partial manner….
All shepherds have to step down. There comes a moment where the Lord says ‘go to another place, come here, go there, come to me.’ And it’s one of the steps that a shepherd must take; be prepared to step down in the correct way, not still hanging on to his position. The shepherd who doesn’t learn how to do this because he still has some links with his sheep that are not good, links that are not purified by the Cross of Jesus.

The homily as a whole focused on the role of a bishop, with the Pope insisting that a bishop must recognize that he is not “the center of history,” but a servant of his people and their Lord. Still those words about stepping down—and the emphasis on stepping down completely—caught the attention of many Vatican-watchers. Was Pope Francis speaking in general terms about the proper duties of bishops and pastors? Or did he have something more specific in mind?

If the latter, was he hinting that he might be considering resignation?

Or was he sending an oblique message to Benedict XVI, who seemed to be breaking his silence last week?

I don’t have the answers. But I am not alone in raising the questions.
Posted by Fr. Allan J. McDonald at Wednesday, May 31, 2017

He apparently thinks it's time to silence BXVI. I see no other reasonable interpretation.

I'm no prophet but I agree with anonymous: My gut instinct tells me that Pope Bergoglio is the type who would NEVER resign. They'll have to pry that office from his cold dead hands...so to speak.

1) If it a smack down for BXVI why not just pay him a visit or pick up the phone?

2) If it is a smack down, and it sounded that way, then I think it was directed to a lot of people and not just BXVI. There are lots of openings for clergy in Syria right now for people who need an attitude adjustment.

I'm with the previous anonymous. Three little words that are simply the truth.

I would hope Pope Francis would speak to Pope Benedict if Francis felt Benedict was inserting Himself into controversies Pope Francis is generating.

In my most humble opinion, though, it seems that Pope Francis uses the daily homily to go after people and it is obvious that His Holiness does this. I think it cheapens the papacy and the respect we should have not only for the reigning pope but the papal institution.

I also disagreed with Pope Benedict resigning. I think being the Bishop of Rome until death prevents former popes interfering with reigning popes no matter how well-intentioned it might be.

Many pastors have to contend with former or retired pastors who interfere with what the new pastor is doing or implementing. This is always wrong.

Also, if the shoe was on the other foot and a Pope Francis type pope resigned and a new pope more tradition oriented began to undo the previous pope's legacy, all he would have to say even years after the resignation is "I was pressured." Once again, popes should never resign to prevent this sort of silliness and interference in future popes initiatives.

The Papal Office was killing Pope Benedict, and we all know the SP would have died with him. I think he resigned in order to keep SP alive long enough to make a lasting impact on the liturgy. The longer it remains, the harder it will be to destroy. Pope Benedict is a very smart man, He knows what he is doing.

What does SP refer to?

SP refers to the Sumorum Pontificum that Pope Benedict wrote that permits all priests to celebrate the Extraordinary Form Mass without needing the permission of their bishops.

Well, if a good bishop knows when to step aside, and a bad one doesn't, does that, therefore make Pope Francis a bad shepherd?

I simply wish he (Pope Francis) take a few seconds to actually think before expressing anything, but that's probably too much to ask these days.