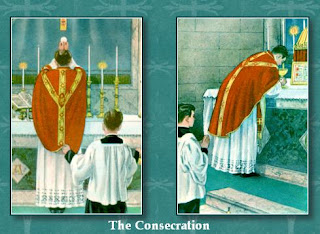 Causing great angst in high places, the once self-described entombed pope recently wrote a forward to Robert Cardinal Sarah's book that had already been published in other places without the pope's forward.

This is what His Holiness, Pope Benedict wrote about historical knowledge of the Bible:

Certainly, in order to interpret Jesus’s words, historical knowledge is necessary, which teaches us to understand the time and the language at that time. But that alone is not enough if we are really to comprehend the Lord’s message in depth. Anyone today who reads the ever-thicker commentaries on the Gospels remains disappointed in the end. He learns a lot that is useful about those days and a lot of hypotheses that ultimately contribute nothing at all to an understanding of the text. In the end you feel that in all the excess of words, something essential is lacking: entrance into Jesus’s silence, from which his word is born. If we cannot enter into this silence, we will always hear the word only on its surface and thus not really understand it.

Take it from someone who knows first hand how easy it is to be seduced by biblical scholarship and the means by which we are to understand the bible and yet miss entirely the point of Scriptures which can only be deduced in prayerful silence before so great an Experience--the Word of God made Flesh in time and eternity.

Shortly after I was ordained, I would use the great knowledge that was only recently allowed Catholic Biblical Scholars to debunk so much literalism and fundamentalism among Catholics. The academically inclined loved their god of academics and new academic freedoms and discoveries (although the Liberal Protestants of the Enlightenment used these methods in the 19th century--a part of the modernism heresy, not to be doctrinally rigid).

Who really cares about the science or lack thereof the the Old Testament or if Adam and Eve actually existed or the world was created in six days with a day of rest on the 7th. Just as long as one gets the authentic message behind the words, the symbolism and even parables, that is what is important--and this had to be in continuity with Catholic Faith found in defined doctrines and solemnly defined dogmas--no if's and's or but's about it.

The same is true with liturgical scholarship and the iconoclastic liturgists of the post Vatican II period. In an ad orientem Mass no one sees what the priest is doing, either the use of hands to call upon the Holy Spirit to change the bread and wine or the various signs of the Cross over the unconsecrated and consecrated host and chalice. All that was seen were the two major elevations--that is it. What use is it to see what the priest is doing during the Eucharistic Prayer or even to hear the Eucharistic prayer which in the EF version of the one Latin Rite is prayed silently?

Does the congregation need to see the Fraction Rite, which has become so important for some liturgists and celebrants who use extra large hosts to make the point?

But let's get back to the silent Canon. This is what Pope Benedict seems to imply in the message above:  If we cannot enter into this silence, we will always hear the word only on its surface and thus not really understand it.
Posted by Fr. Allan J. McDonald at Tuesday, May 23, 2017

IN SILENCE I hear the personal intimate words from the LORD. The words which I need at that moment at my stage of development of my conscience. GOD BE PRAISED. Forever and ever.