BACK TO THE MOST IMPORTANT ISSUE CONFRONTING THE CATHOLIC CHURCH--HOW HYMNS BECAME THE FOCUS OF A SUNG MASS! 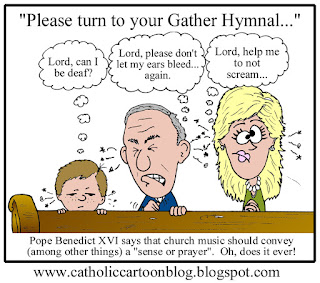 I wrote in an earlier post that Folk Music of the 1960's which started to be sung at the Tridentine Mass prior to revised 1970 missal is what began the movement towards dividing parishes and families according to musical tastes or lack thereof.

For proof of folk music during a Tridentine Mass, here it is (I suspect that even though this is a movie, the director incorporated actual Mass scenes into this Elvis Presley movie scene:


But we all know that the Tridentine Mass had only three expressions--the Low Mass, where none of the Mass was sung; the High Mass that all parts of the actual Mass are sung and the Solemn High version with deacon and subdeacon and elaborated choreography.

However, at a Sunday morning Low Mass prior to Vatican II, four vernacular hymns could be inserted at the entrance, offertory, communion and recessional. Usually the only hymns allowed where explicitly Catholic devotional vernacular hymns to include popular Marian hymns, many of which drip with sentimentality but beloved nonetheless. But the entire Mass itself was spoken.

It was this low Mass template that was then made the norm for the revised Mass, even though allowance for some parts of the Mass to be sung in a hybrid fashion, unheard of prior to Vatican II was allowed for the first time.

Thus most Catholics were told we didn't have enough Catholic vernacular hymns and we had to, just had to, borrow from the Protestants their hymn tradition (but of course this was an ideology of ecumenism be shoved onto the Catholic Mass and its spirituality and devotional qualities often at odds with Protestant  devotional dripping sentimentality). And of course the gestapo liturgist told us that Marian hymns and other devotional hymns had no place in the Mass since the Mass focused on Jesus and His meal. (Of course, no hymns had a place in the sung Mass, but I digress!)

Thus an explosion of Protestant hymns and folk music by homegrown artists and well, you know the rest of the story--hymns and hymnals become big business guided by the almighty dollar and music becomes the most divisive issue in the Catholic Church all hinging or becoming unhinged on parishioners, musicians and clergy's tastes--subjective tastes at that!
Posted by Fr. Allan J. McDonald at Sunday, May 28, 2017

Low Mass for our family this morning. No hymns, thank goodness!

The Mass in the film isn't the Tridentine Mass. it is the interim Mass. The film was made in 1969 and at various points in the movie you can see the free standing altar that was being used at the time. They simply removed it for this scene. Probably because it looked better on film. By the time this film was made the Mass was celebrated everywhere facing the people, the entire Mass was in English, including the canons. Just the bare boned remnants of the Tridentine Mass remained. Funny to think that just 7 years prior to this film everything in it (habitless nuns, rock bands in church etc) would have been unthinkable.

The idea was "active participation". All the people had to sing in the vernacular at the liturgy to participate fully. This meant singing songs that were easy and accessible for everyone, such as folk songs and Protestant hymns (even though many Protestant congregations would sing their hymns in 4 part harmolny, something inconceivable for Catholic congregations even today). It was all about the people first, and giving glory to God as an afterthought, if it occurred at all.