TOO FUNNY! ITALIAN NEWSPAPER,L'ESPRESSO, CALLS PHOTO "THE ADAMS' FAMILY"! Trump and Francesco are two populists but very different from each other (by A.Gilioli) 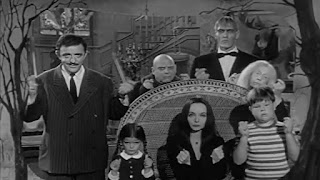 Google Translate, blame them not me!

He joked very much yesterday about the social networking of this papa's photo next to Trump and his wife, wife and daughter, both of them brave as the Addams family, while Trump almost grunted and Bergoglio seemed to want to be somewhere else.
But in addition to the loudest expression, Francesco gave the American president no "one of his book on the environment," as they say generically, but that encyclical Laudato Yes, that is exactly the opposite of what he says and that makes Donald Trump .
I do not know if that encyclopaedia has ever read it, it is free on the net, but in its foundations it is the clearest, determined and radical manifestation against the economic paradigm based on resource exploitation, fossil fuels, excess waste And - attention - also over the excessive social gap.
In that encyclical, in fact, the pope tells us every seven lines that between these two things - exploitation of the planet and social injustice - there is a close connection, not just philosophical but practical, political, daily.
Bergoglio essentially explains that in the world there have always been two opposite views of the relationship with nature. One based on the idea that this is at the service of the man, who therefore has full right to exploit it as long as he finds it; The other is based on the conviction that humanity must preserve nature and take care of it as part of it.
And the Pope adds that this dialectics is today incarnated in the clash between current capitalism and another model of economic, environmental, and social relationships in which ecology of the planet is also social ecology: today's capitalism has created a system in which , At the same time, the planet is exploited and then only a small part of humanity benefits from the wealth produced by this kind of development.
Now, Trump is unlikely to read the text that Bergoglio gave him, since he is longer than a tweet.
But let's say if it is true - as they say - that two "populist leaders" met in Rome yesterday, it is clear in this case that not all populisms are the same.
Posted by Fr. Allan J. McDonald at Thursday, May 25, 2017

Guess who looks most like Uncle Fester? I'm just sayin'

I was interested to learn that, not through upbringing--but somewhere along the line, Melania Trump became a Catholic. This was reported in the UK's "Daily Mail" and in the "Washington Post."


DailyMail.com reveals that Melania Trump is a practicing Catholic--the first to live in the White House since JFK and Jackie.

"Now we know one reason why the first lady began with 'Let us pray' and 'Our Father who art in heaven' when she introduced the president that evening: She's a practicing Roman Catholic. Her spokeswoman Stephanie Grisham confirmed that to DailyMail.com on Wednesday, hours after Pope Francis blessed a rosary for her at the Vatican."

I had wondered about her religion given her European birth. However, has their marriage been blessed in the Church, meaning annulments for Pres. Trump? Does Melania have previous marriage(s)?