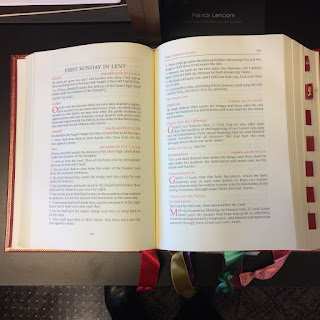 "The Responsorial Psalm and the so-called Gospel acclamation, along with the third lesson, are part and parcel of the 1970 Lectionary. The first two may of course be substituted by the Gradual and Alleluia/Tract as found in the Graduale Romanum (or even in a simpler setting).
Are you advocating a return to only two readings on Sundays? If so, it might make sense to return to the traditional Roman lectionary."

I am advocating a renewal in continuity for the reformed lectionary but only for Sunday. The revised weekday lectionary is far superior and richer than the EF's daily Mass lectionary which for the most part is almost non existent. The revised lectionary would need the Gradual and Alleluia/Tract though.

What I dislike about the revised lectionary is that too many readings are thrown at us which does two things: it makes the Mass more wordy and classroom like and thus less mystical and inspirational and it throws too much at the laity to digest often with the second reading not relating to the Old Testament or Gospel reading, except maybe during the Easter Season.

I think there is nothing wrong with the Sunday EF lectionary and it could be easily adapted with some minor changes to the revised Roman Calendar. But I would miss all the Old Testament readings we have heard with the revised lectionary. So an "Old Testament"year could be added with Gospels that are not in the EF lectionary. I think we would only need a two year cycle or readings if this actually were to happen.

At Requiem Masses, I do not encourage three readings.Two readings are sufficient plus the responsorial psalm. But as I have written, the responsorial psalm is tedious with all the refrains and unnecessarily long with its useless repetitions. Even if we kept the Psalm and only had the refrain at the beginning and the end with the Psalm chanted straight through, this would be an improvement.

However, the current crop of responsorial psalms could be used as Communion Chants allowing the congregation to sing the refrain as they approach the communion rail.

But, yes, since celebrating the EF Mass with its Gradual and Alleluia/Tract, I have found these much more meditative and less tedious than the long responsorial Psalm.
Posted by Fr. Allan J. McDonald at Monday, May 01, 2017

I happen to own a Graduale Triplex (basically a 1974 Gradual with the neumes of Laon and St-Gall added above and below the stave). However, for all practical purposes all a parish schola needs for the OF is the Solesmes Gregorian Missal, first published in 1990 and now reprinted with the new translation. It covers all Sundays and major feasts (including the Sacred Triduum) and provides not only the chants but all the prayers of the Latin Mass. For those who frequent the Novus Ordo in its sung Latin form, this is a must-have. It references the readings but does not print them, since they are likely to be in the vernacular anyway.

You are quite likely to encounter the Sung Latin OF Mass in London, and it will normally use the chants from the Graduale, not the Lectionary options. For the EF a schola is more likely to use the Liber Usualis which also enables one to sing the Office on Sundays and major Feasts. Before criticizing the Roman Rite for its lack of a weekday lectionary outside of Lent (the Epistles of which are drawn from the OT and are lengthier than anything found in the Novus Ordo) remember that most weekday Masses in the EF are from the Proper of the Saints, each with its own Mass.

By the way, in Lent the Tract is neither said nor sung on weekdays.

There are many U.S. parishes that use either the Simple English Propers or the Saint Isaac Jogues Illuminated Missal, Lectionary, & Gradual for the Novus Ordo, both of which include the Solesmes 1989 English translations of the Gradual/Tract/Alleluia (and the other propers) from the 1974 Graduale Romanum.

The Saint Isaac Jogues contains both the Latin of the 1974 Graduale propers and the Solesmes English side by side. Two parishes (that come first to mind) which use the St. Isaac Jogues are the Basilica of Sts. Peter & Paul in Chattanooga (TN) and Prince of Peace outside Greenville (SC).

Incidentally, the 1974 Graduale Romanum which "completes" the 1970-2002 Missale Romanum with the proper chants is no mystery--it's on-line for free download at

"HOW COULD EVERYONE just 'forget' about the Roman Gradual? Let me explain, and I promise to be clear and to the point. Before the Council, the entire Liturgy could be found in one book: the Missal. However, the post-conciliar liturgy has three books: (1) Lectionary, containing the Readings; (2) Sacramentary, called a 'Missal' starting in 2011; and (3) Roman Gradual, containing the music for Mass. Pretty basic, right? Old Rite had 1, New Rite has 3. So, what’s the problem?"

"However, the current crop of responsorial psalms could be used as Communion Chants allowing the congregation to sing the refrain as they approach the communion rail."

Singing as they approach the communion rail? What a simply horrid thought. Would not a serious communicant be deep in prayer while approaching the communion rail? Indeed, the time for private reflection while waiting for the priest to approach, is an indispensable (for me) benefit of kneeling at the communion to receive.