WAS THIS MASS BY BLESSED POPE PAUL VI REALLY ALL IN ITALIAN? I CAN'T GET A STRAIGHT ANSWER ANYWHERE!

Tomorrow Pope Francis will commemorate the first Italian Mass by a pope, actually Blessed Pope Paul VI at an Italian parish for the First Sunday of Lent, March 7, 1964.

So in 1964 did Blessed Pope Paul VI pray aloud the mandated by rubrics, the quiet parts of the Mass, meaning the private prayers of the priest to include the Roman Canon in Italian or Latin???????

Please note that in 1964 in this Italian parish Church, Blessed Pope Paul VI faces the congregation for Mass but has the beloved traditional altar arrangement, although modified by lower candles and crucifix on the altar, what has come today to be called the "Benedictine altar arrangement." 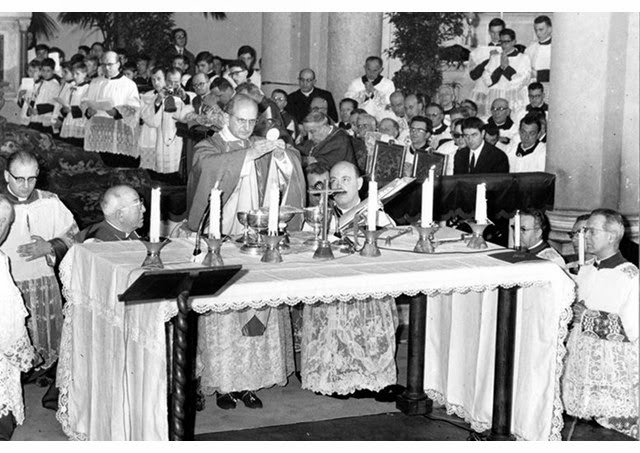 My comment first: (Please note in the reporting the pre-Vatican II papal triumphalism concerning what Vatican II had decided and how this would bring Utopia to the Church! Only a few years later, Blessed Pope Paul VI would be chastened as he met the ugly reality of what was happening to the post-Vatican II Church and the vernacular liturgy that was to bring Utopia!

(Vatican Radio) On Saturday March 7th, Pope Francis travels across Rome to mark fifty years since an historic event for the Catholic Church took place in the Roman Church of 'Ognissanti'.

It was the morning of the 7th of March 1965, the first Sunday in Lent of that year when in this very same Church Blessed Paul VI celebrated Holy Mass for the first time in the vernacular rather than in Latin, as was the custom at the time.

Listen to a programme presented and produced by Veronica Scarisbrick:

"As you witnessed this morning", he said on this occasion, “the spoken language has officially entered the liturgy in all parishes and churches. Across the world this date marks the first time a new way of praying, of celebrating Holy Mass has been inaugurated. It’s a great event, one that will be remembered as a new commitment in the great dialogue between God and man".

This event came as the direct result of the discussions of the Council Fathers during the Second Vatican Council. One which had been called for by Saint John XXIII on January 25th 1959 and was to meet for about ten weeks from 1962 to 1965 in the autumn of each year.
But as John XXIII was soon to pass away in June 1963 it was Blessed Paul VI who found himself with the task of taking on this Council, bringing it to an end and finally implementing the Council documents.

Documents such as the first one, the Constitution on the Sacred Liturgy, in Latin  ‘Sacrosanctum Concilium’ of December 4th 1963 which was approved at the end of the second year of the Council. In this programme you can listen to the sound of the result of that overwhelming majority vote that took place in Saint Peter’s Basilica as well as to the words of Paul VI which followed in Latin.

But getting back to the Church of ‘Ognissanti’ Pope Francis visits Saturday, Paul VI specified how on that day his hope was that novelty which he described as a great liturgical reform would bring about an authentic spiritual renewal in the Church.

I had this EXACT same question at Fr Z's blog!

And another thought: judging from the number of candles on the altar, would it be fair to assume this was not a spoken Mass?

You are right and in addition to that there is the traditional "episcopal" candle on the altar. It could well have been a high Mass or a sung Mass, but not solemn high, meaning a deacon and subdeacon present.

If you note too, there is an "ambo" to the left of the altar indicating that it was used for the readings.

In the 1965 Missal, it was permitted after the Prayers at the Foot of the altar (which omitted Psalm 42, which is what is done at Requiems and during Passion and Holy Week)for the priest to go to the chair for the Kyrie and Gloria. but this was common or required in Episcopal Masses even with Roman Missals prior to the 1962 Missal.

So many darn questions and no darn answers!

The English translation is:

..The new rite of Mass states that the faithful know (how to) sing 'together, in the Latin language, at least the parts of the ordinary of the Mass, and especially the symbol of the faith (Credo) and the Lord's prayer, the Our Father".

It is interesting how progressives overlook Blessed Paul VI's subsequent requests, although His Holiness should be faulted for not mandating it in the vernacular Roman Missals of 1970!

Witnessing the rapid decolonization of the world, the establishment of popular democracy in Europe and the bi-polarization of nations between the USA and the USSR, I think Paul VI was desperate to transform the appearance of the Church from European elitism to global acceptability, before it was too late. He seemed at once to lament the death of what was left of Christendom and its liturgical culture, and at the same time to put his hope in a new culture enriched by the missionary contributions of newly converted peoples.

Although they are often contrasted with him, I think JPII and BXVI shared his vision.

JBS, I'd be interested if you would recommend sources that discuss that perspective of Blessed Paul VI.

This looks to me like a papal Low Mass where the pope is assisted by two bishops and four papal MCs, with two chamberlains (cubicularii) acting as torchbearers - you can see them to the right of the picture. Six (not seven) candles would be lit, and there would have been a bugia. The pope does not wear the pontifical dalmatic and tunicle, nor the pallium.

There are photographs and a video clip of Pius XII celebrating such a Mass in St Peter's. 7 March 1965 was the first day of the 'interim Missal' which allowed extensive use of the vernacular (some countries, including England, jumped the gun and introduced it the previous year). The 'silent' prayers, including the Canon, were still in Latin.

Note the makeshift 'altar' (actually a common table). Inter Oecumenici had recommended versus populum and until sanctuaries were 'reordered' this was common practice. The 'ambo' is a simple lectern.

If there was any singing, it would have consisted of vernacular hymns, allowed at Low Mass even before the Council.

Read his encyclicals, letters and various audiences. They paint a picture.