Catholics who do this during Mass should stay home! Good riddance! 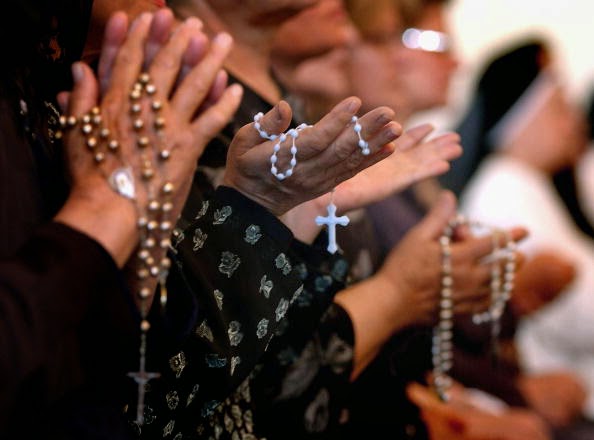 If you talk to any liturgical progressive they will tell you that the implementation of the 1970 Roman Missal in parishes throughout the world was a great success. And maybe for the 12 to 24 % of Catholics who still attend Mass, it is. But I think there can be a debate even about that.

Of course, we know that Pope Francis wants to go to the perepheries to bring Catholics back to the Church and make them feel a part of the Church.

Would the liturgical progressives want to go back to a Church and a normal parish Mass in the happy good old days of the 1950's and early 60's in this country where perhaps only 12% of the upwards of 90% of Catholics attending Mass actually participated as they should have been participating, that is actually praying the words of the Mass? The other upwards to 88% of Catholics attending Mass might have been daydreaming, praying the Holy Rosary, looking around in the Church or contemplating other holy things while the priest, altar boys and choir did their thing.

Is it best that those who would want to do some other pious or impious thing during Mass should not be attending and a smaller but purer liturgical congregation be in place?

Liturgical elitists are quite content to have only 12 % of Catholics coming to Mass if and only if they are into active participation of the Mass. If someone wants to pray the Holy Rosary during Mass, they will be marginalized and forced to leave!
Posted by Fr. Allan J. McDonald at Friday, March 06, 2015

Even before the reforms of Vatican II, the Church rightly promoted the vocal participation of the laity in the responses of the Mass, and encouraged the use of hand-missals over rosaries. However, the Mass is Christ's offering of forgiven Christians, through Calvary, to the Father, an offering not dependent upon precise liturgical participation of the laity, and in no way hindered by their pious meditation upon the mysteries of our salvation.

"Would the liturgical progressives want to go back to a Church and a normal parish Mass in the happy good old days of the 1950's and early 60's in this country where perhaps only 12% of the upwards of 90% of Catholics attending Mass actually participated as they should have been participating, that is actually praying the words of the Mass?"

Whereas it appears to me that at a typical Sunday or holy day OF Mass today, a much smaller percentage(than then) actually participate by prayerfully following the Mass. Certainly in comparison with an EF Mass today, where most follow carefully in their hand missal or the ubiquitous red missalettes and propers inserts.

JBS, I get wonderful inspiration from watching John Michael Talbot and Fulton Sheen videos. Do you think it would be OK if I used my ear buds and watched on my smartphone during Mass?

I am not aware of any legitimate precedent permitting what you describe.

Would the liturgical progressives want to go back to a Church and a normal parish Mass in the happy good old days of the 1950's and early 60's in this country where perhaps only 12% of the upwards of 90% of "Catholics attending Mass actually participated as they should have been participating, that is actually praying the words of the Mass? The other upwards to 88% of Catholics attending Mass might have been daydreaming, praying the Holy Rosary, looking around in the Church or contemplating other holy things while the priest, altar boys and choir did their thing."

You get the prize for the most unsubstantiated and incorrect post of this Month. Aren't you a prest? How dare you make these sort of inflammatory guesses on attendance and active prayer life of those attending. Shame on you.

It is common for professors of liturgy to give just the sort of descriptions that Father MacDonald cites. Any priest would be familiar with these expert descriptions. There is also plenty of anecdotal evidence for this, with which any priest would be familiar. Perhaps the information is wrong, as I suspect it is, but perhaps you could cite a reliable source or two providing a different picture, rather than shaming Father MacDonald, who sincerely works to be a good shepherd.

He loves to throw "bombshells" around, but they are usually little more than inconsequential firecrackers. No, he'll throw out some numbers just to make his post seem credible.

Just take it for what it is - another person talking through his hat. A clanging gong...a clashing cymbal...

Mixed metaphors and an abhorant lack of a sense of humor and appreciation of the truth?

The precedent is not the point. There was no precedent for saying the Rosary in church...until somebody did it.

I say the rosary at low Mass in both forms. I have asked priests about this practice. They have said that it is not the optimal form of participation but it is permitted. I find that saying the rosary actually helps me focus better on the Mass because it helps filter out extraneous thoughts.

The liturgical revolutionaries were very unwise to chastise those who say the rosary at Mass. It is quite wise to let the Blessed Mother guide us to the Sacrifice, as she was present for the Cross.

I am fluent in church Latin (I can read the altar missal). I do not pray the rosary at the EF because I do not understand what the priest prays at the EF.

You're right, precedent is not the point. Legitimate precedent is the point. Private meditation upon the mysteries of salvation by means of the Rosary during Mass was expressly permitted, but not encouraged, by the Holy See, thereby making the practice legitimate.

But since it is better to participate fully in the rites of Mass, you should get your "inspiration" at another time. I suggest you speak with your pastor if you still can't understand this.

I always thought that lady was probably attending her second or third Mass of the morning, hence her lack of attention to what was going on at the altar. Some people in those days (and I see some even today) spend all Sunday morning in Church. Believe it or not.

Participation? In the parishes around where I live it seems there are only a few voices actually responding to the priest or saying the people's part aloud. It sure is quiet in there when I can only hear myself and the priest saying, "I confess to Almighty God, and to you, my brothers and sisters..." It seems to me, around where I live, people are not exactly coming early and then leaving a few minutes after the last note of the last song has faded. More like rushing in after the Mass has started, and leaving as soon as the priest heads down the aisle.

The new Mass a success? The only ones who seem eager to participate are some (now) elderly nuns in street clothes identifiable only by a cross (not crucifix) around their necks who crowd the priest (at least in my estimation) at the altar.

The new Mass a a success? Yep, if your intent was to drive people away and keep them from God, yep, I'd say it was.

Father, my previous comment, a week or two back, about old Italian ladies praying the Rosary throughout Mass back in the day at my old home church was in response to your post about the purported loss of a "sense of wonder" in the current Mass.

While I believe everybody has the right to pray the Rosary, or not, then and now, doing so hardly illustrates a "sense of wonder."

More like distance and lack of engagement. It suggests that people felt Mass was something to be sat through and endured, so you might as well put the time to some better use.

More generally, I feel Mass conservatives here present a rosy picture of the church, pre-Vatican II, which of course the current church could never live up to.

I've expressed curiosity before about the Mass statistics you cite. Back in the day, I remember Masses that were packed at the peak times and mostly empty at others, much like now. I doubt that the church officially keeps track of attendance on its own, so we are left with citing polls -- different polls taken by different organizations at different times and different places using different methodologies. In other words, unreliable poll results that we can cherry pick when they suit our purpose.

Nice to know that I'm now among the "liturgical elitists," though.