WELL I WAS IN THE PARADE BUT IN A CONVERTABLE WITH ITS TOP UP, RAINY DAY IN GEORGIA

No photos of the parade, but pre-parade photos:

From right to left, (I'm very leftist and ultra liberal) Fr. Godfred, Kaitland Heck (our chauffeur, and CBS affiliate news anchor/reporter) and me. 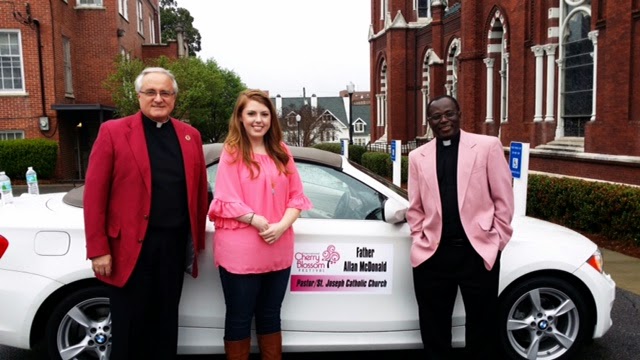 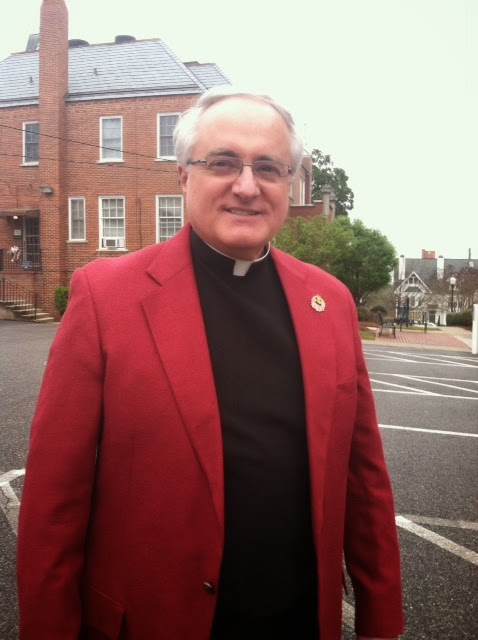 And what does a pastor do while in the backseat of a small, with a very small back seat, BMW and his emergency phone goes off and it is about a parishioner who is in the midst of having a heart attack and is en route to the hospital's ER via ambulance and his wife is your school's kindergarten teacher? You call former PI to the rescue to offer pastoral care until you can get there after the parade! BTW, the victim after a stint was placed in an artery was doing well and smiling!
Posted by Fr. Allan J. McDonald at Monday, March 23, 2015

This is an awesome story of irony worthy or O Henry. Archbishop Sample would be pleased.

Not really surprising....the rich righties in their pink blazers off parading in their BMWs....leaving it up to the loyal lefties to hold it all together...look after the flock...

I don't know the man with the emergency personally, but thank you, Fr. Kavanaugh, for being there for him.

Are you trying to make me look bad anon? I had a chauffeur too! You didn't mention that!

If you look bad, it's not because of anything I did.

Wealth and parading it around, is not exclusive to the "righties" or the "lefties". Both sides can be swollen with the Cardinal Sins of Gluttony, Envy and Pride. A swollen parade will not fit through the eye of a needle.

Loyalty is not an indicator of Truth. Who or what are the "loyal lefties" loyal to and what do they think they hold together?

Fr Kavanaugh, functioning in his priestly role, trumps his liberalism or whatever other faults he may have. I'm presuming he hasn't done anything to give scandal. So maybe he could have been a liberal scientist, but he would not have done as much good as in his current vocation.

I should have phrased that "scientist and a liberal". I've always gotten along with the liberals I have known on a human relationship level at least. I don't agree with a lot of their views but I agree to disagree with them and there are times I do agree with them on certain things.