BURNING IN HELL? IS IT POSSIBLE? 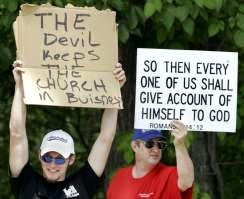 Recently a commentary in the Macon Telegraph questioned priests/ministers who preach hell and and scare small children to death. Its premise is that there really isn't any hell. I suspect the person who wrote the commentary is a practicing agnostic. He is an ex-priest and non-practicing Catholic but loves pontificating on all things Catholic about that which he likes (from the 1960's) or dislikes from almost every other period including our own time. But that is besides the point. His commentary provoked this letter to the editor:

[A] recent column entitled “The little ledge in hell” in which he chastised ministers who preach eternal fire and brimstone for nonbelievers. I well remember as a young boy many long-winded sermons in the Baptist Church, especially during revival when each message got hotter and hotter as the week progressed. By closing night the church pews were sizzling like a hot cooking stove for those “lost in sin,” and many waded into the baptismal pool to escape the heat of a misguided Elmer Gantry.

Indeed such preaching scars young children and that should be grounds for child abuse charges. Anyone subscribing to the belief that our God of the universe is so narcissistic he would condemn one of his own to an eternal pit of fire for any reason whatsoever should use his tithing dollars to buy psychiatric help.

Is there a hell? The upper-middle class person who wrote the letter to the editor doesn't seem to think so. It is said too, that Pope Francis told an atheist that hell is annihilation, the complete death of the soul. In my way of thinking this thought is nicer than burning in hell for eternity, knowing what you are missing because of your full consent of the will choices throughout life to live as though God does not exist or it doesn't matter how one lives one's life because nothing matters after death.There is either nothingness or bliss.  Some see Pope Francis' point of view, if it is what he actually said to the atheist, as heretical. I see it as merciful but maybe not the full truth.

But let's talk about the hell of this life. God doesn't prevent it either. Think of the 150 souls on the passenger jet from Germany who were murdered by their co-pilot and the horror they knew for a couple of minutes as the jet inched toward the alps in plain view!

Think about the hell of drug addicts and others doomed to a life on the streets.

Think about those who are murdered in the most heinous ways.

Think about the life long sufferings of people with chronic diseases and poverty.

Think about those sentenced to life in prison or living on death row.

God doesn't prevent any of these types of earthly hells.

We have three options. Atheism in the face of suffering and hell on earth that is completely hopeless about this life and the next.

Agnosticism that admits one really doesn't know and doesn't have any answers nor any hope either especially about the afterlife.

Or the Christian who hopes for a better world through God's grace and believes that the God created us with free will and the grace to choose God over Satan, to chose life over death and to find hope and meaning through suffering and death.

Well, at the Last Supper, Jesus said about Judas, "Woe to the one who betrays the Son of Man. It would be better had he never been born." So what is worse than being annihilated? Eternal punishment.

Watch "death & the journey into Hell" on you tube.This documentary changed my life,Literally! It's a Catholic documentary about Hell!!!