My Comment first: I can only say WOW AND GLORY HALLELUJAH (but of course I can't because it is Lent!) 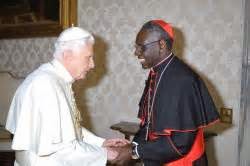 - THE POINT OF VIEW OF THE CARDINAL SARAH ON THE Motu Proprio SUMMORUM PONTIFICUM written in French here. Below is a quick translation using a translation app!

I personally welcomed it.  However we must realize this with confidence, joy and thanksgiving. It is as the sign and the evidence that the Church, Mater and Magister, remains attentive to all his children, taking into account their sensibilities. Benedict XVI wanted to promote the richness of the various spiritual expressions, provided that they lead to a real and genuine ecclesial communion and a radiation more bright of the holiness of the Church.

I think this beautiful motu proprio is located in the right line of the willingness of the Council Fathers. As well, we must not pretend to forget that Sacrosanctum Concilium stated: "The liturgy contains an immutable part, that which is of divine institution, and of the parties subject to change which may vary over the ages or even the must - if it is introduced elements which correspond poorly to the intimate nature of the liturgy itself, or if these parties became increasingly inadequate. "

In the letter which accompanied (SP) however we must realize this, Benedict XVI wrote: "Moreover, the two forms of use of the Roman rite can enrich each other: in the old missal will be and will need to be inserted the new saints, and some of the new prefaces. In the celebration of Mass according to the Missal of Paul VI may be manifested in stronger terms that it has often been done up to now this sacredness which attracted many people to the old rite. The best guarantee for that the Missal of Paul VI can unite the parish communities and to be loved is to celebrate with a lot of reverence and in compliance with the requirements; it is this which makes visible the spiritual richness and depth of theological this missal. "

It is likely that in the celebration of Mass according to the old missal, we understand more that the Mass is an act of Christ and not men. Similarly, his mysterious character and mystagogy is noticeable and more immediate. Even if we participate actively in the Mass, this at last is not our action but that of Christ. In his Apostolic Letter Vicesimus Quintus Annus, John Paul II wrote: "What is this active participation? What should we do? Unfortunately, this expression has very often been under-heard and reduced to its external meaning, in other words to the need of a common act, as if it were to make enter concretely in action the largest number of people as possible, as quickly as possible. The word participation refers to a central action, in which all must participate. So if it wants to discover of what action it is, it must be before any clarify what is this actio central, which must take part all the members of the community ... The term actio, reported to the liturgy, we returns to the sources of the eucharistic canon. The true liturgical action, it is the oratio. This oratio-eucharistic prayer solemn, the canon, is much more than a speech, it is an actio in the highest sense of the term. In effect, it is in that occurs the human action that happened in the second plan and leaves room for the actio divine, to the action of God. "

The motu proprio  we must realize this is trying to reconcile the two forms of the Roman rite and it seeks especially to help us rediscover the sacredness of the holy Mass as actio Dei, and not for men. We touch here an extremely important point: the problem of the widespread indiscipline, lack of respect and fidelity to the rite, which can also affect the validity of the sacraments.
Posted by Fr. Allan J. McDonald at Friday, March 06, 2015

Hmm . . . Do the pope and the prefect for divine worship need to have a serious sit-down?

Considering that, for better or worse, Pope Francis isn't Pope Benedict as regards liturgy, I'll take whatever we can get as far as encouraging statements from Rome are concerned. And if it comes from the head of the CDW, all the better!

And meanwhile, let us all remember to pray for the improvement of the liturgy. I can't speak for everyone, but I know that in my case, I often end up discussing things more than I do praying for them, which helps no one in the end. Give it to God, through His Mother, as frequently as possible, and remain hopeful.