A HOUSE DIVIDED AGAINST ITSELF

I saw this at Fr. Z's blog and Archbishop Samples of Portland, Oregon gives a great lenten homily on division and the devil. But it also says something to us Catholics about the divisions that abound in the Church. There will be those on the left that will mock the liturgy in which this homily/sermon is given and the vestments of all involved and the tip of the "hat" at the Most Holy Name of Jesus.

But would the liberal left mock the even more elaborate, symbolic and sumptuous Eastern Orthodox Divine Liturgy that looks so similar to what is seen in the video above? 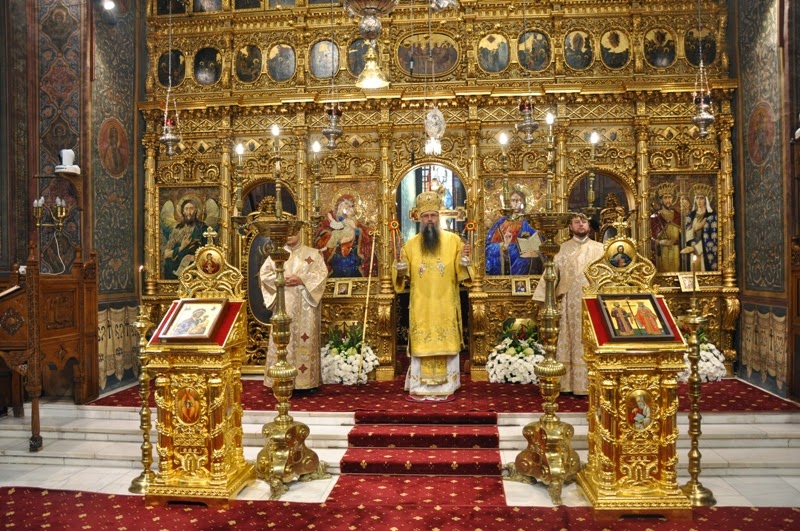 The two divisions in the liturgical world of the Latin Rite argue past each other. The Latin Rite symbolized in the video above wants the reverence as stylized as it is, of the Extraordinary Form. This group sees reverence, mystery, awe to be  the most important influence in the ordinary lives of Catholics, clergy or laity. This form of the Mass makes the Church, the Mystical Body of Christ.

Those who prefer a more banal liturgy, see reverence as secondary and even a distraction to the horizontal sociological function of the Mass in the sense of involving a clique of laity in liturgical roles once the domain of the ordained or those on the way to Holy Orders.

The vertical encounter of God is secondary and even considered bad as it is seen as a privatized piety, something to be avoided at all costs despite the outward appearance of reverence! In their thought a "new" theology (not doctrine) of ecclesiology is the most important and the shifting of roles from the clergy or would-be clergy or faux clergy to the laity as essential and having implications for the life of the laity as a priestly people in the world. This ecclesiology taken to its logical conclusion envisions or "re-imagines" the laity even presiding at Mass, chosen from the congregation to celebrate a meal. Sacrifice is seen as too Old Testament as well as the ordained priesthood.

Where do I stand? I think Catholics need reverence, awe and mystery to recover their Catholic identity. They don't need the liturgy in which the primary and all important aspect is to symbolize ecclesiology and their role in a social structure. They need to encounter the Head of the Mystical Body of Christ, Jesus Himself and to be transformed by the Holiness of God in this encounter. It is about God making us Holy by our presence at Mass in which He Himself has summoned us and we have freely responded which includes also our actual internal and external embrace of His grace.

Listen to the whole homily of Archbishop Sample and toward the end his call for the "reform of the reform" built upon charity, joy and cheerfulness in Christ.
Posted by Fr. Allan J. McDonald at Saturday, March 21, 2015

Yes, indeed, Father. The big question about liturgy: Is it about me-us, or is it about Him? Who is the focus: I am, or the great "I AM"...

I don't know that liberals "mock" the old liturgy so much as mock the obsession with it. I'm not aware of liberals arguing that the old-form Latin Mass is invalid or responsible for all the ills of the world or that supporters of the old-form Mass are systematically undermining the church. If there is any war over the Mass, it is fought largely one way, by conservatives who can't accept the modern day, have no apparent love for their fellow Catholics and drag every church discussion back to the same topic. As we so often see here.

Daniel, I've lived a long time...much longer than you, I suspect. There is no war, only observations and angst here about what has transpired over the decades since 1965. I was a high school senior that year--that year was sacrosanct to me. I was so committed to Holy Mother Church, even trying to discern a religious vocation. We have lived through changes in the church I could not have imagined then.
We have tried over these ensuing years to guide our children through a church that we no longer recognized but remained committed to. One, our son, fell away in college in 2002 during the holocaust of the revelations of the homosexual priest abuse revelations. He was employed the previous summer by our local parish in a renovation project and we were so happy for him. The priest there recommended he see the movie "Deliverance". Weird, and we were concerned. We have wondered since then if he was influenced wrongly, but never knew.
Daniel, the church is so very eclectic. Can we live in peace with each other while celebrating and glorifying our good God? I think we have no coho ice if we are to survive and change the world by our example.

It's about the environment, self-esteem and emotional stimulation.

Many of us have lived through traumatic experiences of betrayal and egregious evil at the hands of scandalous prelates, bishops, priests, DREs, etc.

Many of us have seen scandalous behavior from "people who should know better" which would never have occurred to us as possible in younger and more innocent days.

So this colors our reactions to yet more scandals. On one level perhaps we've come to expect it, to be 'braced' for scandal and betrayal at the hands of prominent Church people. But we don't like it or revel in it.

You can see it in my writing certainly and in others. It's usually progressives who nurture a sense of grievance and victimhood as it gives them power and infallibility in these days of disorientation, so it's highly unusual and unexpected to find it among conservatives. It's a role reversal and not a few progressives resent us for using their tool against them. But in our case it's genuine because we really were victims not contrived ones.

They moan and groan about being 'victims' of judgmentalism...we endure harsh judgments daily in the Media. In print, in song, in movies, in literature, in politics.... and unlike the Left, there is no vast peanut gallery out there to give us honors for being "victims" or having our feelings hurt.

Just silence and our faith that God ultimately is just as much as mercy.

Did the old Mass hurt anyone? Cause scandal to the little ones? Lead people to doubt the faith?

So far as I can tell from a lot of reading, it wasn't the Mass so much as the homilies and extra-liturgical theologizing that was the problem before Vatican II. But it was also the larger hostile society that some Catholics assumed would be 'nice' if only we became 'less weird'.

The hostile secular world won't like you more for watering down the liturgy. Or morals. Or doctrine.

The secular world wants total submission (as does Islam) and won't accept equal status of non-believers in their gods. They both will tolerate (for a while) second class citizens in ever smaller ghettos and reservations. But nothing that challenges their truth claims frontally as our Creed does.

We tend to grasp this intuitively while 'liberal' Catholics still think their secular friends are allies and anything tradition is embarrassing at best or somehow victimizing at worse. It's all poppycock. But we're supposed to treat fools as wise men and bite our tongues out of 'charity' while for lack of wisdom not just we but the ruins of the West totter and crumble before black flags.

"I'm not aware of liberals arguing that the old-form Latin Mass is invalid or responsible for all the ills of the world or that supporters of the old-form Mass are systematically undermining the church."

The older form of Mass sustained for well over a thousand years the faith of successive generations of Catholics.

When it was replaced by the newer form, a substantial fraction of religious, clerical, and laymen left the faith within a single generation.

Even if this loss cannot be attributed solely to the new Mass, the historical coincidence is enough to raise the question. Even Cardinal Ratzinger, who celebrated the new Mass with utmost fidelity and devotion, believed that "the crisis in the Church is largely due to the disintegration of the liturbgy".

Using words like "left" and "right", "orthodox", "liberal", these words are dividing us as well.