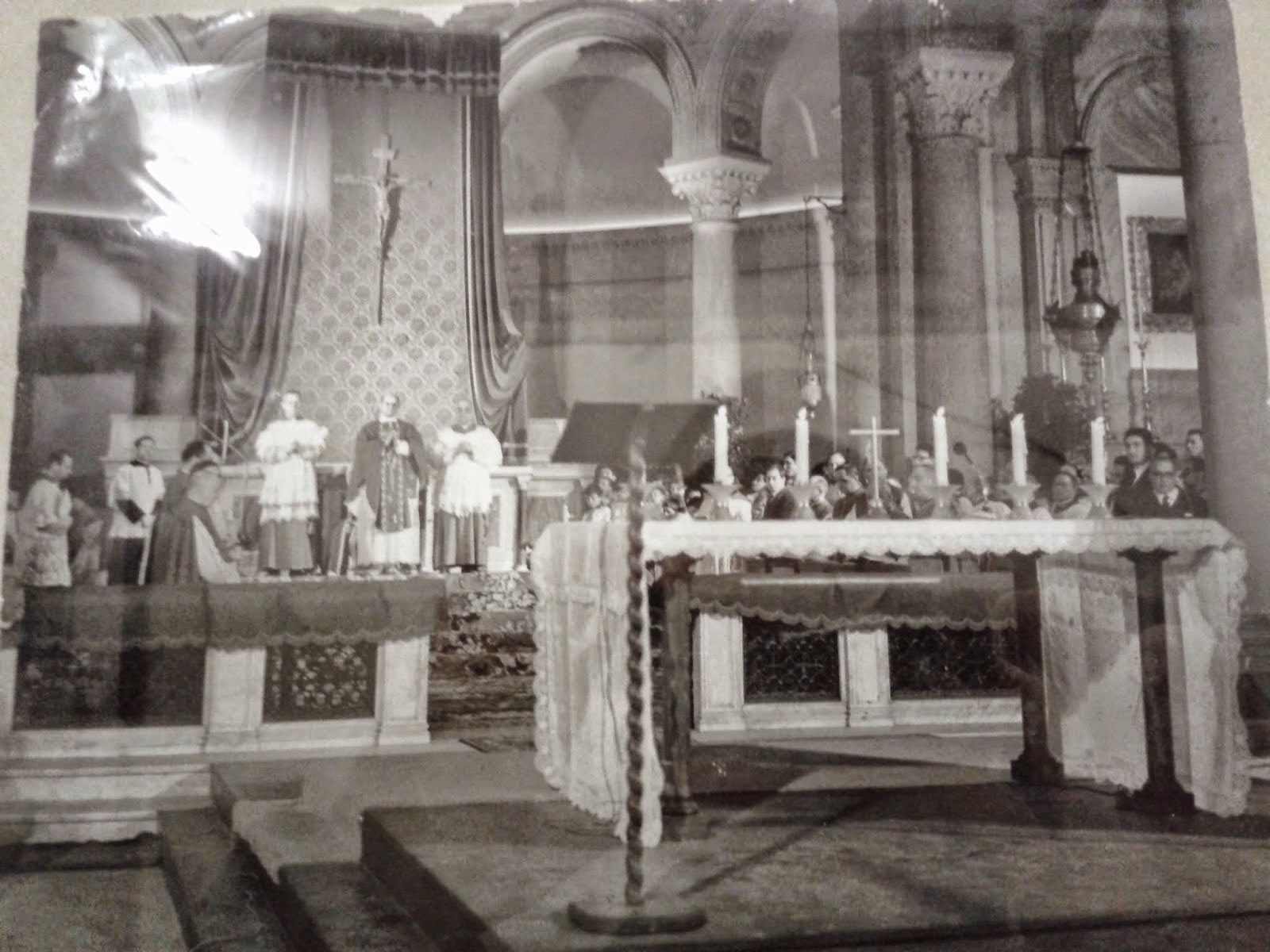 If there was ever a picture of iconoclasm this is it. The idea that the Mass had to be as close to the people as possible, not only in language but also where the altar is placed, it is captured here and by Blessed Pope Paul VI.

Please note that the old high altar behind where the pope is standing is stripped and this new altar is placed in the nave on a platform and looks more like a table, a meal.

This very same church today has a more traditional look although greatly renovated, but still beautiful if you watch the video of the Mass with Pope Francis some 50 years later.
Posted by Fr. Allan J. McDonald at Saturday, March 07, 2015

Pope Paul VI,like so many in Europe including Cardinal Ratzinger and the Fathers of the Council, was very influenced by the post war mentality that this was a new modern world very different from the past. There was so much optimism that the Church would meet this modern world by changing, and flourish like never before.
Paul VI welcomed changes to the liturgy to accommodate this new world. Of course, like Pius XII before him, he knew little about liturgy and left it to the experts, in particular under the direction of that great and renowned scholar so in tune with the modern world and expert in all matters liturgical, Msgr Bugnini.
What Paul VI was doing at this first Mass was precisely what he was advised to do by his entourage from the Consilium.
About 10 years later he regretted what had been done to the liturgy, and even exiled that champion of post war liturgics. But it was too late to do anything.
Please do not misunderstand me. These figures were sincere even in their agendas. The problem is that their agendas were exclusive to the times. The New Mass was a liturgy for the times not a liturgy for all time. By implication, the New Mass is very outdated, and no longer speaks to present world which has changed.

I think it is important for everyone to realize that priests and religious my age and older, much older, fought many battles to implement what Blessed Pope Paul VI modeled in this first Mass and which was accelerated with the 1970 missal and the spirit of Vatican II.

Yes it is outdated and well-meaning, but it missed the mark on many levels. However, I think the Vatican Liturgies today are much better and what Pope Francis celebrated today in the very same Church is adequate. Pope Benedict though had the key and I think his great teachings on the liturgy will eventually win the day!

Beginning with the Roman Missal of the Council of Trent, the model provided by the local cathedral or the Roman basilicas gave way to the model described in the rubrics of the printed missal. However, we may now be moving into an age in which rubrics and episcopal/papal example will become a sort of balancing guide to parochial celebration.

There was tremendous determination then and today among many within the Church to move the altar closer to the people.

Therefore, what is the point to outdoor Papal mega-Masses during which people hundreds of thousands of people are literally thousands of feet from the altar?

Given that the table is forward of the altar rail, how was Communion distributed? Standing for Communion had not reached Rome in 1965, although practised illicitly in Germany and a few other places.

Where the altar has artistic significance (as in the baroque churches of Germany and Austria) it remains in place but there is a forward altar (Volksaltar) which at a future date can (and one hopes will) be removed.

Westminster Cathedral got rid if the forward altar just a few years ago; the High Altar was always free-standing under its magnificent baldacchino, but there wasn't much room behind it, and for structural reasons it couldn't be moved. So they simply enlarged the space behind it by a couple of feet.

The reason why it wasn't done years before was that liturgical progressives wanted the entire sanctuary and choir remodelled 'for the new liturgy' which would have wrecked Bentley's artistic concept. The argument went back and forth, but fortunately sanity prevailed over 'spirit of V2' dogmatism.

In my former parish in Augusta, the table part of the altar which was attached to the reredos was seperated and brought slightly forward in the late 1960's. They didn't do a very good job of it as the table part of the altar rested on the edge of the top step thus not allowing one to approach it from the front or celebrate ad orientem. I reordered that in the late 90's by simply pushing the reredos backwards (a lot of unusable space behind in in the apse and lowering the altar from four steps to three and pushing the table part back to its original position thus allowing ample room in front of it.

I wanted to do this here in Macon, but the altar/reredos design was much different and seperating the altar from the reredos would do great harm to the reredos. So a new free standing altar was designed and placed in front of the old but in a way that from the congregation makes the two look like a single unit.

I believe St. Patrick's Cathedral in New York has gotten rid of its faux altar in front of the main altar under the baldachin and will not use it.

Your free-standing altar (judging from photographs) is of noble design, in keeping with its surroundings, can be used for celebrations in both orientations and indeed for concelebration where appropriate. What's not to like?

The altars were parted and many departed. blessed be those who stayed, and the will of God obeyed.

"The altars were parted and many departed. blessed be those who stayed, and the will of God obeyed."

George, that was genuinely brilliant.

Reflecting on the voting rights marches of 1965, it seems to me all the more urgent that we restore the direction of liturgical prayer and the dignity of the altar. The present arrangement and design easily comes to signify a group of people closed in on ourselves and going nowhere. But the traditional arrangement reveals us marching together, in solidarity with the poor and oppressed, towards Heaven, which is signified by "otherworldly" altars.

The last thing our suburban, racially exclusive parishes needed in the Sixties and Seventies was circular, self-contained liturgy.

By the end of the Middle Ages there were a number of different Rites and Uses in the Western Church. In the thirteenth century the Dominicans established their own rite because otherwise they would have had to keep adapting to a myriad of local customs. And yes, this rite was drawn up by a committee, and although subject to some changes over the centuries, is still used today.

What is striking about these different Rites and Uses is not so much their differences as their similarities. This is not because popes and Councils mandated liturgical practice (they didn't) but because of a general tendency for localities to want to conform with Roman practice, and for Rome to adopt elements of other liturgies, the Gallican being the obvious example.

In the sixteenth century we see an move to impose a greater liturgical uniformity as a result of the protestants devising their own (heretical) 'liturgies' and the availability of printed books. But Pius V allowed the continuation of all Rites and Uses with a pedigree of a mere 200 years.

In the centuries which followed the Holy See did occasionally intervene in liturgical matters but always in the sense of restoring traditional custom which had been compromised by unauthorised innovation.

This all changed in the 20th century. Pius X was the first meddler, interfering with the calendar and breviary, among other things. Pius XII was another; under the guise of 'restoration' the ceremonies of Holy Week were mutilated and the new Ordo was imposed on the whole Church by papal fiat. In 1963 a General Council in effect ordered the Mass to be rewritten in order to conform to what were perceived to be modern needs (nothing remotely like this had ever happened before) and within a decade a radically new order of Mass was imposed on the entire Church by papal decree, and all the other liturgical books were subjected to the same treatment.

In spite of this, you still hear 'traditionalists' calling for Rome to mandate this, that or the other with regard to liturgy. Yet even correcting abuses should really be the remit of the local Ordinary. Benedict XVI was perceptive enough to realize that you don't solve the problem by adopting the same tactics that caused the problem in the first place. This is why SP is such a ground-breaking document.

Consider what happened this morning at a country parish in Oxfordshire. The new parish priest, on his own initiative, has been offering the old Mass every Saturday and Sunday (in addition to the Novus Ordo). Today he was supported by another priest to act as deacon and a permanent deacon to act as subdeacon, an experienced MC and extra servers, a professional cantor and a seven-man schola (including myself), and we had a Solemn Mass. This is what Benedict envisaged; like-minded people getting together at grass-roots level. It won't happen on its own - if you want it, you have to make it happen.

The renaissance corruption of the Church led to the disastrous Protestant revolt and widespread cultural collapse in other Catholic lands...until the counter-reformation, Tridentine reforms, the Jesuits and others who died for the faith were able, at huge cost, restore some semblance of Catholicism.

Modernism, not 'conservatism' is to blame for the rise of the modern post-Christian world. It's not the fault of arch conservatives that most US Catholics don't go to Mass, don't know basic catechism, and don't live a moral lifestyle.

But somehow it's traditional liturgy and morals that gets blamed.

Although Roman liturgical practice generally has been formative in the development of norms and rubrics, it's my impression that--before the twentieth century's great leap forward--no one would have thought of a pope "modeling" proper celebration of liturgy. Indeed, I know of no pope since possibly Gregory the Great 1500 years ago being spoken of in such terms.

The role of the pope was that of a guardian of received tradition rather than an innovator or "model". Historically, very few popes have regarded themselves as liturgical experts or exemplars. Perhaps excessive attention to papal behavior has been one factor in the post Vatican II disintegration of liturgical practice.