HOW CAN YOU TELL IF YOUR PASTOR WAS FORMED AS A SEMINARIAN AND PRIEST IN THE 1970'S? TAKE A LOOK!

Sometimes when we look at the garish and awful decorations that are placed in the church as a sign of the various liturgical seasons, one wonders if the ones doing it (hopefully not the priest, but they may be priest trained) weren't fired from their jobs as department store window dressers.

The photos below are examples of Lenten desert scenes, a quite common silly liturgical idea from the 1970's. You know you have a pastor or priest on staff who is nostalgic for the 1970's when you see this kind of stuff!

Just a rule of thumb, when placing flowers or other decorations in the sanctuary, the idea is to frame not hide the altar, ambo and priest's chair. Never, never, ever placed stuff in front of the altar. The altar is the primary symbol/sign of the Church! Don't hide it with stuff! 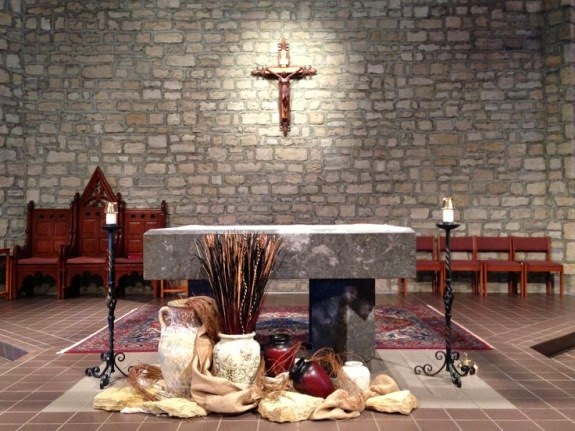 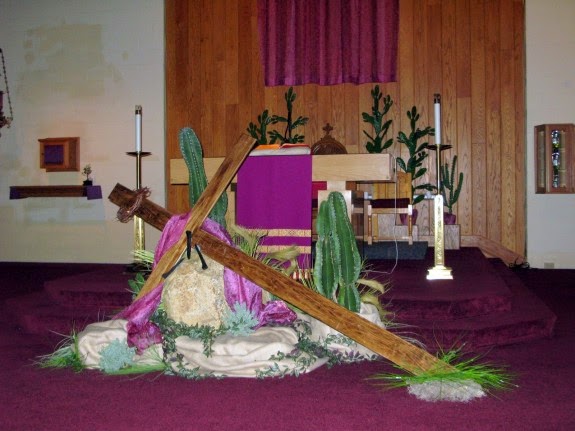 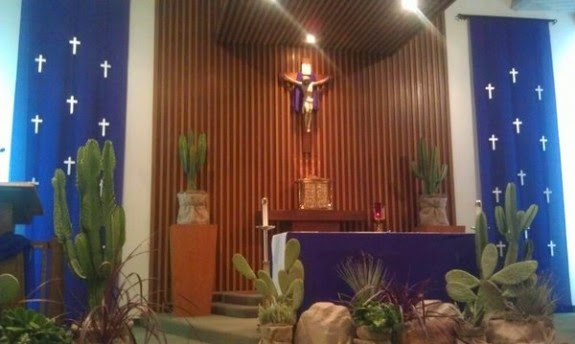 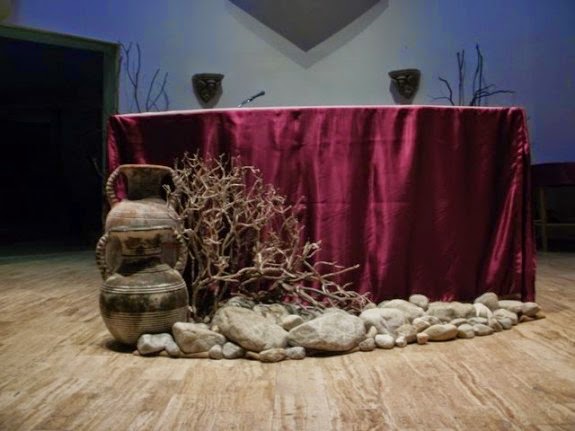 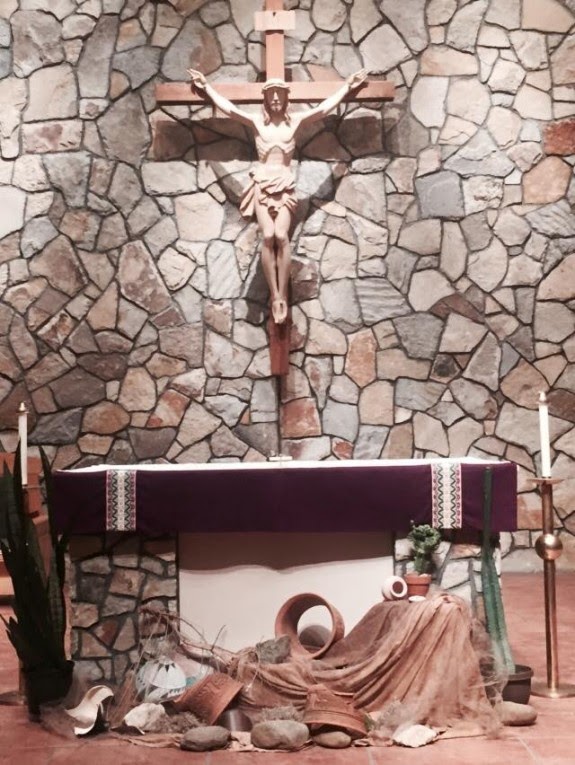 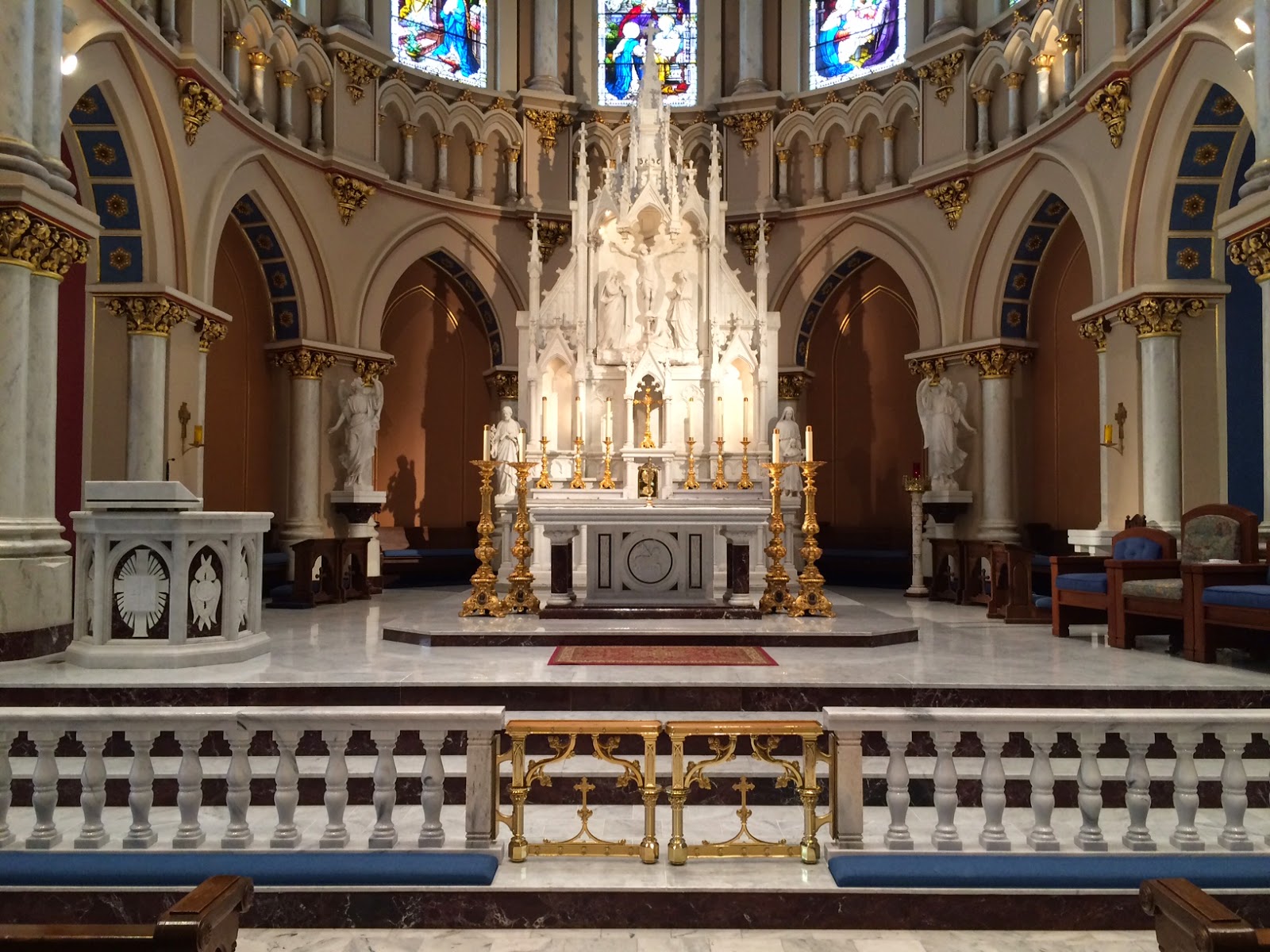 Father, what a contrast. Looking at those photos I couldn't help but think that the rustic 70's look tends to drag us earthwards to dwell on our worldly cares. Whereas the beauty of St Joseph's immediately raises the mind and heart to God and we can picture Him in all His heavenly glory. Simply beautiful. From those photos we can see how much we have lost but also what we can regain through prayer of course.

I'm thinking of proposing an air compressor to blow tumbleweed across the sanctuary at regular intervals.

That last church looks like they blew all of their money on the rail and couldn't finish top of the gates. (J/K!).

I suppose it is a matter of taste. Many of those scenes are depicted in traditional art and stained glass in older churches. Maybe they were torn out and the people instinctively want them back.

We spent a couple of hours building and decorating a St Joseph table in the parish hall last night. Apparently an Italian tradition, there was a stunning array of St Joseph art placed out. We will finish it Sunday with breads and fish and a party. I will be anxious to see if we leave the fish and bread out long enough for the hall to smell like Italy!

We just couldn't afford all that desert scene stuff and expensive broken pottery because of all the money installing the altar railing and gates. Our priorities are mixed up!

Perhaps if he thinks that a pope's individual violation of a liturgical law or rubric changes or abrogates the law, so that it no longer applies to others. That is, he's under the mistaken impression that the pope's prudential decision to ignore the law on a particular occasion, authorizes an individual priest to violate it similarly on his own initiative.

My pastor recently went on a rant in his homily saying, with disgust in his voice, that "coming to mass every week just to get your ticket stamped" is not what the Church is about. It's about caring for the poor and homeless. Ultimately, rituals are meaningless if social justice isn't the primary reason for the communial gathering.

I wonder if your well-meaning pastor helps the poor just to get his ticket stamped?

I used to decorate an altar that our TLM shares with an English Novus Ordo Mass and I always had to move the plants and flower vases in front over to the side. [No choice there, as our priest has to stand where those plants are.] And I had to move them back after our Mass.

But, modesty aside, our TLM altar always looked more elegant. I would wrap the altar table down to the floor with cloth of the liturgical season's color and attach a vesica [embroidered emblem - usually a Chi-Rho or JHS]to front. Three layers of cloths were spread on top of the altar, the topmost of which is the white "fair linen" edged with lace in the patterns of crosses, wheat, and grapes.

Six tall brass candlesticks [three on each side of the crucifix] were placed in back that also held up the altar cards. Small flower arrangements between the candlesticks [when not in Advent or Lent.] The Roman Missal on a low book stand on the Epistle side.

This is from six years back but I think it stil applies:

From "Who Really Cares: The Surprising Truth About Compassionate Conservatism." Arthur C. Brooks, a professor at Syracuse University:

Residents of the most conservative states (politically speaking) gave substantially more to charity than those of the most liberal states.

The single biggest predictor of someone's altruism is religion. So the above study is not surprising given that surveys I have seen show that those who attend religious services once a week or more tend to be far more conservative to their less Faith-devoted counterparts as well as those who are unchurched.

Having a problem with Church decorations? Have a budding interior designer?

There's a ministry for that!

The professor's study results agree with my own limited personal observations--that as a whole, conservative Catholics often appear to be more serious than liberal Catholics about both liturgy and charity.

What is that? (echoes of Pilate) Is anyone quite sure? Is it a catch-all for whenever a segment of a population desires correct a perceived wronging of another segment? Perhaps it is an excuse to get whatever one desires.

What Justice would a society blissfully soaking in a cesspool desire? A larger cesspool? A more welcoming cesspool? Cesspool equality?

Yes, indeed, George and Henry, that is very much the dirty little secret that remains hidden. Just ask Fr, McDonald or even his very liberal counter-partner on this blog who the regular true tithers really are. If they are honest, the 30% (+/-) who actually tithe their 10% are ...? There are always individual big-donor exceptions of course, but I can tell you from personal experience even within my own family who gives the most to charity.
"Awe, they don't need my help...they have plenty of resources...the government will take care of them & that's why I pay taxes..." And on, and on with the lip service.

Jdj - I don't review peoples' donations, so I have no idea who the tithers in my parish are.

Somebody keeps track of something because of the year-end thanks/tax letter. Maybe it's all automated and no one sees the letter or a generated report. Or maybe the office staff looks and gossips.

In any event, God knows and, hopefully, the recipient benefits from the giving.

Do conservatives also stand in the Temple and say "God, I thank you that I am not like the rest of men....etc...."

There are almost certainly some out there. I would hope they are the exception.

I've never heard them do so. Have you?

My pastor summed it up well in a recent homily. He said that he was entirely sick of people complaining that he should replace the fine vessels at Mass with cheap pottery and give the money to the poor. He reminded everyone that Our Lord Himself said "The poor are with you always ..." and he considered that there should be the best the parish could afford for Mass.

But, he said, he would reconsider his position when a young couple pledging their love in marriage stood before him and presented their beloved with a pottery ring. He said, "Oh no, only the finest of gold and diamonds for my beloved" and yet they begrudge it to God. Where is their love for Him he questioned. How right he is ...

So the many anonymouses could do well to think about what Our Lord told the apostles when they begrudged the jar of ointment the woman poured over His head. They would do better to err on the side of the finest for God as the poor have always done ... and it would be interesting if any of them can confirm that they have given their wife or husband a pottery ring to pledge their love ...

Henry and George are not standing in a temple, but offering a defense against the unjust statement you related from you pastor. Have you ever studied traditional logic or rhetoric?

JBS....have you ever studied reading? Did I say Henry and George were standing in a temple?

They were bragging about how much better and holier they were because they are Pharisees....I mean conservatives....

I have never related a statement from my pastor...just or unjust....

Somebody may have stolen my anonymity.

It appears you've lost your marbles.

Happy St. Patrick's Day to you and all.

Thank God I am not like those Pharisaical conservative Catholics?