THE BLOOD OF MY GOOD FRIEND AND MARTYR, SAN GENARO PARTIALLY LIQUIFIES FOR POPE FRANCIS TODAY! AND I RECEIVED A PARTIAL MIRACLE FROM THIS SAINT TWO YEARS AGO!

Below these wonderful pictures of Napoli's Cathedral is my miracle story followed by the miracle that Pope Francis had today! 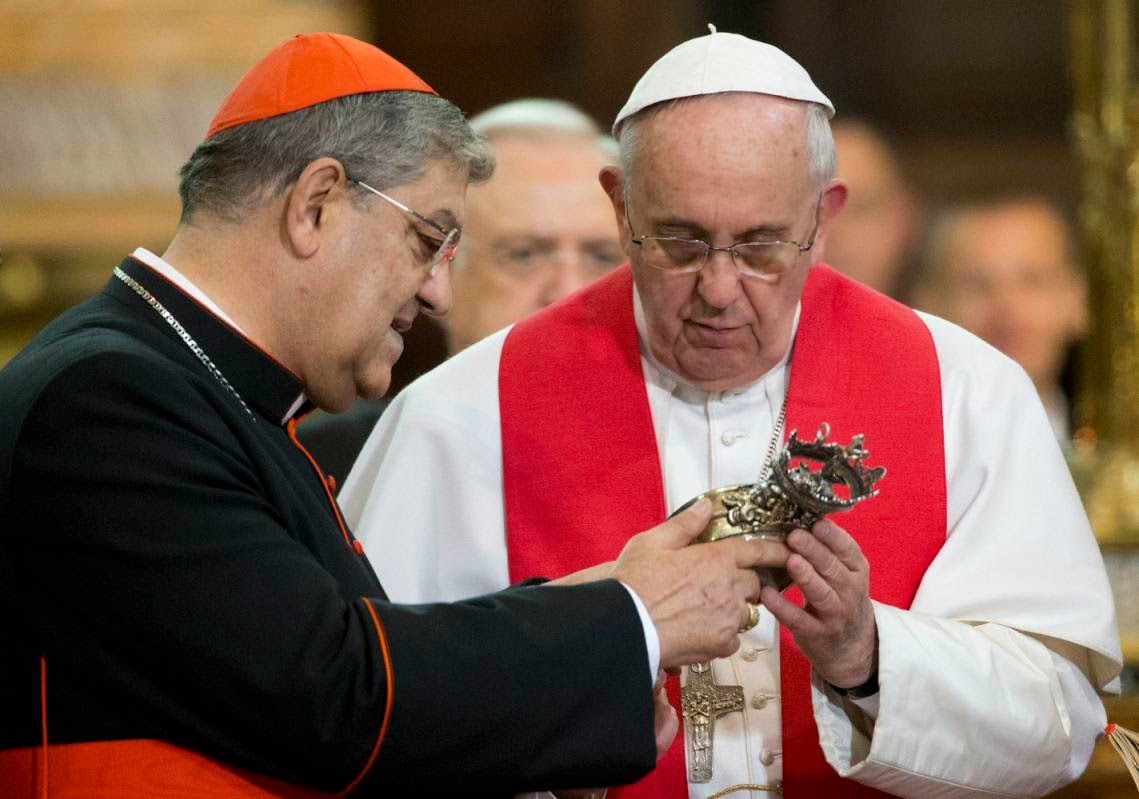 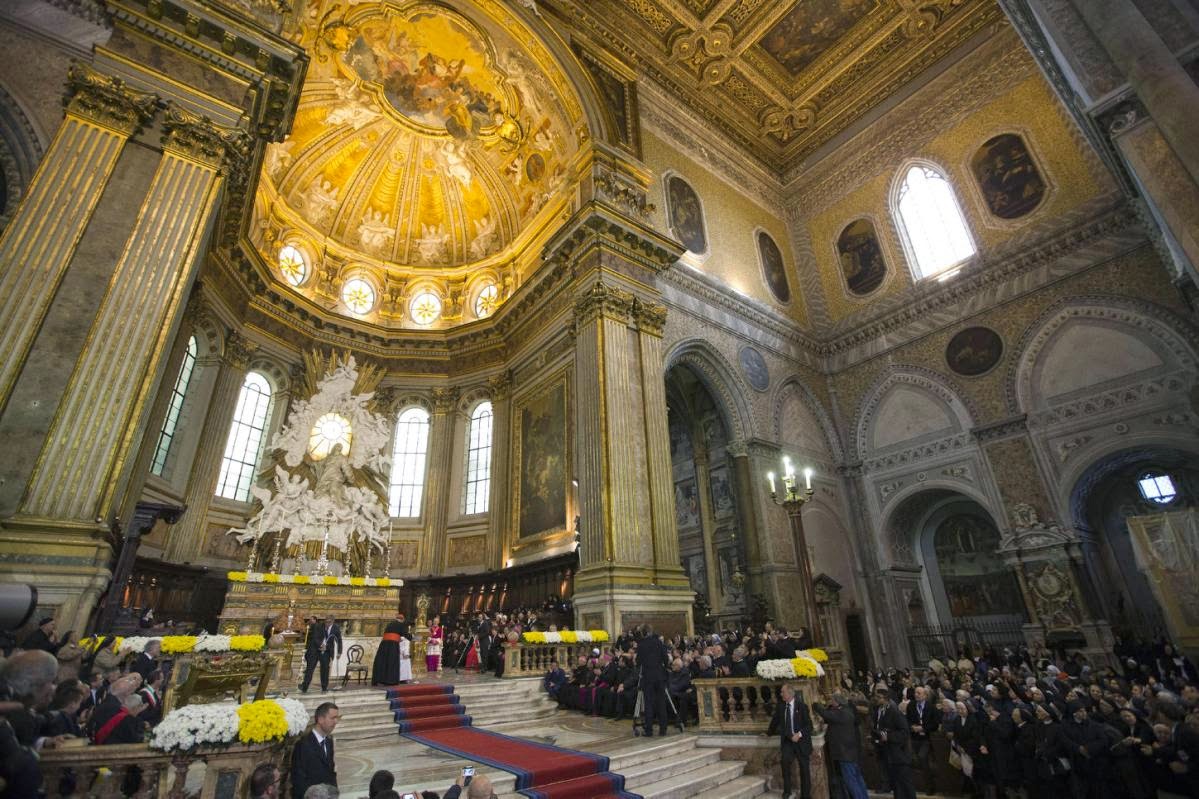 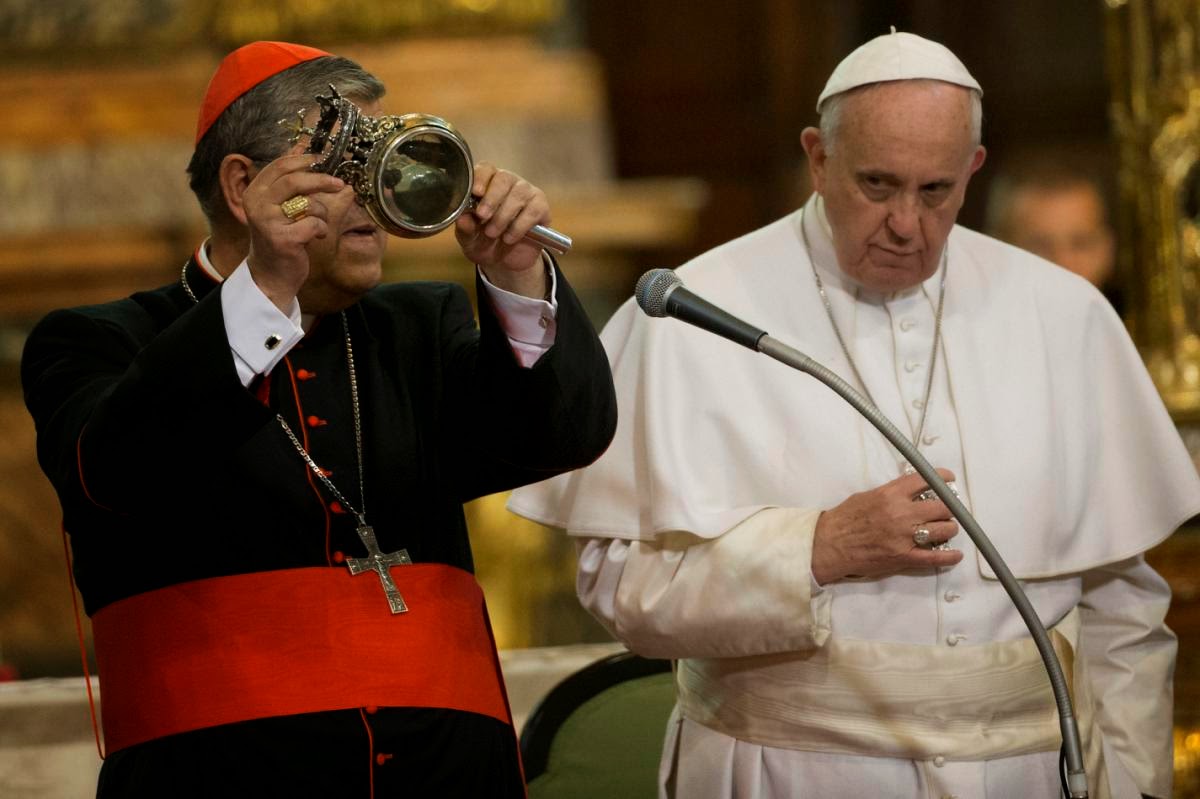 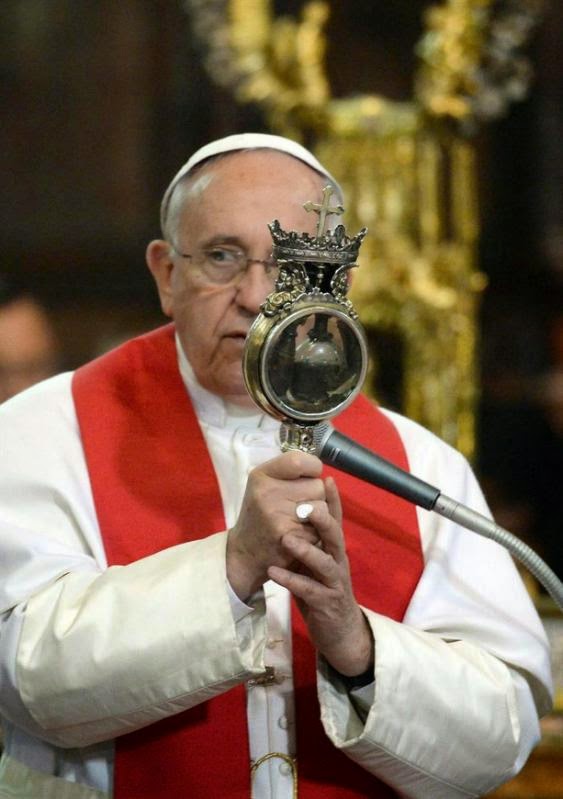 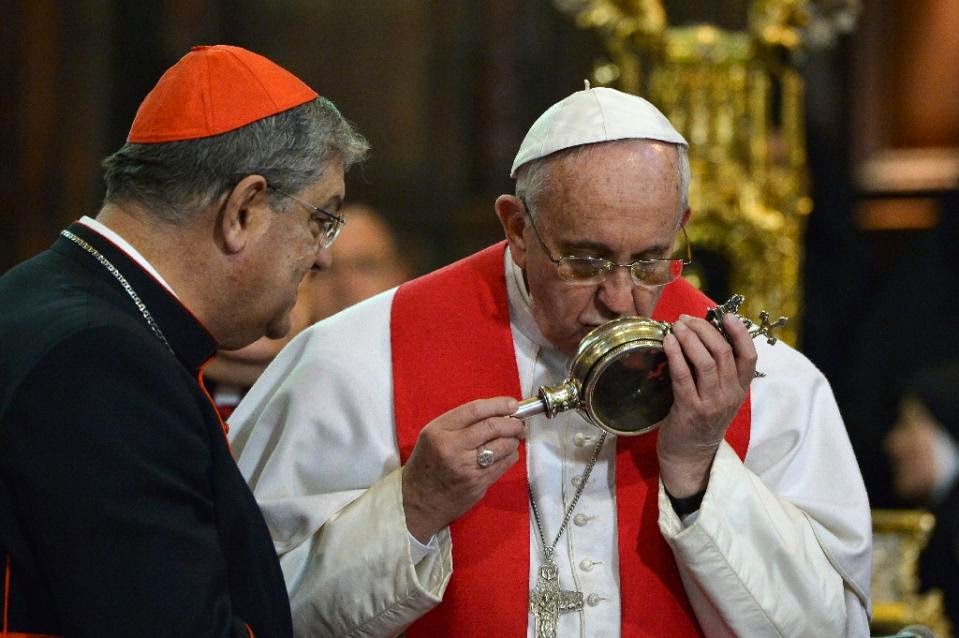 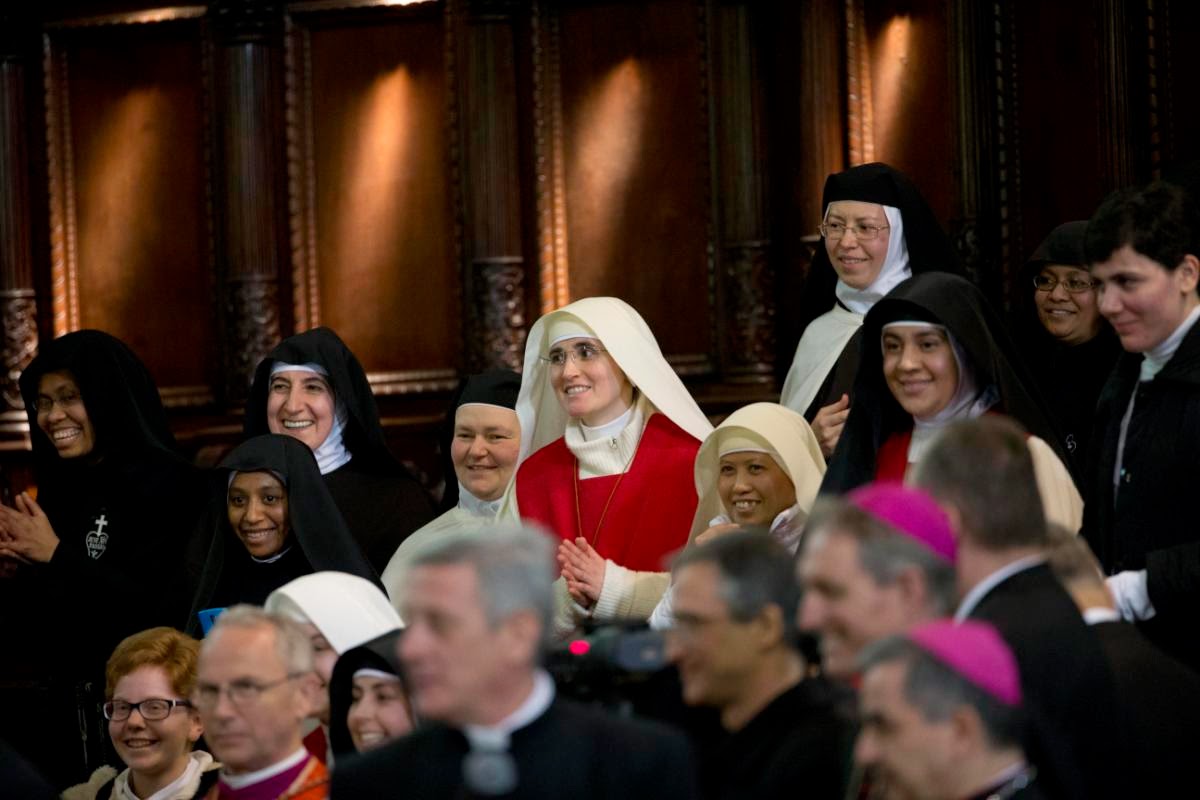 When I went on sabbatical for three months to Rome, at the very beginning of it I twisted my knee three times and tore a meniscus in it which jammed in my knee joint causing me terrible pain day and night and an inability to walk correctly, especially going down hill (going up wasn't a problem). I had to take pain relievers. But since I was on a once in a lifetime opportunity in Italy, I didn't let it slow me down. I forged ahead.

I went to Napoli one weekend in October and happened  to entered its great Cathedral. I am certain my father brought me there as a small child because I recalled aspects of it! Then as I was touring I realized I was standing at the gate to the entrance of a large chapel on the side of the Cathedral which was the chapel of Saint Januarius. I then realized I should ask him to heal my knee, but I asked it in a casual sort of way not really believing this prayer would be answered. This was Friday evening.

Then on Saturday afternoon I was on Napoli's waterfront and on level ground. As I walked I hit a protrusion hidden on the sidewalk with my right foot (the right knee being the problem) and nearly went flying onto the sidewalk face first, but caught myself before I fell. I thought to myself that I had really damaged my knee because of this as I felt a shock go up my foot and leg to my knee.

I walked a bit and discovered that the knee joint had been cleared of the meniscus that was in it, it had been dislodged by the jolt! I had not pain, my knee worked properly and I could walk normally! I kid you not. It was a partial healing as the meniscus was still torn and moving about but not in the joint anymore. It gave me about five months more before I had to have surgery to repair it.

I went back the the cathedral on Sunday hoping to attend Mass in its splendor. But my timing which now I don't think was just coincidence was for a Mass in Saint Januraius chapel and at his ad orientem altar. I was dumbfounded that I could give thanks to him and in his chapel and at an Italian Mass celebrated ad orientem! God is good! I took this picture at this Sunday Mass! 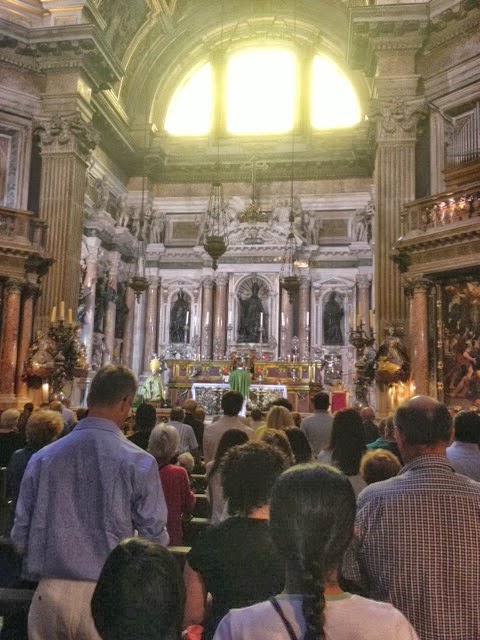 Naples (Italy) (AFP) - It was a miracle! Or maybe not. The dried blood of Naples' patron saint Januarius half-liquified Saturday during a ceremony when Pope Francis held and kissed the relic while on a visit to the southern Italian city.

Archbishop of Naples Crescenzio Sepe showed the glass vial to the congregation in the city's cathedral and declared: "The blood has half liquified, which shows that Saint Januarius loves our pope and Naples."

Francis, known for his plain speaking, quipped that he and his fellow visitors to the city's cathedral had failed to win the saint's full affection.

"The bishop just announced that the blood half-liquified. We can see the saint only half loves us."
"We must all spread the word, so that he loves us more!" he added.

Each year thousands of Roman Catholic faithful go to the three special services at Naples Cathedral where the dried blood of the fourth-century martyr is said to turn to liquid.

Some people say the blood even increases in mass during these displays, though the church does not officially recognise any of the relic's alleged transformations as a miracle.
The Roman bishop was decapitated during the persecution of Christians during the reign of the emperor Diocletian in 305 AD.

The showing of the vial is eagerly awaited because, according to tradition, whenever the blood has failed to liquify a catastrophe has occurred.

The ceremony has been going on, sometimes up to 18 times a year, for the past six centuries.
In 1527 and 1528 non-liquefaction was followed by the plague. In 1559 famine came and in 1833 cholera raged through the city. In 1944 during World War II non-liquefaction was proceeded by bombing raids by Allied aircraft.

The "half-miracle" came during Francis' one-day visit to the city in which he was greeted by hundreds of thousands of people waving Vatican flags
Posted by Fr. Allan J. McDonald at Saturday, March 21, 2015

This is the habit of the order that Faustina was asked to establish by Jesus. She writes about it in the Diary... They are mainly in Holy Land. Characteristic is the RED scapular...

Yes, my miracle to get me through my sabbatical happened in early October, returned to the USA the Tuesday before Thanksgiving and didn't have to have surgery to repair the torn meniscus until about March or April. If not for San Genaro, I would have had to leave the sabbatical early as my knee was giving me such pain and discomfort walking and there was a lot of walking on this sabbatical!