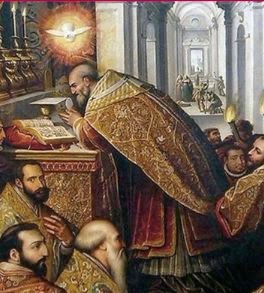 The two [points of view] most often heard are the lack of obedience to the Council which reformed the liturgical books and the rupturing of unity which must necessarily follow, if one allows other different liturgical forms to continue. It is relatively easy to refute in theory these two arguments. The Council itself did not reform the liturgical books but rather ordered their revision. To that end it laid down some fundamental rules.

Primarily the Council defined what liturgy is and this definition gives valid criteria for every liturgical celebration. If one wishes to scorn these essential rules and to put aside the normae generales which are bound at numbers 34 to 36 of the Constitution "De Sacra Liturgia", then one violates obedience to the Council! One must judge liturgical celebrations, whether they be according to the old or the new liturgical books, based on these criteria.

Firstly, one judges the two liturgical forms by their exterior elements and arrives at the conclusion that there are two fundamentally different outlooks. That the new liturgy be celebrated in the vernacular, facing the congregation and that there be great leeway for creativity and the active exercise of roles by the laity, is considered essential by the average Christian. On the other hand, it is deemed essential that the old liturgy be in Latin, the priest face the altar, that the rite be strictly controlled and that the faithful follow the Mass by praying privately without having an active role. From this view appearances and not what the liturgy itself considers important, are essential for a liturgy. One must realize that the faithful understand the liturgy from visible concrete forms and that they are spiritually impregnated by them and that the faithful do not penetrate easily the depths of the liturgy.

This is why it is so important to obey the essential criteria of the Constitution on the Liturgy, which I cited above, even if one celebrates according to the Ancient Missal. At the moment when this liturgy truly touches the faithful by its beauty and depth, then it will be alive and there will be no irreconcilable opposition with the new liturgy - provided that these criteria are truly applied as the Council wished.
Posted by Fr. Allan J. McDonald at Tuesday, March 24, 2015

The French Revolution, the fall of monarchies, the rise of atheism, Marxism and the various utopian socialist dictatorships...the rise of Masonry.... and finally the two back to back catastrophic world wars the so traumatized the European world - all occurred before Vatican II and before the Mass was tinkered with.

It's thus perhaps understandable that some voices were raised in the 1950s - seeing the en masse defection of Christian laity to these godless anti-churches - and blamed in part this exodus on the "obscure" and passé Old Mass.

It's understandable that they would associate the old Mass with "all that went wrong since Trent" to stop the Protestant and all subsequent ruptures.

Vatican II is replete with calls towards holiness, a mature attitude, a sense of propriety, orderly use of liberty etc. and a naïve sense of 'openness' as though half the world wasn't then being controlled by the USSR and allies and the other half wasn't actively being subverted by advanced forms of propaganda on behalf of anti-Catholic secular regimes and world views.

Instead, every major change was rammed through all at once before the people had a chance to react.

I suspect the future will be evangelical, charismatic, and traditional Catholicism - as counterintuitive and contradictory as that may sound.

But just as we incorporate a Greek phrase in the Kyrie Eleison, and Jewish in the Amen and Alleluia, so too we may end up with a hybrid Gregorian Latin/charismatic/vernacular Mass....populated mostly by non-white or mixed people who don't carry the baggage and guilt trips that we white Northern American and Western Europeans have carried like anchors, lo, our entire lives.

thanks. I forgot how to spell in French. Obviously this means nothing I said is valid.

Seems to me, all that was needed was to keep the liturgy as it was and use the vernacular. Just as the liturgies of St. John Chrysostom are the same for so long with the vernacular used in the different countries so to the West could have done.

Article in our local (Atlanta) paper this morning about Nancy Pelosi (in working out some sort of Medicare deal in Congress with Republican Speaker John Boehner) would never vote for codification of the "Hyde Amendment" (which prohibits federal funding of abortion except in limited circumstances). And just why is this woman still receiving communion in Washington and San Francisco? Especially in the latter, which has a very conservative bishop...someone please explain!

Fr Ray Blake's parish in Brighton has just hosted a retreat preached by two young Norbertines. Check out his blog for details. One feature was the celebration of Mass in the Premonstratensian Rite. What effect does Sacrosanctum Concilium have on this Rite? None whatsoever. It predates Vatican II and the 20th century Liturgical Movement by centuries.

One effect of Summorum Pontificum has been the renewed interest in the traditional usages of the religious Orders. The Dominicans are leading the way (their rite predates Trent by three centuries) and the wholesale abandonment of these traditions in the 1960s is increasingly seen as both precipitous and misguided.

The 20th century (and as far as the liturgy is concerned Vatican II needs to be seen in this context) produced a 'designer liturgy' based on historico-liturgical assumptions which were fashionable at the time but now look increasingly dated. The fact that this liturgy was seen by at least some of its authors as a mere template on which innumerable variations could be superimposed - linguistic, musical, cultural - further complicates matters.

Attempts to fuse the two 'forms' (and then presumably to impose the result on everyone in the way Paul VI tried to do in 1969) are not just doomed to failure; they are intrinsically misconceived. One merely replaces one 'designer Mass' with another, to the benefit of no-one.