LAVISH ATTIRE FOR POPES, A HELP OR A HINDERANCE FOR MOVING THE CHURCH FORWARD?

My parents were married on December 1, 1945 in Livorno, Italia, my mother's home town. She grew up poor and what little they had as a family was destroyed during World War II as Livorno was bombed heavily. Their apartment building was completely destroyed and if not for fate, she and her family would have died in that bombing as most of the residents of the building went to the basement during the air raid alarm and when the building was hit it imploded into the basement. My mother and her family were elsewhere at the time! But they lost everything.

My parents honeymooned in Roma some three hour train ride south from Livorno. Part of their visit was an audience with Pope Pius XII. He was a very popular Italian pope. However my mother was not overly enamored with the papal regalia especially the ermine lined clothing His Holiness had on which appeared to be mink to my mother.

In today's rather casual culture, does this type of wear for popes help or hurt the image of the papacy and the Church? Is Pope Francis getting it right by simply wearing the house cassock of the Pope (and not very well at that)? 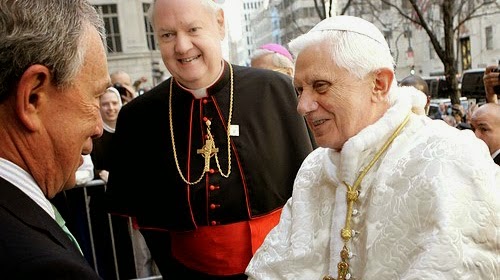 The traditional attire of the popes is not lavish. It simply how popes have dressed for centuries. The Orthodox bishops dress much more "lavishly" than Roman bishops or popes ever did. When I was young I remember Pope Paul VI and John Paul I using the sedia gestitoria. And guess what nobody had a problem with it or thought it was odd or haughty. It was simply what popes have always done.

To be honest Pope Francis dresses very slovenly like most people do today. And people like him because the mediia understood that Francis was liberal and they saw their chance to further damage the Church. I am convinced that this strange "pope worship" that we are experiencing has nothing to do with Francis but everything to do with Benedict XVI. The media and those liberal bishops saw that Benedict was trying to correct 50 years of scandal, heresy and failure. And had Benedict been 20 years younger he would have succeeded. Benedict was a gentle good man. He kissed babies, and deformed people and old people etc. but all we ever heard was the LIE about Prada red shows. When the truth is that a Latino cobler who works on the Via Borgo made the first pair of shoes as a gift to the Pope because he thought it would be a nice gesture. It's that simple.

But in the end I don't care if Francis wears red or black shoes but I care very much that he is causing confusion by not teaching the Faith clearly, ie adultrey, fornication etc.

The reality of today is that the vast majority of people who identify as Catholics do not believe in the Real Presence, the all male priesthood, the 7 sacraments, the moral teachings of the Church, the primacy of the pope, or the truth that the Catholic Church is the one true Church established by Christ Himself.

So how is a pope who dresses sloppily and does not teach clearly and doesn't tell sinners to repent and change, because their salvation is in danger, helping? Sure the NYT and CBS, ABC, NBC, MSNBC etc love Francis. So what.

What did Our Lord say about being loved by the world?

Why is Francis not teaching the Faith clearly, fearlessly and without compromise? No matter what he says, teaching that Catholic people living in adultery can receive the Body and Blood of the Saviour of the world without amendment of life and sacramental confession is evil. He could teach that wearing a tiara on his head and he would still be wrong and another Judas.

He should wear attire that is simple and distinctive. But something between a white t-shirt with red flip-flops, on one hand, and the extravagance your parents described.

When has Pope Francis taught that "Catholic people living in adultery can receive the Body and Blood of the Saviour..."?

When has Pope Francis taught that "Catholic people living in adultery can receive the Body and Blood of the Saviour..."?"

You are being deliberatley naive. Who sent Cardinal Kasper around the word to push that idea and invited him to give a special talk about it at the synod? Francis did that. Francis is preparing, testing the waters to promote this idea. And it is publicly known that as archbishop he taught that for years and as pipe famously called up a woman living in adultery and told he to go to communion.

Pope Francis has given many daily homilies which I read. He has often called sin a sin and called people not to be worldly. He assists upon frequent confession, more so than any recent pope I know of! He speaks about the devil and his influence, something that drives liberals crazy.

In terms of Cardinal Kasper, no one really knows what Pope Francis will approve. From everything i have read from cardinals in the know, if there is to be relaxation it will be in terms of the annulment procedure especially with those who are married outside of the Church because of a recognized/presumed Sacramental marriage in the Church.

I would say to take the word of the spouse him or herself and just be done with it and let that speak for itself. If there are lies involved in this testimony, leave it to the Lord at their personal judgment to take care of it!

I definitely prefer the papal style of Benedict (especially when visiting Orthodox churches...*ahem* :] ), but the thing that bothered me the most was the abrupt transition from Benedict's style to BAM, as-austere-as-can-be! It's just helped the media to paint Francis as the anti-Benedict, the long-awaited savior of that terrible institution stuck in the Middle Ages.

Knowing Pope Francis as we do now and after two years, I can't imagine him wearing what Pope Benedict is wearing on his trip to New York and Washington, DC. But with that said, for Pope Francis to wear this papal garb would be a huge step in the direction of personal humility as odd as that sounds.

Well, the Pope should dress with the dignity that belongs to the office. At present the Pope is not doing such....if anything it's a turn off towards the Faith.

I think a Pope should dress according to the occasion. If he is just meeting with ordinary people, then his white "working clothes" is okay to wear.


But if he's meeting with foreign dignitaries or hierarchies of the Easter Church, or celebrating a Pontifical Mass, then he should wear the fineries that the rubrics call for.


If he's meeting with ordinary people after a solemn celebration, it's understandable that he would still be in his fineries. It would be unthinkable for him to change to his daily wear while marching down the aisle after a Pontifical Mass and getting into the popemobile to meet the people.

Yes, my mother's childhood apartment, destroyed in WWII was across the street from the Octagon Church where she converted.

"Yes, my mother's childhood apartment, destroyed in WWII was across the street from the Octagon Church where she converted."

Wow! There's the connection to U.S. Catholicsm right there! Thanks, Father and God bless.