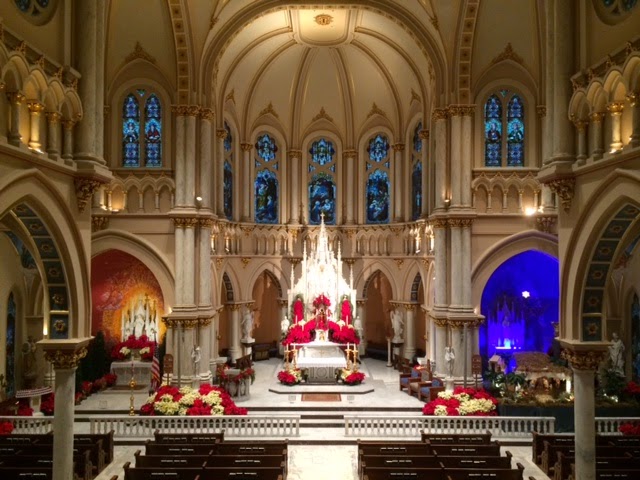 We had glorious Christmas Solemn Masses all in the Ordinary Form. For the second year in a row, our Midnight Mass (actually at Midnight, no actually at 12:10 AM as our choral prelude went a bit over time) was celebrated ad orientem for the Liturgy of the Eucharist.

The choir was splendid as was the congregation's singing. After the Latin Introit, all sang with gusto "Come All Ye Faithful" accompanied by organ, trumpet and tympani. The entire Mass was chanted including all the priest's parts.

The Kyrie was the Mass of the Angels and all chanted the Jubilatio Deo Gloria in Latin--splendidly I might add.

We chanted Credo III in Latin genuflecting at the "Incarnatus est..." I was pleased to hear behind me so many in the congregation chanting it with gusto.

The Sanctus, Mystery of Faith and Great Amen were from the Mass of Creation (but with organ, trumpet and tympani it was majestic).

The Agnus Dei was Took's Mass of the Holy Trinity, which is truly splendid.

But the most important and completely uncontroversial aspect of our Solemn Sung Midnight Mass was that it was celebrated ad orientem for the Liturgy of the Eucharist.

The Introductory and concluding Rites were from the chair and the Liturgy of the Word is as it is done in the Ordinary Form, from the ambo.

But it was completely normal and I needed to make no explanation about it, none whatsoever and no one blinked an eye, asked why we did it or complained that it was so "pre-Vatican II." This is major growth for modern Catholics to say the least!

And finally, while our altar railing isn't going to be blessed until January 4th's EF High Mass at 2 PM, people approached the ministers of Holy Communion who stood behind the railing and received either standing or kneeling, in the hand or on the tongue. I had several people kneel and receive in the hand. Even receiving in the hand while kneeling appears to me to be more reverent.

A blessed Christmas to you all and to all a good night!

Congratulations Father! This just proves that the two rites CAN mutually benefit one another, and the Novus Ordo CAN be done well.

While I appreciate your sentiment--which I share regarding the desirability of mutual enrichment--it appears to me that the midnight Mass Fr. McDonald describes was straight ordinary form with no particular crossover from the vetus ordo.

I wonder whether it doesn't denigrate the Novus Ordo to ascribe every instance of it's being celebrated by the books to influence of the TLM.

Did you chant the Eucharistic Prayer? I assume it was the Roman Canon which has proper Communicantes for the Christmas Octave and this takes 12-13 minutes and is a bit of a test for the celebrant's vocal stamina.

I had to look up the Mass of Creation on YouTube and it's not too 'pop' in style, is easy to sing, and with organ, brass and timpani would indeed sound well.

I would be inclined to use Adeste Fideles as the opening hymn and then chant the Introit. In the OF the sung Introit begins the Mass, so it is surely a liturgical solecism to follow it with a congregational hymn.

There is the option to do the concluding rites at the altar - I don't see the point of returning to the chair. Also, I would like to see the celebrant intone the Gloria in Excelsis facing the altar; the symbolism of the priest leading his people in this great hymn of praise, particularly on 'this most holy night' is important.

Of course I chanted the preface. With the Roman Canon I chanted the Epeclesis and the words of consecration only and then the per Ipsum.

Lest it be thought that the reform of the reform is sweeping the South only in the larger churches in population centers from Greenville to Macon to Chattanooga … From the program posted for this evening’s anticipated Mass of the Holy Family in JBS's small mountain resort church:

Mass Proper: Simple English Propers for The Holy Family by Adam Bartlette (introit, offertory, and communion chants from the propers book in the pew racks)

Perfetto! And while the EF will have a place in the Church and thanks be to God and Pope Benedict XVI, the Ordinary Form celebrated in continuity with the EF is the wave of the future and which when celebrated with EF sensibiities is what SC wanted, no doubt about it.

I couldn't agree more. This year the live BBC TV broadcast of Midnight Mass was from Arundel Cathedral, an imposing Gothic revival church. You may recall that the diocesan bishop resigned earlier this year following revelations that he had had affairs with two women (one of them married) and so the Mass was celebrated by the Dean, with another priest concelebrating and two deacons. The amateur mixed choir was augmented by the children's choir (mostly girls, although the D.O.M., Elizabeth Stratford is keen to recruit more boys). They sang from the gallery at the west end, but were in choir robes. There were perhaps too many carols sung during Mass, but the Mass setting was Gounod in C with Credo III, and everything was sung well. The ROTR influence was noticeable in that:
1. The altar had the full 'Benedictine' arrangement of six candles and large centrally-placed crucifix.
2. The celebrant(s) and ministers wore matching gold vestments with red trimmings in a traditional Gothic style.
3. There was no informal greeting at the start of Mass - the Dean welcomed viewers in a pre-recorded clip. There was no departure from the official text which was recited in a sober and dignified manner with all the rubrics observed. This was greatly helped by the dignified language of the current translation.
4. The Gospel was sung and the deacon also read the Prayer of the Faithful. The tradition of epistle and gospel side is retained since there are two ambos. The Preface was sung.
5. At the (standing) Communion the two priests administered the Host, while the deacons administered the Chalice, assisted by two young men in albs who were already in the sanctuary. I assume that they were seminarians and instituted acolytes.

I believe Benedict XVI brought back the Traditional Form of the Mass to save the Church, because the Mass decline continues under the Ordinary Form and there seems to be nothing that can stem that.