THE DELETERIOUS EFFECTS OF FOREGOING PAPAL PROTOCOL AND MOVING THE PAPACY FROM THE SUBLIME TO THE REDICULOUS? THAT IS THE QUESTION

Yes, Francis is a veritable quote machine, tossing off-the-cuff bon mots that the public finds enormously appealing in large part because they are coming from a Roman pontiff — not an office known for its improv routines.

We all know that since day one, more traditional minded Catholics were concerned about the papal style of Pope Francis and what appeared to be a complete trashing of his predecessor's restoration of papal protocol and style. In this regard as well as in the academic comparison of the two popes, Pope Francis has either intentionally or unintentionally (maybe better consciously or unconsciously) made himself the anti-Benedict.

What else is starting to create a backlash against the Holy Father from within the Church and from diverse courts?

1. The Holy Father dislikes intellectuals or academics. Often his remarks concerning them seem to indicate an animus against his predecessor's brilliant academic career. But let's face it, many academics but certainly not all, are progressives in the Church and the Holy Father doesn't seem to like them. He prefers the vulgar and I mean that term in an academic way.

2. The Holy Father dislikes his bishops and priests and resorts to name calling in a very negative or vulgar way. When he calls them "princes" this is not a positive thing at all (although it could have a positive connotation if correctly understood). He associates the ruling class of the Church, meaning bishops in general as the modern day Pharisees (a very common 1970's tactic by the way). He has called seminarians "little monsters" and priests clericalists who want to move up the ladder. He has called nuns pickled peppered faces or old maids. Of course there is always some truth to negative stereotypes but is it good for a pope to stereotype bishops, priests and religious in this way? Is it papal?

3. The progressive liturgical blog, Praytell, is freaking out over the Our Lady of Guadeloupe Mass to be held at St. Peter's on Friday with uses a concert Mass which is somewhat spirited, but nonetheless a concert Mass for the Mass parts in Spanish, the Kyrie, Credo, Sanctus and Agnus Dei. Along with the propers being chanted in Latin the congregation will be mere concert goers in Praytell's view and this is so-pre-Vatican II of course.

The Gloria from this Mass setting:

4. The Holy Father seems to have a deadly combination of South American machismo and Italian chauvinism when it comes to women and their roles. And the terms he uses appeals to rank and file laity of a certain perspective, some might say class, who love when someone in power joins them in their base instincts. I know certain Italians of a certain class who would eat up Pope Francis' more vulgar, off-the-cuff humorous remarks. I can say that as a half-Italian. But I know many Italians of another class who would not be amused with a pope using such language. It's funny now because it is so novel! But is it funny for a pope to debase the papacy?

Here is the perspective of feminists about the non-papal language of Pope Francis:


Religion News Service December 10, 2014
When Pope Francis this month wanted to highlight his appointment of several women to a blue-ribbon theological commission, he called the female theologians “strawberries on the cake.”
Yikes.

Two weeks earlier, when the pontiff gave a speech to the European Parliament, he used another lady-based analogy, this time underscoring the continent’s demographic decline and cultural crisis by comparing Europe to a grandmother who is “no longer fertile and vibrant.”
Ouch.

Yes, Francis is a veritable quote machine, tossing off-the-cuff bon mots that the public finds enormously appealing in large part because they are coming from a Roman pontiff — not an office known for its improv routines.

But when he speaks about women, Francis can sound a lot like the (almost) 78-year-old Argentine churchman that he is, using analogies that sound alternately condescending and impolitic, even if well-intentioned.

Indeed, Francis has spoken repeatedly of the “feminine genius” and the need for a church to develop “a deeper theology of women,” and of his determination to promote women to senior positions in Rome. He also points out that some of his remarks are meant as jokes, the fruit of a sense of humor that is part of his appeal.

Still, not everyone is amused.

“I am at a loss to see how this could be other than insulting to women who’ve already given up having families of their own to serve God,” The Washington Post’s Melinda Henneberger wrote after a speech in which the pope warned nuns not to become spiritual “old maids.”
And in a Los Angeles Times column this week, New Testament scholar Candida Moss of Notre Dame and Yale Bible professor Joel Baden blasted Francis’ granny comments to the European Parliament as “nothing other than crass chauvinism.”

For all his positive comments and reforms, they said, the pope “reveals a highly patriarchal view” of the value and traditional role of women.

Here are seven examples of what these critics are talking about:

2. “I am wary of ‘masculinity in a skirt.’”
“It is necessary to broaden the opportunities for a stronger presence of women in the church. I am wary of a solution that can be reduced to a kind of ‘female machismo’ (“machismo in gonnella,” he said in Italian, or “masculinity in a skirt”) because a woman has a different make-up than a man. But what I hear about the role of women is often inspired by an ideology of machismo.”
— Interview with Jesuit publications, September 2013

My final comment: A pope who uses language in the way Pope Francis does above would not use papal protocol in the image below: 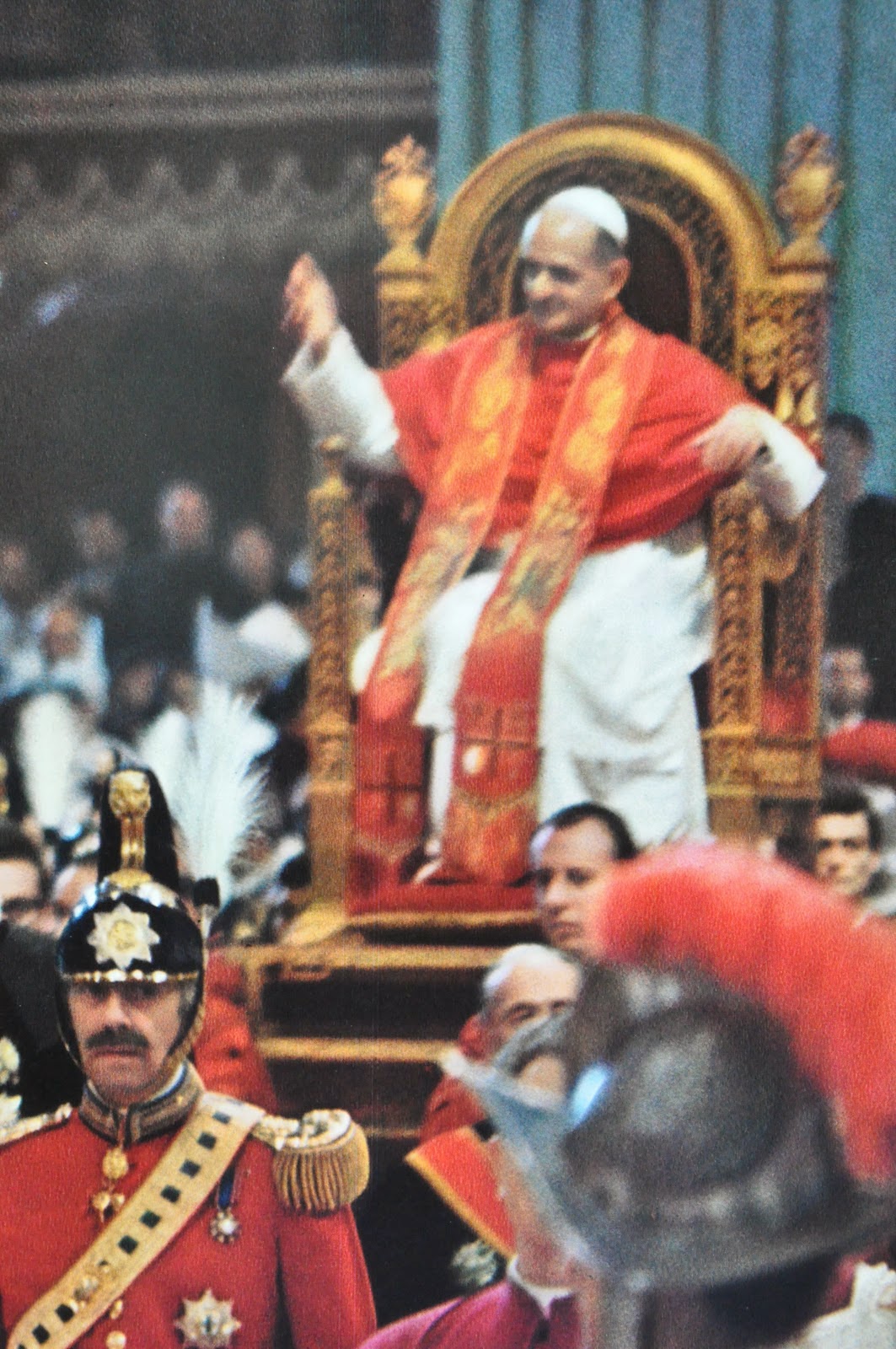 If he's trying to be funny, it's not working. This is not to say a Pope can't have a sense of humor, or even show off his personality, but with high offices comes high expectations.

This is something I really liked about Pope Benedict XVI, that he was trying to curb the cult of personality and that really brought me to listen to him and embrace him. (I tend to think Pope Benedict XVI is an ISTJ like myself, and might explain my like of him even before he became Pope)

I'm not rippping Pope Francis though, he's certainly allowed to be his own person, but I do think he's trying too hard to be something, and for that it's a major turn off especially to those of a traditional nature which tend to be more melancholic and reserve than most.

"he's certainly allowed to be his own person"

Except that, as the Vicar of Christ, he really is not his own person. It can be argued that he demeans the office when he imposes superficial aspects of his own personality on it excessively.

Well, he made the feminazis angry. That is the first thing he has done that I like.

Of course Henry, I most certainly agree with you...I'm certainly applying his own person to things within reason. The person of Jorge Bergolio should be minimal...The over emphasis of the person is indeed a problem.