Cardinal Müller: Separation of Theory and Praxis Would be a Heresy 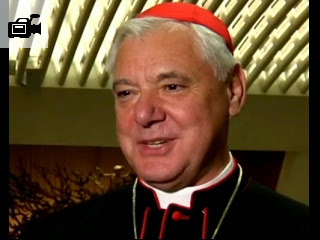 Prefect of the Congregation of the Faith in the "Osservatore Romano"said that ny separation of theory and practice of the faith would be the manifestation of a subtle Christological heresy in principle ".

Vatican City (kath.net/KAP) The Prefect of the Vatican Congregation of Doctrine of the Faith, Cardinal Gerhard Ludwig Müller, reiterating that there should be no gap between teaching and pastoral care in the Catholic Church. "Every separation of theory and practice of the faith would be the manifestation of a subtle Christological heresy in principle," Mueller said in a speech, which was published by the Vatican newspaper "L'Osservatore Romano" on Tuesday. This would "obscure" the dynamics of the Incarnation, which is part of any "healthy theology", said Mueller. Christ had said, "I am the way, the truth and the life. Therefore, there can be no truth without life and no life without truth.

The occasion was the opening of the General Assembly of the International Theological Commission of the Vatican on Monday. Müller is the President of the Advisory Board of the CDF. Cardinal Müller had said several times in the the Synod of Bishops on the family, that there can be no change in the Church's practice in relation to the divorced and remarried, because thereby the indissolubility of marriage will be questioned. Cardinal Müller, Prefect of the CDF: Statements Synod of Bishops publish (engl.) Copyright 2014 Catholic News Agency, Vienna, Austria All rights reserved. Photo Cardinal Müller (c) Diocese of Regensburg

Cardinal Scola has also had some good things to say lately:
http://www.catholicnewsagency.com/news/cardinal-scola-pope-francis-will-stand-with-tradition-on-marriage-49312/

This post is not about the social crisis going on in America at this time and if I post something on it I will close the comment section because of irresponsible comments that I have no time to police.

Some of us on the blog have long been saying that to separate practice from doctrine is heresy and hypocritical. I believe a disturbingly high percentage of Priests and Bishops and Cardinals speak tongue-in-cheek on doctrinal matters.

"I believe a disturbingly high percentage of Priests and Bishops and Cardinals speak tongue-in-cheek on doctrinal matters."

Wrong metaphor, Gene. Didn't you mean "with forked tongues"? (I'm afraid they're serious. Would that the stuff they spout were only humor.)

Henry, it is both.

Agreed, and the separation of doctrine from praxis is a huge problem. This is one of the reasons doctrine can't be a hinderance and we can't separate the two.