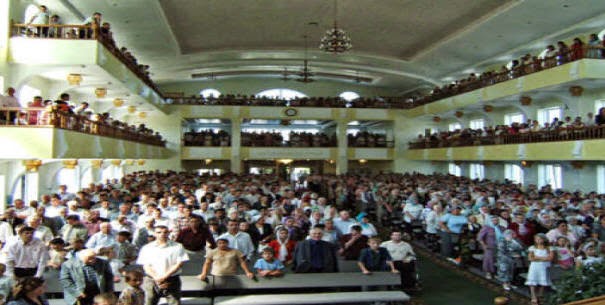 The world’s Catholic population increased by 15 million in the past year, with some growth on every continent, according to new statistics from the Fides news service.

The latest figures, which date to the end of 2012, show a worldwide Catholic population of 1.2 billion. That accounts for 17.49% of the world’s overall population: a figure that is down slightly from the previous year’s 17.50%.

The number of Catholics grew most rapidly in Africa and the Americas (which are treated as one continent in Vatican statistics), with Asia following and Europe and Oceania lagging behind.

The key question here is what kind of Catholics will we get? Practicing Catholics on fire for God and the Church? Or Catholics in Name Only like those who populate our legislatures and invoke "social justice" to violate their own Church's teachings? Only time will tell.

Catholicism is growing in those areas of the world where the faith is strongest and declining in those areas where it is weakest. Is this surprising? That the number of Catholics worldwide increased by 15 million, but the percentage vis-a-vis the whole decreased, reveals(it would seem) that those belonging to other religions and those not affiliated with one increased in numbers also.

Growing perhaps but keeping up with the global birthrate?

What did you intend to signify by capitalizing "Name Only"?

In the long run, which of these two is more helpful for the spreading of the Gospel: (a.) a large Church with lukewarm Catholics, or (b.) a small Church with committed Catholics? Knowing the answer to this will help us know whether or not to celebrate these latest figures.

Since the present growth is more biological than evangelical, I'm not sure it can be attributed to any particular pope.

JBS, Jesus said for us to spread the Gospel to all nations...all over the world....everybody. I haven't seen the part where he talks about having a small, committed, (elite?) group.

What Jesus said was to preach the Gospel all over the world to every creature…He indicated, as did the Apostle Paul, that true believers would be a small group. So, get your NT theology right.

Further still, Jesus said that He would only accept those who were "hot", and that the lukewarm would be "vomited" from His mouth (Rev. 3:16). So in a lot of ways, the "elite" follower idea isn't far off. Yes, the Church is meant for sinners, not just for the perfect, but the Lord's true followers will, by all indications, be a minority of those who profess to follow Him.