IF YOU CAN'T TRUST THE NEW YORK TIMES ABOUT A BOY AND HIS DOG, THEN WHO CAN YOU TRUST? 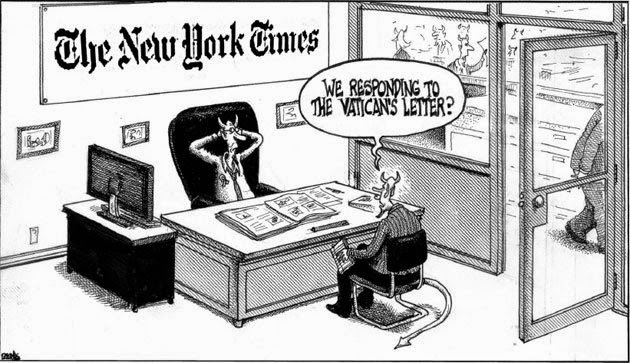 Well, after putting on their front page the article that shot across the world and to this blog, we now find the New York Times retracting the story about Pope Francis and the boy and his dog who had died. Evidently the Holy Father did not declare ex-cathedra that the boy's dog was in heaven. I had so hoped that it was true. The New York Times' "mea culpa" (said three times while striking the chest) is truly crushing!

If only priests who canonized crooks, criminals and mortal sinners at their Requiem Masses would declare such retractions! Because we all know that it is more plausible for dogs to be in heaven than some of those who priests canonize at Funeral Masses! But I digress.

As we all know, though, the Mass Media who has latched on to Pope Francis to pursue its own liberal, secularizing goals and manipulating the words of the pope to do so, has been caught with their hands in the cookie jar! As Pope Francis has stated just this past Wednesday to his audience in St. Peter's Square, he said don't listen to what the media says about him or the synod or anything else (to paraphrase) listen to what I say. It is public record. Thank you Pope Francis!

From the New York Times:


Correction: December 12, 2014
An earlier version of this article misstated the circumstances of Pope Francis’ remarks. He made them in a general audience at the Vatican, not in consoling a distraught boy whose dog had died. The article also misstated what Francis is known to have said. According to Vatican Radio, Francis said: “The Holy Scripture teaches us that the fulfillment of this wonderful design also affects everything around us,” which was interpreted to mean he believes animals go to heaven. Francis is not known to have said: “One day, we will see our animals again in the eternity of Christ. Paradise is open to all of God’s creatures.’’ (Those remarks were once made by Pope Paul VI to a distraught child, and were cited in a Corriere della Sera article that concluded Francis believes animals go to heaven.) An earlier version also referred incompletely to the largest animal protection group in the United States. It is the Humane Society of the United States, not just the Humane Society.

Immense damage has been done in the last year and a half by a pope who is imprudent and doesn't care about the scandal he causes and by a media that uses that character flaw to attack the Church. The damage is so great that it really doesn't matter any more what either one says.

Thank God for voices like yours Fr., who, unlike other Radical Catholic Reactionary bloggers, actually have common sense enough NOT to declare every action of Pope Francis satanic, and to realize if it looks like it is violating Church teaching, doctrine, and/or morals from him, IT ISN'T!

One can trust neither

Ha! So, the NY Times REPEATED the remark he DID NOT SAY! I suppose that's for the readers who skim articles. All I can say, you can't trust ANYTHING you read anymore.

"All the news that's fit to print." (That's the motto of the NY Times, if you didn't know.)