This is copied from the Vatican Insider:


Cardinal Lajolo on the speech to the Curia: nothing like this has ever happened before 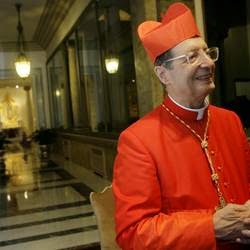 The cardinal claims: 'The Pope talks about himself as well. Gossip can kill'

Giacomo Galeazzi Vatican City 'To be honest, nothing like this has ever happened before'. Cardinal Giovanni Lajolo, the former Vatican governor and foreign minister, does not hide his surprise. 'It is the first time this has happened; never before had a Pope set us in the Curia a series of pathologies that we must examine ourselves on.' All along, says the cardinal who has been head of some of the most important offices of the Holy See for many years,  'the exchange of Christmas wishes has been a customary occasion, that follows a usual pattern'.

What did you expect from Pope Francis' speech?

'On this occasion, his predecessors would usually say nothing but the most relevant events of the past year. They summed up the principal events in the Church and in their apostolic activity. So you could have expected Francis to talk about his travels to the Holy See and Turkey, instead he said nothing about them. Maybe he will refer to these in his speech to the ambassadors to the Vatican.'

How did you welcome the Pope's warning?

'It is the request of an examination of conscience, of an end-of-the-year confession. For the first time a Pope asks the Curia to examine itself on a number of problematic issues. For instance, on the basis of my experiences of the Curia, I believe that a simplification of procedures would diminish scandals.'

Why does the Pope implicate cardinals and bishops?

'The seven deadly sins are within all of us. Even the Pope often calls himself a sinner. And if he is a sinner, never mind us. Scandals will continue to exist as long as the world exists. The Gospel says that it is necessary for scandals to take place, but those who cause them will be sorry. It is the word of Christ, which is unquestionable for us.'

So you cannot avoid scandals?

'It is the duty of the superiors in the Curia to make sure these things do not happen. And since he holds the most responsibility, the Pope is the first one to deal with them. Reforming institutions is necessary but it is not enough. We need a conversion of the hearts. The Church needs constant reformations, and the Roman Curia in particular, which gathers the tensions and issues of the local Churches throughout the whole world.

Will the reforms under way at the moment be enough?

'it is useful for ecclesiastical institutions to become simpler and more efficient but there are men whose hearts are known to be a mess within them. Tacitus' question is extremely current; what do we need good laws for, if we do not have good values? Honest conduct is not established by law. Francis asks us to carefully reflect on our behaviour and our weaknesses, thinking of the evil that we do. Starting from gossip, that can kill.'

I'll go with Cardinal Burke's remarks. I am sick of the Pope's sycophants playing verbal Twister trying to make us believe he is saying something different or that we are hard of hearing.

I totally agree with Gene. It is well beyond ridiculous. The only thing that is saving the Holy Father is his office which people respect.

Yes, Jan. It is like in the military…you salute the rank and not the person. Most officers were competent and dedicated…some were real bastards, but still you could respect them. But, there were a few really bad officers who were either incompetent or who abused their rank. There were a very few under whom you would not want to serve in combat. But, you respect the rank because that is what, ultimately, makes the Corps or Unit work and keeps you alive. Structure, order, duty make the system work. So, salute the Pope, but don't count on him in a fight with the Devil.

'You salute the rank and not the person'. Wrong, otherwise one would have to salute a dummy in the window of a military tailor. You salute the person who holds the rank. As an officer you also salute a woman - it is the military equivalent of raising one's hat. In the British army VC holders, whatever their rank, are saluted. I remember the retirement parade for Rambahadur Limbu VC, a Ghurkha who won the VC in Borneo in the 1960s and retired as a captain. The Duke of Edinburgh, a Field Marshal, saluted him and not the other way round.

Well, John, in the US armed forces we were taught that you salute the rank and not the person. I don't think it needs to be interpreted in quite the way you interpret it. The person represents a rank. You salute what the person with the rank represents. In combat, if one officer is killed, another steps in to take his place. You know nothing about him, perhaps, but you obey his orders unless they are illegal. Of course, there are occasions when superiors salute inferiors as a mark of respect for what they have accomplished. This is at it should be…good officers understand magnanimity.

Francis.....the first pope to celebrate Festivus. And of course we all know that Festivus begins with the Airing of Grievances.

Of course that is followed by the feats of strength, which will probably take place at Christmas Eve Mass when Francis appoints Kasper as chief theologian for the whole world and makes Cardinal Burke bus tables in the Vatican Motel.

Then comes the Miracle. Which will probably take place on Christmas Day. Hummmmm.....I wonder what the god of surprises has in store for us. Surely somebody isn't going to stand in the middle of St. Peter's square and try and ascend into Heaven........my crystal ball tells me that someone very famous and worshiped has a surprise up his sleeve. Could it be the end of mandatory celibacy for the clergy....could be. Could it be the tolerance for divorce......very likely. Could it be the public approval of homosexual activity.......in time. Could it be approval of sacraligeouscommunions.....or something like a protestant of renown is going to give the Christmas Eve homily in the Vatican, someone like Rick Warren maybe? I don't know but something tells me that one of the above is going to happen.

It is right and proper and I would say an expectation that any person that holds the Catholic faith, who believes in all the Church teaches and requires one to believe, should respect the occupant of the Petrine office. The person should do so out of respect for the office, if not the person who holds it, and as a sign of allegiance to the Holy Roman Church of whom the Bishop of Rome is the earthly head. It is incumbent that all the faithful pray for the Holy Father that he has the strength, fortitude,wisdom and spiritual guidance to perform the priestly and administrative functions that are necessary for the office he holds and that he will carry out the required functions in such a way as will be pleasing to God.
We must keep in mind that the Pope is a human being. While he has infallibility in proclaiming doctrine in matters of faith and morals , impeccability was not conferred on him at his election.

“Crucify him; crucify him.” Sheesh, does it never stop? A member of the Curia offers a sympathetic interpretation of Francis’s address and now he is just a “sycophant.”

I will be honest with you: On a meanness scale of 1-10 so many of the remarks on this Blog, including even especially about Francis, score 11. And please do not sidestep the point with the usual dismissive comment that only liberals whine and complain about meanness.

Anon 2, but it is liberals who whine and complain about meanness. It is their universal fall back position. Perhaps you would prefer a term such as "myrmidons."

Although the honor system in the USA is different, it is my understanding that even superiors salute uniformed Congressional Medal of Honor recipients, not unlike your Victoria Cross protocol.

As far as rank is concerned, I'm not sure how well this compares with the papacy. In a republic, a captain, colonel, general, etc. does not represent anyone in particular, while a bishop, especially the bishop of Rome, represents the fullness of Christ the High Priest. So, gestures of reverence offered a bishop are indeed given towards the person of Christ, for which there's no obvious equivalent in the military.

No, Gene, I do not prefer another term. And of course liberals can also be guilty of making mean and spiteful comments. As I have said before, sometimes incivility has an appropriate place, but on this Blog it is often taken to undue excess; and on a Catholic blog no less, even with regard to the Holy Father.

There have been quite a number of popes who have been canonized but there have also been a number in the past who (to put it mildly) have been less than God desired them to be. The Pope we have is the one we've got. Any kind of fair and objective assessment of a pope's reign can only be done after he no longer holds the office. Popes are human beings and have their faults and defects just like the rest of us. We do not have to accept every opinion he has.
The Church has survived bad popes and anti-popes and will persevere, endure, and continue on come what may. If one finds some things emanating from Rome that present a difficulty and challenge to one's faith, the positive and constructive thing to do is to pray for the Holy Father and to offer up sacrifices and have Masses said for him.

In other news, the Cuban government, which the Pope wants the US to be cozy with, just sank a boat containing 32 refugees, including children, that was trying to reach the US. I anxiously await the Pope's message condemning the act...

Any comment that is vitriolic and disrespectful of the laity in general, and Pope Francis, bishops and priests in particular will not be posted!