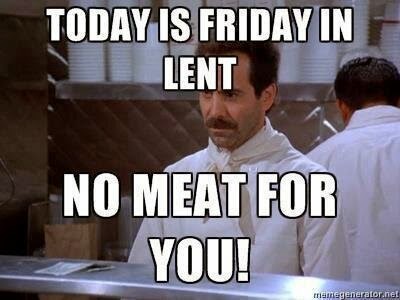 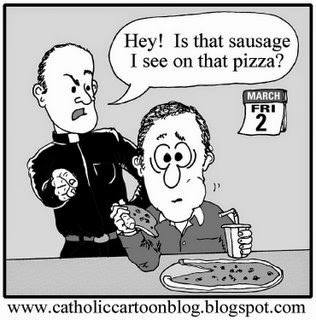 I am an army brat as my father was a career army man. In the late 1950's and all the way until my father retired from the army in 1965, army personnel and their dependents, were dispensed from the Friday "no meat" law of the Church.

In fact, when I was in the second grade and brought my bag lunch to school on a Friday, I found a hamburger sandwich in the bag which I proceeded to eat publicly in the school cafeteria. I was promptly reporter to Sr. Angela by a so-called friend of mine sitting next to me that I was eating a hamburger sandwich on Friday and to save my soul from going to hell, I was mercifully reported.

Of course I told Sister that I had a dispensation. She thought I was being smart! I was of course. But Sister did not know the privileges of being an army brat and dependent. So the principal called my father to find out why I was giving such poor example to the other second graders at the school. He assure her that military dependents had the dispensation and that no one in the army was going to hell for eating meat on Friday.

She suggested to prevent scandal in the future that I not be given a meat lunch on Friday!

These sorts of laws carried to an extreme do no one any good and distract us from the law of love.

If a hotdog on Friday can send us to hell, why not then do something that really deserves it.

I'm not opposed to ascetical practicing such as fasting and abstinence. I think these are great and should be presented as leading to a great good. We should follow the Eastern Church's philosophy on it which is not to turn it into a sin if one fails to do so and a cause for eternal damnation.

But on Friday, if I know that I'm eating with friends who might not fix fish, then I should be able to substitute some other kind of ascetical penance or forgo it altogether and not worry about the eternal damnation of my soul. It shouldn't be classified a mortal sin!

But with that said, legalism of the 1950's and 60's in the Church has been overcome. We have more serious issues to mend and legalism isn't one of them.
Posted by Fr. Allan J. McDonald at Tuesday, December 16, 2014

The difference between discipline and dogma.

As a vegetarian, does one take up eating meat for Lent and meatless Fridays? I posed that question to a priest and we had a good chuckle.

While the law must guide us to a norm, we've been given some latitude with the Friday penance by Paul VI. I still follow the Friday abstinence 99% of the time because Holy Mother Church made it easy to remind me to do a penance. It also reminds me of my Catholic culture and what sets us apart. Of course, that will be interpreted by the Pope as having a "weak heart" or by Thomas Rosica, CSB of being an Essene (may we all be such) and refusing to go out to the "periphery."

May our punishment from God end soon.

I think we can all agree with you that you would not have gone to Hell for that. However, the Friday penance is not about fear of Hell, but about grateful commemoration of the Good Friday Passion of Christ. A Christian who loves what Christ does for us will willingly join with other Christians in showing this gratitude on Fridays. Pope Paul VI said the duty of Friday penance is grave matter, but he also went to great lengths to explain why it is so. It is certainly something much more than fear of Hell.

The issue isn't whether eating meat on Friday back in the day would damn us, its flaunting the Church's law. As a Divinely instituted lawgiver, one doesn't just cavalierly assume that eating meat when the Church says not to isn't that big of a deal.

Its like the Sunday obligation. If eating meat on Fridays in which the Church bound us under pain of sin not to isn't a big deal, than skipping a Sunday here and there isn't a biggy either. That is the way that argument goes, and I don't think we want to go there.

It is true, however, that whatever legalism existed in the 1950s (at least in America) is certainly no problem any more.

"But with that said, legalism of the 1950's and 60's in the Church has been overcome. We have more serious issues to mend and legalism isn't one of them."

Yes Father, we do "have more serious issues to mend". Besides we all know their certainly isn't any more legalism and rigidity in the Church today. Naw, especially those Modernists who aren't legalistic at all. (You know the kind, those who say Catholics who practice the faith with fidelity to issues of faith, morals and disciplines are being... um, "legalistic"?)

Could not one name some of their particular... "legalisms"?

1). Doctrine is changeable and negotiable and is ever in flux. One should *never* be so legalistic to think that doctrine cannot change. After all, what is truth?

2). The disciplines of canon law are not for your average Catholic and, besides, they can be changed just like St. Pope JPII did it in the early 1980s. There, you see? A saint of the Church was not legalistic!

3). Biblical scholarship should encompass *only* the Historical-Critical method of exegesis (sic) and *only* Fr. Raymond Brown's texts should be used at Catholic seminaries and universities. All others are to be viewed as legalistic, rigid and inflexible.

5) The so-called moral issues are only "moral" to those who believe them to be and should never be taught in religious education programs as "non-negotiable" and foisted upon the impressionable minds of young Catholics. That is an inflexible and legalistic view of presenting morality.

6) The so-called "tradition" of wearing religious habits is a Medieval, rigorist and legalistic way of "practicing" the faith and should be completely and permanently discarded. One should never-ever wear their religion "on their sleeve", so-to-speak. It is legalistic and intolerant to those lay Catholics who do not wear "habits".

What about all of those poor devils who have been burning in hell for years for meat on Friday? Oops?

Sorry for the grammatical issues, all.

Good grief, I am a "sorry" catechist today.

Juden, you must have a reading comprehension problem.

If anything, the crisis in the Church can be summed up in two points.

1. Liturgical: Without the worship of God correct, everything else will fail in comparison.

2. Discipline: the lack of enforcement of the laws that are on the books has lead to a free for all in the Church.

I agree with the others about the Friday discipline of not having meat, it's not about avoiding hell, it's about uniting ourselves to Christ Jesus....As alluded to by many in other comments on different posts, the pendulum has swung way too far left.

This papacy is proving to be a chastisement...God help us all.

I am not sure legalism was the quite the problem that some seem to remember. I was a child of the 50’s and 60’s and I don’t recall ever thinking a hot dog would cause me or anyone else to become hell-bound. There was for sure a row of smelly sacks containing egg salad or peanut butter in the back of the classroom each Friday, but I really don’t remember any fear of hell if I had forgotten the day and somehow slipped up and made myself a baloney sandwich that escaped my father’s notice. What I do remember is Fr. Brennan telling us that if we were to be invited to a friend’s house to eat on a Friday and found them eating meat, we were to politely eat the meat and thank them very much, finding something else to give up. He also said if Mother forgot herself and fried bacon for breakfast, we were to eat it gladly. Apparently Fr. Brennan thought the larger sin was being an ungrateful guest or wasting good food. Was my childhood priest unique or is that maybe some of us reflect back at our Catholic youth through the lens of popular Catholic bashing?

You may grow up some day preacher...

As a young child and even into the teenage years the Friday abstinence discipline was looked on by me at the time as as having a disproportionate gravitas (especially against the perspective and attitudes of today). If the Church said something was grave matter and a serious sin if not practiced, then so it was and one didn't question it.
Now, if a child attended public school and meat was served, no one would expect that child to throw it away. Common sense prevailed. One made every effort to obey Church teaching however. So Friday for Catholics in public school was usually take a lunch to school day.

Can. 1249 All Christ's faithful are obliged by divine law, each in his or her own way, to do penance. However, so that all may be joined together in a certain common practice of penance, days of penance are prescribed. On these days the faithful are in a special manner to devote themselves to prayer, to engage in works of piety and charity, and to deny themselves, by fulfilling their obligations more faithfully and especially by observing the fast and abstinence which the following canons prescribe.

Can. 1250 The days and times of penance for the universal Church are each Friday of the whole year and the season of Lent.

Can. 1253 The Episcopal Conference can determine more particular ways in which fasting and abstinence are to be observed. In place of abstinence or fasting it can substitute, in whole or in part, other forms of penance, especially works of charity and exercises of piety.

The local Bishop determines what you are bound to in your area.

Gee, Father, you were quite the renegade as a kid; baptizing your dog, eating meat on Friday in front of the other kids with nary a thought of the scandal of it.

I know what happened; the nuns saw all this and prayed doubly hard for you, thinking you were on the expressway to hell, and they prayed you all the way into the priesthood!!!!

To desire something forbidden is to desire evil....how can we desire evil without becoming evil?

This is how lusting after a woman can make us commit adultery in our hearts. We might not do the physical act, but our hearts desire it, fondle it, seek pleasure in the imagination of it...

To desire what you know is forbidden by the Church is to intentionally disobey the Church. If it's a "small thing" it nevertheless establishes the precedent that you are your own Pope. Eventually it WILL lead to graver matter.