THE CASE FOR THE NEUTRAL LANGUAGE OF LATIN

The architect for this project was Azar/Walsh (Kevin Walsh and Kamal Azar) both of whom are my parishioners at St. Joseph Church, Macon, Georgia!!!!! 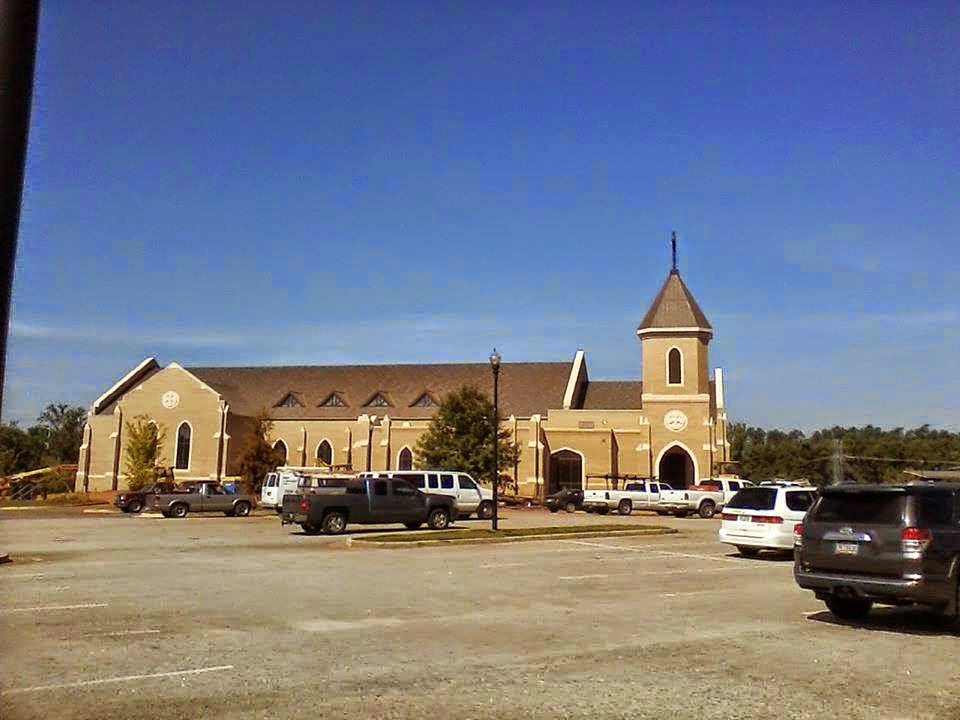 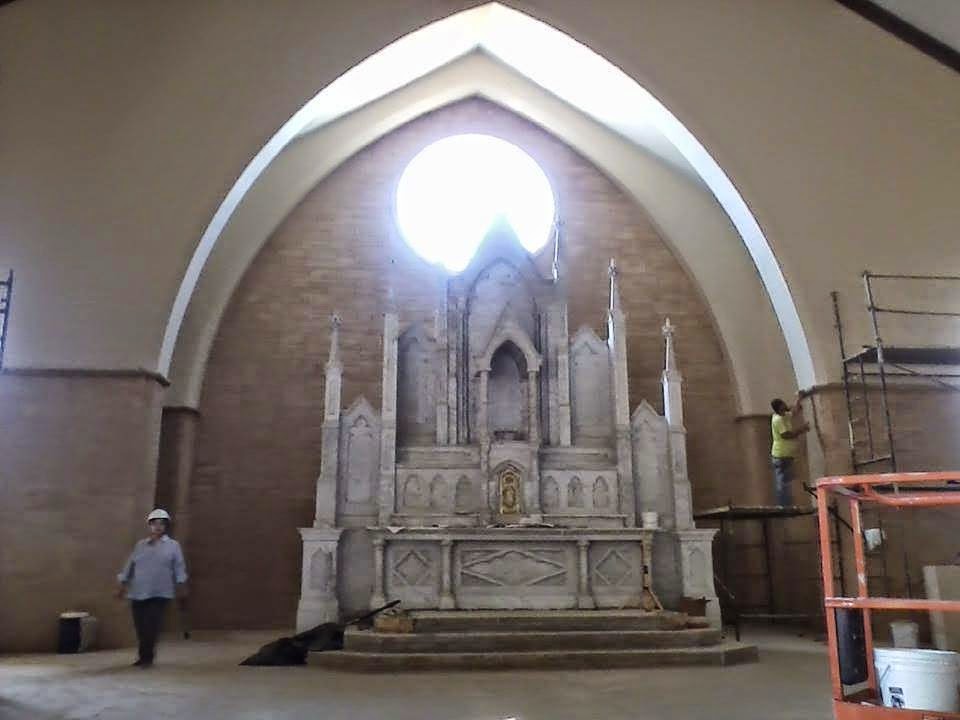 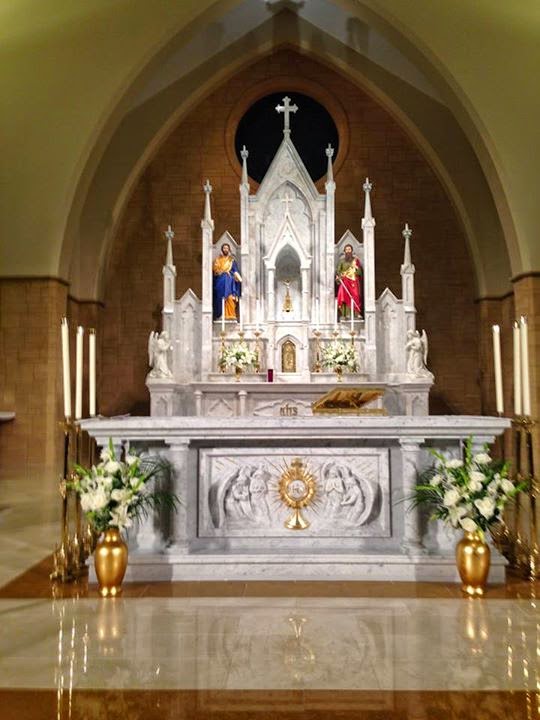 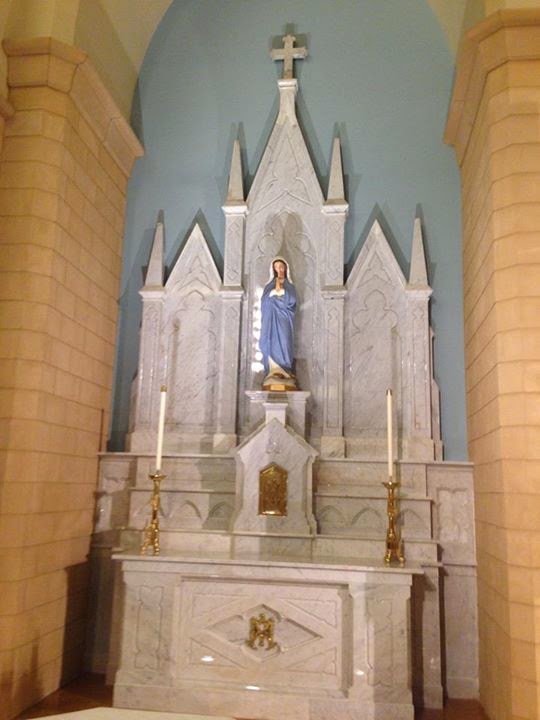 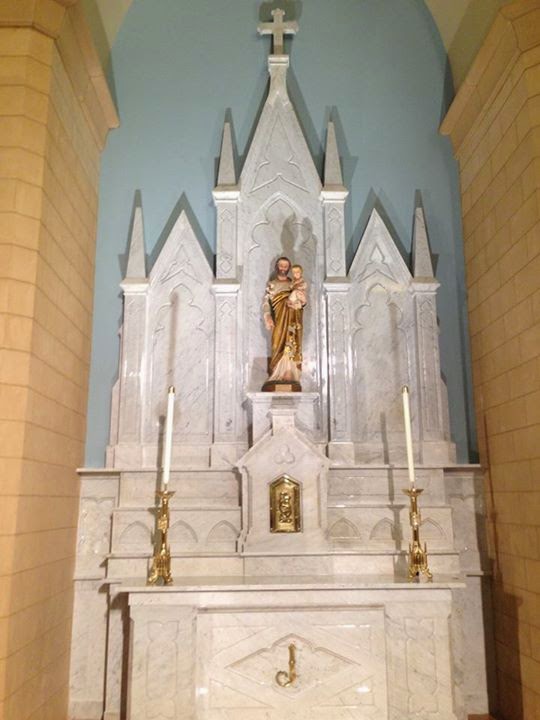 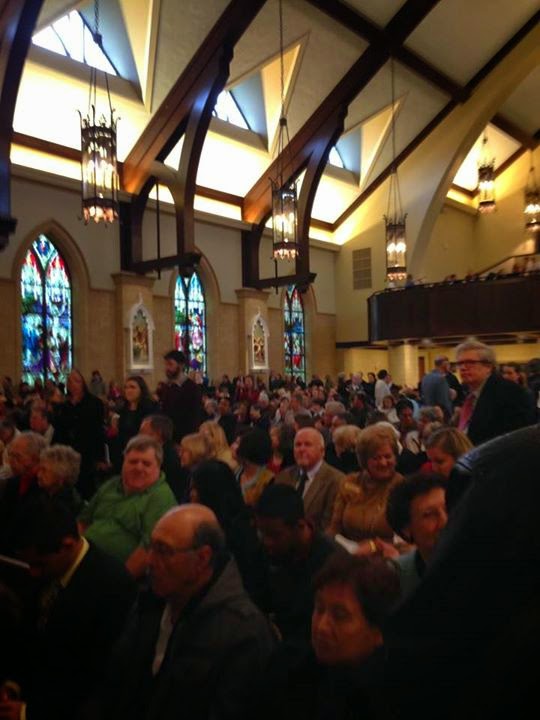 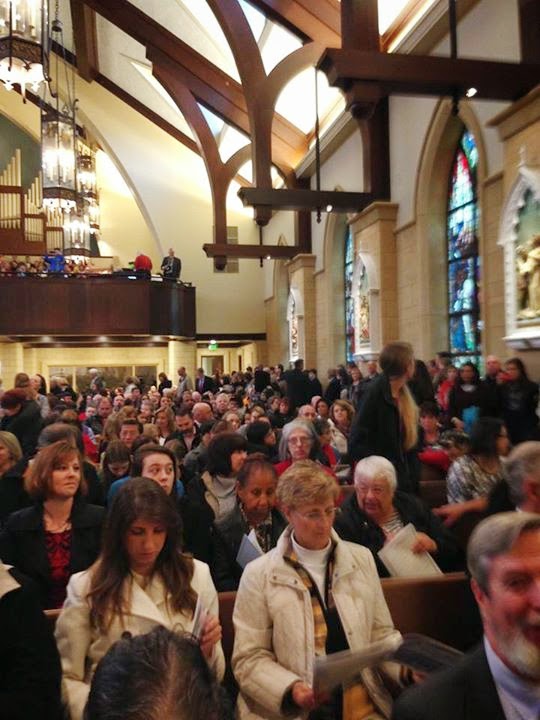 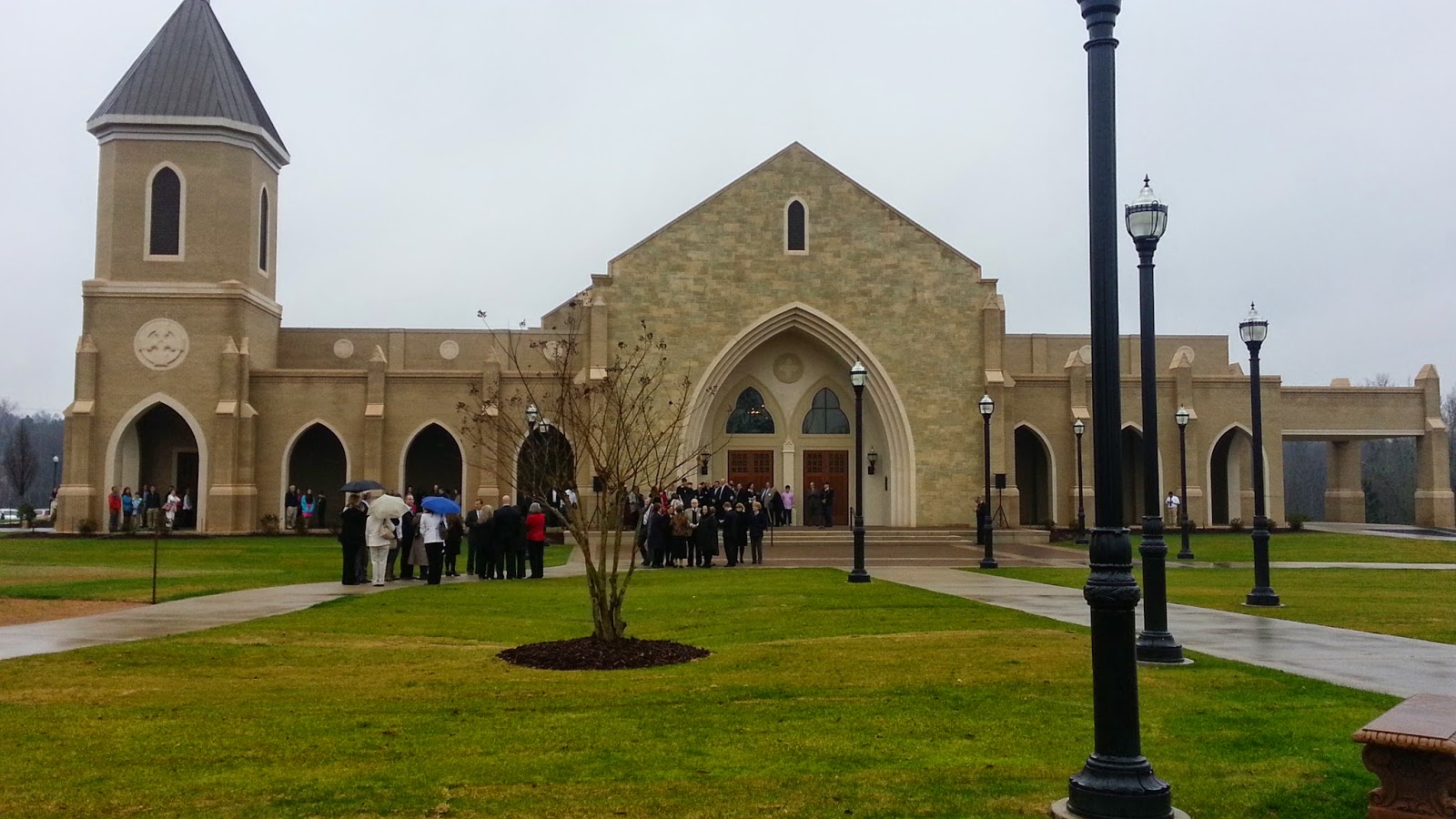 On Saturday, I attended the dedication of a 1400 seat traditionally styled, cruciform, church in a suburb of Augusta, Georgia, Grovetown.  When I was growing up it consisted mostly of rural areas and a bunch of trailer parks. But no more! It is the fastest growing area in Georgia if not the USA. The US Army at Fort Gordon has a huge homeland security facility in conjunction with the Signal Corps and its division that fights cyber-warfare is moving to Augusta from Maryland in about two years. This is simply huge for Augusta. So Augusta will be on the front lines of cyber warfare and may well have helped discover that N. Korea is responsible for the Sony attack!

As a booming parish, St. Teresa's has a huge Hispanic ministry (mostly Mexicans) and a large Vietnamese Community in addition to the majority Anglo community. So the Liturgy of Dedication tried to reflect this diversity.

The hymns and anthems were in the various languages. The parts of the Mass, Gloria, Sanctus, and the Mystery of Faith were in English. The Agnus Dei was in Latin. Thus the Agnus Dei was powerfully sung by all of us, no matter our native tongue! That highlighted for me the genius behind Latin in a multi-language parish!!!!!

And thus I opine. The problem with a parish with multiple choirs and choir directors is that there is rivalry even if there aren't different language groups. Why in the name of God and all that is holy does there need to be slots for the various choirs to sing at any Mass?  Why can't the the boss, the music director say, we are all coming together and we're singing in unity and this is the way it will be.

My recommendation and I wish it were the case for the entire diocese now is that at any multi-language Mass at the Cathedral or elsewhere, is that the Jubilatio Deo parts of the Mass be known by every Catholic, no matter their language, in the Diocese. And at these events, the Kyrie, Gloria, Credo, Sanctus, Mystery of Faith, Pater Noster and Agnus Dei would be chanted in Latin by everyone!

The Propers in Latin would be chanted by a schola or choir.

This would thus leave room enough for the differing languages to have hymns in their respective language at the procession (prior to the Introit), at the offertory and at communion. And of course there could be prelude to the Mass with this, that or the other choir singing their favorite ethnic hymn.

So, they have this wonderful traditional looking Church….are you saying they are going to screw it up with experimental worship?

If the Holy Ghost guided the council fathers at VCII, then yes, Latin should be our default language in situations such as these. To put it the other way: if you are wrong, then we have to question the role of the Holy Ghost in the promulgation of the VCII constitutions.

The solution in such a situation seems pretty clear to me: Latin in the Mass ordinary, and vernaculars in the Mass propers. Done and done. That means the vernacular would be used in the Introit, Collect, lessons, psalm, Alleluia/Gospel, prayer of the faithful, Offertory antiphon, Prayer over the oblation, Communion antiphon, and prayer after Communion.

In England we do not have multi-lingual Masses. There might be a Polish Mass, or a Spanish Mass, but the only mixture of language in a particular Mass would be vernacular/Latin.

The vast majority of parish Masses are entirely in English, with fairly dreadful music and liturgical abuses (such as those seen in the US and Canada). But this will change, albeit gradually.

Most people on this blog probably assume that I am an unreconstructed pre-V2 Latinist who eschews the vernacular. This is not true. This morning I attended Mass locally which was entirely in English but with no abuses (the new priest has tactfully removed them). It was for me as reverent a Mass as anything I have attended in the EF.

On Christmas Day I have to sing at the Dawn Mass (Lux Fulgebit) at 8 o'clock and then the Day Mass(Puer Natus) at 12 noon at two churches 30 miles apart. It's EF, and so will involve all the GR Propers. Despite the early start I'm happy to do it since I'm one of the relatively few people who are competent to do so. But I'm also keen on introducing vernacular chant into parishes which have up to now used only a 4-hymn sandwich or Haugen/Haas/Schutte/Inwood crap.

I may be a liturgical conservative (how could anyone be otherwise?) but I suspect I am more liberal and tolerant than the Pater Ignotuses of this world. (By the way, that is the correct plural; those who pluralize Latin indiscriminately make fools of themselves. Patres Ignoti assumes there to be more than one of them. The plural of stadium is stadiums; a stadia is a rod used by surveyors.) Don't get me started.

Our challenge over here is that around 20% of US Catholics are Hispanic, most of whom prefer Mass in Spanish.

JBS: “If the Holy Ghost guided the council fathers at VCII, then yes, Latin should be our default language in situations such as these.”

It is certainly true that both the pre-Vatican II liturgical movement and the bishops at Vatican II intended a glorious flowering and renewal of authentic Latin liturgy and other areas of Catholic life. The story of the past fifty years is the almost total blocking and sidetracking of any faithful implementation of Vatican II by the same forces that still are largely in control of the Vatican and most diocesan chanceries. In the Protestant Reformation similar anti-Catholic forces left the Church. After Vatican II, they stayed inside the Church to fight the Faith from within.

I wouldn't object to a Mass in Spanish although I wonder what became of the US policy which required immigrants to learn English.

I don't see the point of mixing vernaculars in the same Mass. If in doubt, use Latin. I have yet to see a Spanish-English missal, but Latin-vernacular missals are common.

If I remember this story, there was a debate as to whether to offer Pope JPII's funeral in Italian or Polish, Cardinal Ratzinger chose Latin....In multi-lingual situations, Latin should be used, I'm thinking mandated.

John - According to the US Code I found: "(a) No person except as otherwise provided in this subchapter shall hereafter be naturalized as a citizen of the United States upon his own application who cannot demonstrate—
(1) an understanding of the English language, including an ability to read, write, and speak words in ordinary usage in the English language..."

This is determined by a "reasonable test of literacy."

This is required, I think, only for those who are seeking to become naturalized citizens. In my experience, the great majority of Spanish speakers are not, for a variety of reasons, applying for citizenship, so the law does not obtain.

Even if a naturalized citizen has demonstrated the required knowledge of English, he/she is probably going to continue to speak his/her native language at home and among friends. And, at present, many people travel frequently to their home countries and communicate with folks there, so there is little demand that they adopt English as their commonly used tongue.

By the way, a priest-friend of mine has just begun offering all his Masses ad orientem. I respectfully request that all those sympathetic with this blog please keep him, and those who will inevitably oppose him, in your prayers.

John, Nobody enforces policies or laws in America anymore. I get sick of Spanish and make fun of it every chance I get.

JBS, What!!!!??? What do you mean a Priest is saying all Masses ad orientum! that is unacceptable…a Priest with testicles and a spine…absurd. Something is terribly amiss. Call Obama, call the Bishop, call the Pope….wait, never mind, they're all the same person. O My God! Reverence, devotion, a focus on God…what can we do…I know, call Uber Ignotus to baffle him to death with BS. That should do the trick and have the scrawny miscreant turn his a** around like it is supposed to be.

We know you are not a robot but the North Korean web crawlers have to be filtered out somehow.

From Redemptionis Sacramentum (norms concerning how Mass is to be celebrated)

Will definitely do Fr JBS, a priest friend of mine, also started doing Masses Ad Orientem as well.

Gene - As his mother, it is clear why Pater's posterior is a concern of mine.

But that you should express such an interest, along with a detailed description of his buttocks, seems to reveal why you want to see priests' posteriors - and during Mass, no less!

As your comrade George Takei might say, "Oh, My!"

Let me recommend the sermon linked by JBS at 9:15 am as an exemplary model of pastoral leadership, illustrating how a true pastor leads rather than follows his flock.

There was of course no precedent for a vernacular liturgy. Sometime during the 4th century the liturgical language in the west moved from a hieratic Greek to a hieratic Latin. No-one assumes that all the inhabitants of the western Roman Empire spoke even vulgar Latin.

However, once Latin was established as the liturgical language of western Church, its liturgy and music could develop in the way it did. Without Gregorian Chant there would not have been any western music which went beyond the simple aural and folk tradition. Even without notation by the end of the eighth century it had achieved an astonishing level of sophistication. This led to a system of notation (11th century) which made everything (including polyphony) possible. It led to Palestrina/Victoria/Haydn/Mozart (cheers!) but also to Haugen/Haas/Schutte/Inwood (boos!).

PI's mother, You do not have very good reading comprehension. There is no mention of PI's a** in my post. I was referring hyperbolically to any given Priest baffled by PI's BS. Besides, anyone who wants to view PI's a** only has to look straight ahead..it is perched conspicuously upon his shoulders...

Gene, may I suggest your listening to the sermon

The Joy of Tradition - Reclaiming Our Liturgical Heritage
https://soundcloud.com/sts-peter-paul-chatt/the-joy-of-tradition-claiming-our-liturgical-heritage

that JBS linked, as an antidote to unhealthy thoughts engendered by various priests and bishops from Rome to Macon.

BTH, Fr. Carter is a young priest (ordained less than a decade) just installed last month as rector of the historic Basilica of Sts. Peter and Paul in Chattanooga, where he was preceded by a very liberal monsignor who'd been there forever. Announcing Gregorian chant, Latin, and ad orientem in his first month or so as pastor, none of the time-honored "no changes in my first year as pastor" formula for promising that nothing will be done thereafter either.

"I know, call Uber Ignotus to baffle him to death with BS. That should do the trick and have the scrawny miscreant turn his a** around like it is supposed to be."

Yes, the nearest referent to "his" is my dear son, Ignotus."

You are obsessing on a priest's a**, and that can't be good.

PI's mother, Like your son, you have a studied inability to understand contexts. And, I believe it is you who continues to obsess about your son's a**. Incest is still a sin, n' est ce pas?

Gene - My, you do go on about priests' posteriors.

You are the one who brought it up, naming my dear son Pater (who had nothing to do with the post) in your comment.

Seems your obsessions are legion!

Excellent Sermon Fr JBS, thanks for sharing that.