A BOY AND HIS DOG HE BAPTIZED WHO SURELY AND INFALLIBLY IS IN HEAVEN--THE DOG THAT IS!

And I still have that Santa Claus with a Coke bottle in his hand! And of course, as Pope Francis reminds us, I still have my dog, but now he is in heaven! 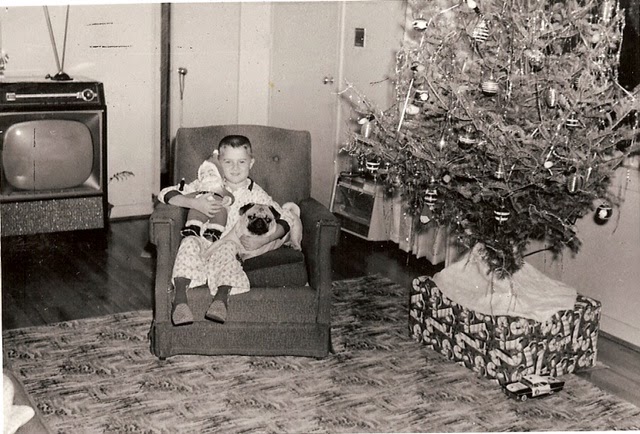 However, in this case, I believe Pope Francis is infallible. After Sister Angela taught us in the second grade that baptism was necessary for salvation and that in an emergency anyone, yes anyone, could baptize someone else, I took that to heart.

So I promptly went home and knowing that I could not get any priest to baptize my pet dog, G.G. a Chinese pug, I did it myself! Yes, I did what Sister Angela told us to do, I got some water, went outside and baptized G.G. with that water and I used the right formula! G.G., I baptize you in the name of the Father and of the Son and of the Holy Spirit.

G.G. died (actually my father euthanized him, but that's another story) at 17 when I was 22! That dog went to heaven because of me! And maybe when I was 7 years old and decided to baptize my dog so that he would go to heaven, my vocation to the priesthood was just beginning! Is it a coincidence that in the same year my dog died and I was 22 that I entered the seminary? I report; you decide!

UPDATE! UPDATE! UPDATE! It appears that the Pope Francis quote about pets is an urban legend and one the mass hysteria media is fomenting not to mention certain blogs. Now the story is being debunked HERE and HERE! Tell me it ain't so!

Why would animals, a part of God's good creation, not be a part of the New Creation?

I can't find my notes now, but one of my RCIA classes on heaven I quote various saints who were given visions of heaven who state that there are trees and food and diamonds in heaven and more delicious and beautiful than anything we have here on earth. One said the diamond the Blessed Mother gave her made the diamonds on earth look like charcoal.

Certainly animals are in heaven and heaven fully realized at the Second Coming is the redemption of all creation.

My only problem is with all those giant water bugs (southern roaches) that I crushed under by shoes and they popped with a loud noise when I did it, will they be there too??????????????? And what about the rats I've killed in the rectory?????????

Yep, the bugs and rats, too. Nothing in God's Creation is without purpose, and all will be redeemed by Him and, finally, understood by us.

Animals do not have human souls, but animal souls and do not share in the fact that we were made in the image and likeness of God and they were not.

We need more good teaching a la Thomas Aquinas, which apparently this pope missed in seminary.

We cannot think of heaven in material terms at all. We have no idea what it is like except sharing in the Eternal Bliss of God.

Supertradmom, Of course animals do not have human souls…they are ANIMALS. This does not mean, however, that they are excluded from the New Creation, or Heaven. The Bible is full of talk about animals, not the least of which verses is, "…the lion shall lay down with the lamb...and the suckling child shall place his hand over the adder's hole and not be harmed." There is nothing prideful about conjecture…as long as it is recognized as just that, conjecture. What is prideful is to assume categorically that God would exclude his creatures from redemption from the fallen world…or to assume that animals are less worthy of redemption than certain humans.

I wrote on this on my blog as well. I am sick of this confusion as to humans being equal to animals, which we are not.

Bad, bad teaching and laziness on the part of the laity...who need to learn their Faith.

Supertradmom, There is no confusion between humans and animals or teaching that animals are equal to humans. God chose to become incarnate as a human, confirming us once and for all as "in His image and likeness." The question as to the place of animals in the Creation and in the Kingdom has long been a subject of theological discussion, from Augustine and Aquinas to Luther, Calvin, Schweitzer, and Karl Barth. There is ample mention of animals in Scripture and in doctrinal treatments through the ages. Anyway, if there is to be a New Creation, it makes theo-logical sense that there be animals in it.

Perhaps they ought not do so, in this age of instant communication with the likelihood of misinterpretation by friend and foe alike.

Even in 1919 (or thereabouts) Fr. Adrian Fortescue wrote that nothing said or written by a pope should be released without first being vetted by two separate dicasteries.

Frankly at this point I'm just grateful to know that this pope actually believes in heaven.

Anonymous, don't be too sure...

What he actually said:
"Other texts, however, admit that animals too have a breath or vital spirit received from God. In this regard, man, coming from God's hands, appears in solidarity with all living beings" .(He was speaking of Psalm 104, which focuses upon the shared dignity of all living creatures).

Also, about those news reports last year said that Pope Francis was sneaking out of the Vatican at night to feed the homeless around Rome The pope personally debunked that rumor in an interview last March, saying the idea “has never crossed my mind” .

In all seriousness, I wish to state plainly and firmly that spiders are certainly the work of the devil, perhaps being some hybrid between a demon and a cricket. There can be no spiders--nor crabs, which are clearly some kind of spider--in Heaven.

In the alternate heaven of this discussion, I suspect dogs are made to clean the litter boxes of the cats. At any rate, it looks like we'll finally know the truth about unicorns, if we make it Up There.

Fr JBS, I agree with you, spiders are indeed the work of the devil...

Cats however being the best of all animal creation are definitely a work of God :D

Supermum, you sound as if you are a creationist. Most recognize that we humans are also animals...just a bit farther along the evolutionary chain...

There are lots of creatures between some bit of mold or single cell critter that got washed up or crawled up on the shore and you..

(Some may think that there's NOT a lot of difference between those critters and me...)

I like the humanness of Pope Francis. Having a Pope with a sense of humor is nice. I don't think one has to be stiff and aloof to be a good leader. I wonder if Jesus laughed much....I just got a Christmas gift book from one of our daughters. It's called "Zealot" "The Life and Times of Jesus of Nazareth". Maybe I'll get a clue.

I was having so much fun with this meme [link below], then suddenly the Pope was all over it!:

Father, thank you very much for that boyhood story. I love it! Is that you in the picture? Wow, what a neat house! I bet there was a mother in that house.

Do I believe dogs go to heaven? I don't know. But I'm a traditionalist enjoying all the funny debates about it, so what if my Rosaries are in a bunch?

Yes it is me and yes there was a mother there, an Italian mother who yes, was meticulous. We had been in the USA for about four years at this photo's take.

Three of the most dangerous words in the English language today. By design?

Last October 4th I took my dog and cat to be blessed by the good Fathers honoring the feast of St. Francis of Assisi. After a wonderful prayer, Father sprinkled my pets with holy water, at which time I said to my cat, whom I was holding, "Now you're Catholic!!" Well, you should have seen the faces of the bystanders, let alone the priest!! Pretty funny.

I wonder if Father was troubled, thinking I thought it was a baptism.

A couple of observations about animals, humans and heaven:

Did you hear about the dyslectic, agnostic suffering from insomnia? He stayed up all night wondering if there was a Dog.

Last, a common characteristic in serial killers and heinous criminals is animal torture as young children.

Gene has some great points on biblical reference to animals. Let’s not forget what transported the Blessed Virgin on the way to Bethlehem and Christ into Jerusalem on Palm Sunday.

I think it would be a good idea to include in a sermon addressed to children that they need to recognize the abuse of the family pets or animals in general as serious sin and that it presents harm to their souls as they develop into adults. God gave us dominion over the animals but that does not allow us the right to abuse them. Fortunately secular society seems to grasp the disgusting and cowardly behavior that animal cruelty is.

What I think is harmless, is for people who have lost furry family members to retain the hope of being reunited with them in Paradise. It’s a comforting thought that causes harm to no one.

I messed up Dog should have been written as doG.

Reasons dogs are better than wives:
1. You never have to wait on a dog. They are always ready to go.

2. Dogs think you are fun when you are drunk.

3. Dogs like it when you leave a lot of stuff lying around on the floor.

4. Dogs think it is great when your buddies come over to play until 2 AM.

5. When dogs snap and growl, there is usually a good reason.

6. Dogs do not play dead when you try to pet them.

7. If you come home smelling like another dog, dogs do not get upset...they are merely curious.

9. It is not against the law to keep your dog locked up in the basement.

10. Dogs never look at you like they hate you.

FR, if you got some kind of little terrier it would solve the rat problem in the Rectory.

Anonymous, I have a wife, two dogs, a cat, kids and grandkids. My wife is pretty cool, however. She can be quite funny...when asked once, "does your husband like formal dinners," she replied, "You are kidding, right?? My husband turns around three times before he lies down."

And...the word on the street is that you don't pee on the rug any more....you always go outside. Good boy.

I can't wait to see the dinosaurs...and the billions of chickens and cattle and pigs that we've slaughtered and eaten. And don't forget...the actual whale that swallowed Jonah.

Anonymous, what makes you think you'll get to see them?

'Lo, the poor Indian! whose untutored mind
Sees God in clouds, or hears him in the wind;
His soul, proud science never taught to stray
Far as the solar walk, or milky way;
Yet simple nature to his hope has given,
Behind the cloud-topped hill, a humbler heaven;
...
But thinks, admitted to that equal sky,
His faithful dog shall bear him company.

When I was 7 or 8 years old, I baptized my dog in the back yard. I did it just as I had seen it done in church: "I baptize you in the name of the Father and of the Son and of the Holy Spirit, and pray God's blessing on your life." I never told anyone I did it. I believe I'll see my sweet little dog in Heaven someday!