IT'S ADVENT AND SOON TO BE CHRISTMAS: HAVE YOU BEEN TO CONFESSION? 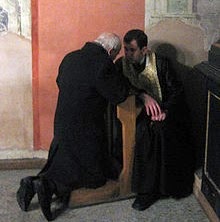 Pope Francis' Tuesday homily is a good homily for a penance service. I might use one or two examples he uses:


(Vatican Radio) God saves "a repentant heart," while he who does not trust in Him draws "condemnation" upon himself. This message was at the heart of Pope Francis’s homily during morning Mass at the Casa Santa Marta.
Listen to the report by Linda Bordoni:
Humility saves man in God’s eyes, while pride is a loser. The key lies in the heart. The heart of a humble person is open, it knows repentance, it accepts correction and trusts in God. The heart of the proud person is the exact opposite: it is arrogant, closed, knows no shame, it is impervious to God's voice. The reading from the Book of the prophet Zephaniah and from the Gospel of the day guide Pope Francis in a parallel reflection. Both texts, he notes, speak of a "judgment" upon which salvation and condemnation depend.

HUMILITY, THE ONLY PATH

The situation described by the prophet Zephaniah is that of a rebellious city in which, however, there is a group of people who repent of their sins: this group, the Pope said, is the "people of God" possesses the "three characteristics" of "humility, poverty, and trust in the Lord." But in the city there are also those, Francis says, who "do not accept correction, they do not trust in the Lord." They will be condemned:

"These people cannot receive Salvation. They are closed to Salvation. ‘I will leave within you
the meek and humble; they will trust in the name of the Lord’ throughout their lives. And that is still valid today, isn’t it? When we look at the holy people of God that is humble, that has its riches in its faith in the Lord, in its trust in the Lord - the humble, poor people that trust in the Lord: these are the ones who are saved and this is the way of the Church, isn’t it? This is the path I must follow, not the path in which I do not listen to His voice, do not accept correction and do not trust in the Lord. "

The scene of the Gospel tells of the contrast between two sons invited by their father to work in the vineyard. The first refuses, but then repents and goes to work in the vineyard; the second says yes to the father but actually deceives him. Jesus tells this story to the chief priests and the elders of the people stating clearly that it is they who have not wanted to listen to the voice of God through John and that is why the Kingdom of Heaven will be entered, not by them but by tax collectors and prostitutes who did believe John. And the scandal provoked by this statement, Pope Francis said, is identical to that of many Christians who feel "pure" just because they go to Mass and receive communion. But God, he says, needs much more:

"If your heart is not a repentant heart, if you do not listen to the Lord, if you don’t accept correction and you do not trust in Him, your heart is unrepentant. These hypocrites who were scandalized by what Jesus said about the tax collectors and the prostitutes, but then secretly approached them to vent their passion or to do business - but all in secrecy - were pure! The Lord does not want them. "

This judgment "gives us hope" - Pope Francis assured the faithful - provided, he concludes, that we have the courage to open our hearts to God without reserve, giving Him even the "list" of our sins. And in explanation of these words the Pope recalled the story of the Saint who thought he had given everything to the Lord, with extreme generosity:

"He listened to the Lord, he always followed His will, he gave to the Lord, and the Lord said to him: 'there is still one thing you have not given me’. And the poor man who was good said: 'But, Lord, what is it that I have not given you? I have given you my life, I work for the poor, I work for catechesis, I work here, I work there ... ‘ 'But there is something you have not  given me yet' .- 'What is it Lord? 'Your sins'. When we will be able to say to the Lord: 'Lord, these are my sins – they are not his or hers, they are mine… They are mine. Take them and I will be saved'- when we will be able to do this we will be that people, ‘that meek and humble people', that trusts in the Lord's name. May the Lord grant us this grace. "

I bypass the retailer and do my business directly with the manufacturer.

Well, the manufacturer has given us customer service representatives and would prefer you use them for your own good.

In fact we are commanded to do so: "Confess therefore your sins one to another: and pray one for another, that you may be saved" James 5:16
If we are confessing our sins, we might as well tell them to one authorized to forgive them: "Whose sins you shall forgive, they are forgiven them: and whose sins you shall retain, they are retained" John 20:23.

Anonymous, So, you are protestant, then?

That last paragraph really knocks it out of the park.