SHOULDN'T HIS RED HAT ROLL TOO? 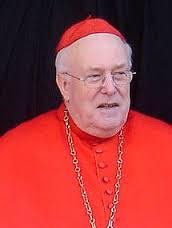 Content warning: This article includes explicit content; we felt it necessary to include this content to highlight the full extent of the betrayal of the children who were exposed to this material in Catholic schools during Cardinal Danneel’s period as Archbishop of Mechlen-Brussels.
Voice of the Family reported yesterday on the special appointments made by Pope Francis to the Ordinary Synod on the Family to be held in Rome this October. A significant number of the appointed prelates openly reject the teachings of the Catholic Church on questions relating to sexual ethics and the family.
The appointment most likely to cause scandal however must be that of Godfried Cardinal Danneels, Archbishop Emeritus of Mechlen-Brussels. Here are just some of the many questions that those concerned with the protection of children and the family will be asking in the light of Pope Francis’s invitation to Cardinal Danneels to attend a synod supposedly called to find solutions to the problems facing the family.
Did Cardinal Danneels protect clergy accused of child abuse?
Elizabeth Yore, an international child rights attorney who has provided legal and technical assistance to families of victims and the Belgian government in child abuse and child murder cases, provided Voice of the Family with the following report:
“On April 8, 2010, the newly retired Cardinal Danneels received some visitors at his home. They were the relatives of the Bishop of Bruges, Roger Vangheluwe, Danneels’ close friend. At this meeting, the nephew of Vangheluwe described a long and sordid 13 year molestation by his uncle, the Bishop of Bruges. Cardinal Daneels advised the nephew not to go public with the sexual abuse. During the meeting, Danneels advised the young man not to “make a lot of noise” about the abuse he endured from his uncle bishop because Vangheluwe was scheduled to retire in a year anyway. “It would be better that you wait,” advised Danneels, while also urging the young man to forgive his uncle.
“The conversation was tape recorded by the nephew and subsequently released to the press. Cardinal Danneels, the former head of Belgium’s Roman Catholic Church for 3 decades, could be heard on tape urging this sexual abuse victim to stay quiet and not disclose the abuse until after the bishop who repeatedly molested him over a span of 13 years could retire. After the release of the recording, Danneels did not dispute the authenticity of the conversation. A media firestorm was unleashed in Belgium, a country still reeling over institutional cover ups of child sex abuse.
“Bishop Vangheluwe admitted to the sexual abuse of his nephew and stepped down from his post shortly after the April 8 meeting between his nephew and Danneels. Because of the statute of limitations law, the Bishop of Bruges was never charged with the crime. However, the plot continues to thicken.
“The daily De Standaard newspaper reported that two former Belgian priests, Fathers Rik Deville and Norbert Bethune had personally informed Cardinal Danneels about Bishop Vangheluwe’s child sexual abuse several times between the mid-1990s and early 2000s. Father Deville told the Associated Press that he told Cardinal Danneels about a number of sexual-abuse cases. “The cardinal sometimes got angry and said it was not my job, that I should not get involved,” Deville said.
“The Belgian Police conducted a surprise raid on the Cardinal’s residence and office looking for documents relating to clergy abuse and questioned the Cardinal for 10 hours. Although the Cardinal was never charged, the Catholic Church’s own investigation commission issued a 200 page report on 10 September 2010.
“According to the report, the commission heard allegations from 488 complainants, concerning incidents that took place between 1950 and 1990. The report contained testimony from 124 people. Two-thirds of the complainants were men, now aged in their 50s and 60s. As head of the commission, Dr. Peter Adriaenssens, a prominent and respected psychiatrist, disclosed that Cardinal Godfried Danneels name surfaced in 50 cases, not as an abuser, but as someone who knew of the sexual child abuse by the clergy.”
Posted by Fr. Allan J. McDonald at Monday, July 30, 2018

There is no end to this nightmare!

And then, of course, there was Bernard Law...

This man is a delegate to the Synod?

Not only should Daneels be removed from the College of Cardinals but laicized.

And why would Francis specifically choose to rely on such an evil man so much that he would call him out of retirement to attend that synod among other things. AND who is on the balcony right by Francis when he came out onto it after the conclave....Daneels.

Why does the pope surround himself with men like McCarrick, Daneels, Forte, Coccopalmieri, Baldessari, Cupich, James Martin etc.?

What is it that they ALL have in common?

These cardinals and bishops, and more, all are promoting the normalization of active homosexual behaviour among the faithful. They are not calling people to renounce sinful behaviour that objectively would put their souls in jeopardy. They are telling people who are committing grave sins that God made them that way (which of course is heresy) and they are teaching that that which is evil is good and that which is good is evil......of them. Sounds like a gay cabal in the Vatican to me.

MT is on suicide watch, his golden calf is failing him.