Father Drew will become Saint Anne's Church in Richmond Hill, first ever parochial vicar. Given the fact that St. Anne only became a parish in the late 1980's after having been a mission since its founding in 1955, this is a huge development.

Up until about the late 1990's St. Anne's would have had about 100 households and met in a 1930's Congregational Church built by Henry Ford in the late 1930's and name by him after his mother and mother-in-law, the Martha and Mary Chapel, a name that was maintained for historical purposes once the Diocese of Savannah acquire it in 1955 for St. Anne's Mission.

This chapel seats about 150 people comfortably. Our new church seats almost 1,200 in anticipation of the wild growth that will occur in Richmond Hill over the next 10 years or so.  The great thing about having such a huge new church is that we only need two Sunday morning Masses, 8:30 AM and 11 AM (we have a 5:30 PM Vigil Mass on Saturday).  I don't foresee adding a Mass unless our Hispanic population booms which it might.

Currently there are three seminarians studying for our diocese who are converts of mine from St. Joseph Church in Macon. In addition, one of our transitional deacons was an altar boy for me at the Church of the Most Holy Trinity in the 1990's and another was a member there and baptized there in the 90's.

The older bishop is our Emeritus, Bishop J. Kevin Boland. 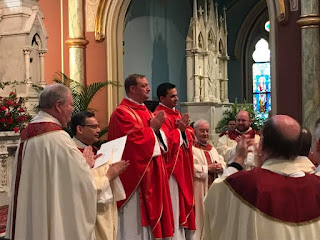 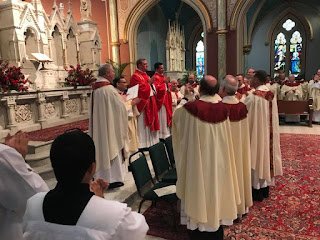 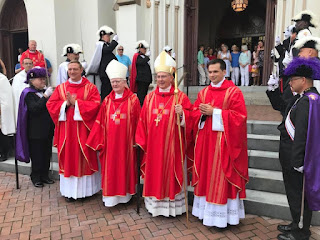 Glorious day for the Diocese of Savannah! Deo Gratias

I am curious---why the different colored vestments, some red and some more white/chrome-like? In Diocese of Lincoln (Nebraska) recently, at an ordination, the bishop and the priests ordained wore gold vestments.