WHAT A LOVELY LETTER! WHICH REMINDS ME THAT WE SHOULD NEVER UNDERESTIMATE WHAT THE HOLY SPIRIT CAN DO!

This photo is our foot washing from 2012 I think. We washed the feet of men being received into the Church at the Easter Vigil two days later. The one on the far left is Nate Swan who now is in his second year of seminary philosophy at Mt. St. Mary Seminary in Emmitsburg, MD and studying for our diocese! Did this do it for him????? 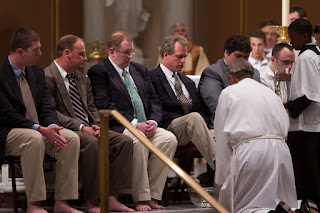 And who will be a priestly candidate this year? Perhaps the person kneeling by Fr. Vernon helping to wash the feet? I simply cannot get on the ground any more to do this, so I simply assisted. I thought of getting a shoe-shinning chair for each person to get in for me to do it more easily or to have them sit on the altar railing, but not, I thought better! Last night: 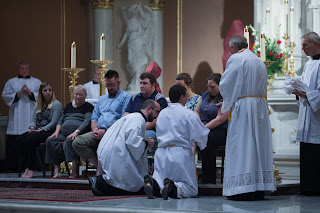 I continue to be amazed at any negative reaction to Pope Francis washing the feet of 12 people at Holy Thursday's Evening Mass of the Lord's Supper. These twelve were Catholics, Muslims, Hindus and Eastern Orthodox.

Pope Francis called them all children of the same God! Can they be children of any other god? Of course not. All of us, no matter our religion or lack thereof are children of God; no ifs, ands, ors about it.

God's grace can work wonders in people who feel as though God has touched them spiritually or physically. In the new evangelization, which Pope Francis is modeling for us, he reaches out to people and raises their dignity especially those whose dignity has been threatened or diminished by the "world", i.e devil.

With this in mind, here is the email I received early this morning, Good Friday:

Just a short note to wish you a Blessed Triduum!


15 years ago this weekend changed my life (and Ethan's) forever! I doubt you remember, but you washed my feet at the Mass of the Lords Supper - it remains the only time in 15 years as a Catholic for me & still moves me deeply when I think of it.


I understand the theology of the 'male only' foot washing, but I am personally glad this Pontiff has allowed women to be involved in this rite as an action of servanthood to all, especially as it was such a powerful & meaningful moment for me all those years ago as I was coming into the Church.


I am enroute to ND to spend Easter with Ethan at the Seminary - a special blessing to be able to celebrate this anniversary together as well as in the beauty of ND's Basilica; especially as he will be away at Novitiate next year.


Special Prayers for you this Easter Season, Lauren

About Pope Francis - I guess he who makes/changes the rules can break them. His idea of the "People of God" extends beyond Christians. Fr. Hunwicke has a great article on the Pedilavium: http://liturgicalnotes.blogspot.com/2016/03/pedilavium-or-foot-washing-such-wealth.html. It gives historical insight into this ritual. Check it out.

I am not schooled in theology. I'm just a lay person sitting in the pews, so I do not understand how the foot washing ceremony at the Holy Thursday Mass seems now to be about getting representatives of categories of people so as to show....what? I don't get it.

When I read Scripture, I see Jesus did not wash the feet of the multitudes. It is never mentioned He washed the feet of people who came to listen to Him. It is never mentioned it was part of His ministry to line up 12 people (a Greek, a Roman, a woman, a kid, an Ethiopian, a Pharisee, a slave, (you get the drift)) and wash their feet as an example. He washed the feet of his apostles, the 12. When I read the passage, after Peter balks at this act of humility of Jesus, Jesus says in effect, one who has bathed is already clean, and only needs to wash his feet to return to full cleanliness. This, to me, is an allusion to confession, and that because of their close relationship with Him, they are already clean (He has cleansed them). Then He tells them they must treat each other in the same way.

The symbolism is one of humble service to EACH OTHER, as apostles, as leaders of the Church, no?

The Last Supper was a private, intimate dinner with His apostles, and in it He gives them His last teachings about the Church.

So my question is, why are the Pope and clergy (this has been going on in churches I've attended for at least 20 years now), extending the idea of the foot washing to be a symbol of service to the whole world? Because I can see a distinction between what Jesus did for the Apostles and what He said to them about the meaning of the gesture, and His service to the crowds and individuals outside His chosen inner circle.

I guess I see the Pope's gesture as trying to accommodate and impress the world with a physical gesture of service, and using foot washing as a way to acknowledge that everyone is created by God and loved by Him. But Mother Theresa did it much better, and she didn't skew the liturgy to accommodate the mindset outside world.

I'm sure it's my lack of understanding, but to me this washing the feet of non-believers and those the Pope believes are persecuted reeks of an attempt to be hip to multiculturalism and modernism, and it something out of a progressive heterodox handbook. One thing's for sure: the "washees" are not "already clean" and only need their feet washed to be totally clean. Could someone explain this to me?