WHEREIN FATHER SOUTHERN ORDERS OPINES ABOUT THE ACTUAL CONTINUITY BETWEEN THE ORDINARIATE'S "DIVINE LITURGY, THE MISSAL" AND THE 1962 ROMAN MISSAL, AKA, EXTRAORDINARY FORM 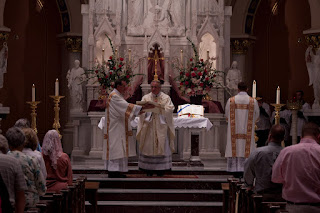 As you know, at St. Joseph Church, our 12:10 PM Sunday Mass is what I would call the "traditional" Mass in the sense of how it is celebrated. When in the Ordinary Form and completely in English, the Liturgy of the Eucharist is ad orientem and communicants kneel at the full length of the altar railing to receive, although communicants could also easily stand at the full length of the railing if they so chose to do so.

This is to have continuity between our OF Mass and the last Sunday of the month EF High Mass, although the EF is all in Latin.

However, if a dispensation were given by my bishop to use the Ordinariate's "Divine Worship, the Missal" for our OF Masses, there would be a great deal more continuity between it and the 1962 Roman Missal, although in English, although one could have a hybrid Latin/English Liturgy.

But let me point out the continuity of the Ordinariate's Missal with the 1962 Missal that our 2002 Roman Missal lacks:

1. The Prayers at the Foot of the altar could be recited as a legitimate option as the introit is chanted in the format of the EF Mass, which could then go directly to the chanting of the Kyrie and Gloria as the priest ascends the altar to incense it. The greeting is prior to the Collect and all can be done at the altar or chair (sedalia).  However, ad orientem is presumed by the missal, although facing the congregation is optional.

2. The Gradual could be chanted along with the Tract when prescribed in place of the Responsorial Psalm.

3. The first choice for the Offertory Prayers are the EF's version.

4. Only the Roman Canon is used on Sunday and has rubrics more similar to the EF's Roman Canon!

5. The embolism after the Our Father is more EF like and includes St. Joseph, Peter and Paul and Andrew in it!

6. The "Lord I am not worthy" can be recited three times.

7. The Last Gospel may be recited prior to the recessional.

8. The Elizabethan English, especially for the Roman Canon, gives a sense of the use of a sacral language as Latin does while remaining intelligible for the majority of English speaking Catholics. In other words, like the Latin, it is "other worldly" pointing to the kingdom of heaven which in the Mass transcends time to come to us!

Do you think any priest requesting a dispensation to use the Ordinariate's Divine Liturgy,the Missal, should be given a hearing by his bishop and then given the dispensation?
Posted by Fr. Allan J. McDonald at Thursday, March 03, 2016

You need to stop. You bent over backwards going on and on about the magnificent ordination of the bishop using the Ordinariate Use Mass.....which was a complete and utter wreck. It was embarrassingly bad. The Masses at the Shrine with that Msgr Rossi always asking for money are better.

It's silly to opine about some pseudo Crammer/Paul VI creation. The traditional rite of the Mass in the Roman Rite was good enough for centuries and nourished countless saints. The whole problem we are facing in the Church is because of some liberal clerics who hated the Catholic Faith and set out to destroy it. Look at the result. Complete and utter destruction of the Faith. We have an entire Church of people from the top, and yes I mean Francis, to what is left of people in the pews who believe, at most, buts and pieces of the Faith. We are living in a dark dark period that is going to get worse.

It is ridiculous for you to obcess about things that will never happen. The state of the liturgy is not getting better it's getting worse. We just had the Vatican's official paper call for women to preach at Mass. And you are going on about some pseudo Protestant creation. It's ridiculous. And the whole priest pedophile thing is starting again. It's become the norm to accept that priests are a bunch of degenerates and that Catholics don't believe anything the Catholic Church teaches. But you opine about last gospels and optional offertory prayers. IT'S NEVER GOING TO HAPPEN. DEAL WITH IT. It's all been purposefully destroyed. So just go ahead and rationalize a pope approving of contraception while wanting the APPEARANCE of a Catholic liturgy. It's all about appearance isn't it, forget about Truth.

Father, I think you'll just have to find a group of disgruntled Episcopalian converts and host them at your parish!

So we get a pope in over night who abolishes the OF Mass and institutes the EF Mass as the exclusive rite of the Church and then everyone will return to the practice of the faith and be well catechized and reject the secular culture that is currently the most important forming factor in their lives.

Dream on. I think we can get a sense of how many people actually desire the Latin Mass. Atlanta where Catholics are the second largest Christian group, has one FSSP parish and it is tiny by Atlanta standards and then then is an SXPX parish in Roswell, north of Atlanta and it is tiny.

If there were as many Catholics as you think there are that would want the EF Mass, the FSSP parish in complete union with the Archbishop of Atlanta would be a mega parish by now, and I mean a mega parish. But it is still small, probably less than 500 families and in metro Atlanta which has a huge Catholic population.

So your recipe is to reduce the number of practicing Catholics from any where from 20 to 30 percent to maybe 1 %. Smart, very smart.

Also, technically in pre-Vatican II times women did preach at Mass. If you know the technical rubrics for the EF Mass sermon, the priest should remove not only his maniple but also his chasuble to preach the sermon. In addition to this, where is the pulpit located? In the nave of the church not its sanctuary. So the priest steps outside of Mass or suspends the celebration of the Holy Sacrifice to preach the sermon to the people, because while based upon Church teaching, it is technically his own concoction and not a part of the formal liturgy. With this theology of the sermon it would be perfectly acceptable in an EF Mass where the pulpit is outside the sanctuary to have a layman or laywoman preach. It isn't part of the Mass.

For the OF Mass and to this day, a woman could give a reflection or discourse after the prayer after Holy Communion. It is done frequently and it's been done here when we have missionaries in our diocese asking for money. Some of us get religious brothers, some priests and some religious sisters or lay men or women. When not a priest, they speak after Holy Communion and our homily after the Gospel is brief.

So what is it that you are complaining about?

James that is already possible although I think our bishop would need to be informed and give permission. In fact he did so prior to the new Ordinariate MIssal coming out for St. Mary on the Hill in Augusta to do so. They have a former Episcopal bishop who is now a priest as their parochial vicar and there is a community of disgruntled Episcopalians that have become Catholic and he celebrates this Mass for them.

But I'm thinking more of just using it to make our 12:10 English Mass more in continuity with our 12:10 PM EF Mass. While there might be some former Anglicans that would appreciate it, I would not use the Anglican Options in the Missal, especially for the Introductory Rite and prior to the Agnus Dei but rather the EF options.

I think my proposal which is very sound is more controversial and more likely not to be approved by by bishop, but who knows until I ask.

Also, because the Ordinariate Missal's greeting with the people's response being "And with thy spirit" would be confusing, I would revert to the Latin for this part as well as at the Preface Dialogue.

Their English version of the Gloria, Credo and Sanctus, as well as Lamb of God is quite different than our is too, so these would need to be chanted in Latin--thus we would have the 1965 Missal by using the Ordinariate's but substituting Latin where the English diverges for the congregation too much.

I have often wondered if St Francis de Sales (FSSP) was in a more central, higher profile location in Atlanta it would draw more of the faithful. Unfortunately it is in a very remote location west of Atlanta, tucked away in a quiet neighborhood. Last Friday evening it was a one hour trip (traffic!) to drive the 25 miles out to SFdS to attend stations of the cross, but of course it was worth the trip!
When the FSSP priests first came here in the mid 90's the Mass was on Sunday afternoons at Sacred Heart in downtown Atlanta. I can recall the church being packed, even people standing in the stairwells. I guess it has become a case of "out of sight, out of mind". I would venture to say that 90%+ of the archdiocesan population is not even aware of it's existence. I have never seen any reference to it in the Archdiocesan newspaper.

However, if one is late to the 11:30 Sunday Missa Cantata it is difficult to find a seat. They are at capacity for sure.

With all that being said, I don't think the reality of this situation is going to change anytime soon, certainly not in my lifetime. The only way forward for now, in my opinion, is to continue to bring the OF into more continuity with the EF as Father has said.

Father, Most definitely you are not going to get large numbers attending the traditional Mass because, by and large, the vast majority of Catholics no longer believe in the real presence. The vast majority attend the OF of the Mass as a social outing for a singalong and then to socialize with friends afterwards.

It would be interesting to see how many attending the OF Mass would be prepared to attend if the Mass was ad orientem with parts in Latin or if it was the Anglican Ordinariate. I would say very few would attend, maybe once to see what it was like and when they found no guitars that would be the end of that.

I think the situation has to be faced that the OF is in fact dying out because there are very few left to carry on, as can be seen by the aging population in the pews. The Church has all but died out in Europe and it will happen in the US as well.

The small numbers attending the EF Mass at the moment will ensure that the EF will continue and will build in the years to come. That is the difference. The only growth in the Church - small as it may be - is coming from the traditional side of the Church. When people do decide they want to be Catholic and want to practice, by and large, the only Masses and priests available will be the traditional Mass and priests.