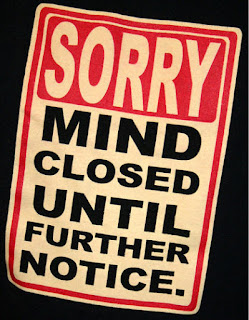 At a more progressive liturgical blog, there is this ditty by its main moderator. It is breathtaking in terms of pastoral insensitivity as well as narrow mindedness in terms of the new direction liturgical reform has taken since Pope St. John Paul in continuity with Pope Paul VI allowed for the older form of the Mass to be celebrated for pastoral need. Pope Benedict, of course, kicked that into high gear in allowing any priest capable of celebrating in Latin the option of the 1962 Missal.

The new liturgical moment begun by having now two forms of the one Latin Rite is new and disconcerting to this Benedictine. While he is entitled to his arrogant appraisal of things, he is not entitled to set the agenda about liturgical reform based upon a tired old apologetic foisted on the Church by progressive liturgists of the last century and the current one and in the most pre-Vatican II authoritarian way possible.

This is how pastorally insensitive he is and just plain wrong, dead wrong (my comments in red):

(This is a comment on a more traditional comment by one of his readers at odds with his perspective:)

Where you and I agree is that the reforms have not (yet) been 100% successful. The task was so huge, the need so great, the cultural shift called for so monumental, that the implementation of the reforms could not but be checkered. There have been plenty of mistakes and misunderstandings and bad taste and all the rest. (Now here he makes sense and should in a full length article explain what these mistakes are that are still being made in perhaps the majority of parishes in the world!)

But there is a reason why Mother Church called for it. And as Jonathan points out, it is a reform process going on since at least Pius X (recall the massive redistribution of Office psalms he ordered in 1911 – a rupture if there ever was one). The vision put forth at Vatican II is correct. It is the Catholic understanding of liturgy now. (Vatican II Fundamentalists like to freeze it and its direction in time and for ever. One can't do this in a living, breathing Church with the Holy Spirit pulling surprises all the time, in this case through the writings of Pope Benedict since the 1960's and his authority as pope!)

The most important task of the church, going forward, is for everyone to come together, affirm the reforms of Vatican II (and of the previous 50 or so years), and work together to implement them as well as possible. (No, the most important task is for both traditionalists and progressives to come together to affirm that there exists now two forms of the one Roman Rite and to agree with Pope Francis in authorizing the Ordinariate's new Roman Missal, "Divine Worship, the Missal" which incorporates not only Anglican patrimony consistent with the doctrines and dogmas of the Liturgy and its spirituality but allowing for many elements of the 1962 Missal as well!)

The decision to approve the 1962 liturgy is a disaster. It is divisive. It undercuts the V2 reforms. It sows confusion and misunderstanding everywhere. It has put the wind in the sails of those who want to fight V2 and hold to an understanding of liturgy different from the Church’s (yes, that vision has evolved and changed in the last 50-100 years, so we can speak of the 1962 vision of liturgy as not the Church’s vision, as no longer the Church’s vision). (The disaster is how Vatican II was implemented by progressive liturgists in the most pre-Vatican II authoritarian way. Who is anyone to say that the 1962 Roman Missal is no longer the Church's vision except a pope? No pope has said this to include Pope Francis who will, with the help of God, fully reintegrate the SSPX back into the full canonical status with  the Church. The divisiveness of progressive liturgists who tried to suppress the 1962 Missal after the 1970 one was issued created the divisions we have now, not what Pope Benedict did in being truly and authentically liberal in allowing both forms to coexist. If this had happened in the first place, we would be in a much different place today. There is no going backwards to 1970's authoritarianism about the reformed liturgy being superior to the one that preceded it. Today they are co-equal. To denigrate either form properly celebrated by saying the black and doing the red is divisive to say the least and not suitable for today's new liturgical renewal!)

All the problems in the world in the celebration of the liturgy of Paul VI do not give reason for abandoning the Church’s understanding of liturgy and retreating to an earlier era with it’s inadequate liturgy – no matter how appealing that now-obsolete liturgy may be emotionally. (This is once again elevating the horizontal, sociological aspect of the liturgy to an idol and making it more important than what the Mass is meant to do and every valid Mass does: Renew in an unbloody, palatable way the One Sacrifice of Christ on the Cross for our salvation. The Sacrifice and Banquet of Word and Altar are present in the Church's two forms of the one Latin Rite and this is the foundation that cannot be overwhelmed with silly ecclesiological items that make the Church a self-referential community closed in on itself by a liturgy that sees active participation and laity doing this that and the other as the basis on "good Liturgy!" Poppycock! It is Christ who is the center of the Liturgy and opens a vista to our salvation and gives us grace to strengthen our faith and good works in the world!)

My final comment: This Benedictine doesn't get it! Pope Benedict makes very very clear that it isn't either/or when it comes to the two forms of the one Latin Rite, but BOTH/AND! And that folks is what is truly Catholic and authoritative and disruptive of narrow minds!
Posted by Fr. Allan J. McDonald at Friday, March 25, 2016

I always have to laugh this particular Benedictine dismisses the EF as 'clericalised sacral drama'. He fails to understand that is exactly what people need and want. If we wanted a chat show, we could switch on Graham Norton or Richard and Judy.

I don't think there's a need for 2 Roman Rites. When Paul VI imposed his liturgical changes on the church, he did something which in my view no pope has the authority to do, and it's shocking that only 2 bishops stood up to him. But what he could have done is offered alternatives to certain segments of the Mass--for instance, when there's no choir then maybe we don't need 2 'Domine non sum dignus'. Or maybe a troped Kyrie could be an option. Or one Confiteor at the beginning of Mass rather than 1 by the priest and another by the servers. This would have provided more continuity between the historic Mass and the innovations. But alas, Paul had absolutely no pastoral experience and was out of his depth.

I agree with Fr McD that it's very troubling how some ardently Novus Ordo die-hards want to prevent people from using the old missal. Why are they so intent on controlling how other people approach the Divine?

You are very generous to use your time responding to fanatics. I wonder if the fanatic you are referring to is the one fired from ICEL because of his obstinate fanaticism. If so, he could be the one who also created a web site to get even, for revenge, which allowed him to spread his fanaticism and gain a following, as all fanatics try to do.

Let us forgive him and pray for him, he is a very silly boy. Say a mass for him, Father. In any evet, a holy, healthy, happy Easter and a blessed Birght week to you!