CARDINAL ROBERT SARAH! IS HE ALL WASHED UP IN CONTRADICTING POPE FRANCIS OR IS HE ACTING IN CONCERT WITH THE DESIRES OF POPE FRANCIS? EITHER WAY IS IT A SIGN OR SIGNS OF CONTRADICTION? 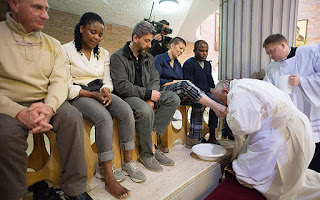 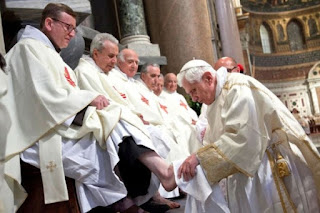 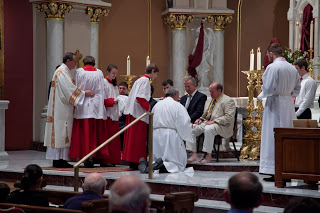 John Allen of the soon to be former Boston Globe Crux but soon to be Crux of the Knights of Columbus has written an article that describes Pope Francis as the pope of "both/and" in a world of "either/or." You can read Allen's article HERE.

Pope Francis, while decidedly progressive in most things Catholic, especially the Church's social teaching, does seem to be open to traditionalists such as the SSPX and bringing them back into a regular status in the Church. In fact he has given them faculties to licitly hear confessions during the year of mercy of any Catholic who chooses to go to their chapels for it.

We know that Pope Francis has offered many olive branches to progressives who have felt disenfranchised by the last two pontificates. Liturgially Pope Francis has confirmed what is common practice in many dioceses throughout the world on Holy Thursday, women may have their feet washed and the pope has changed the liturgical meaning of it or at least its theology. Of course, this ritual has always been optional.

Now, though, Cardinal  Robert Sarah seems to have indirectly chastised Pope Francis for allowing women's feet to be washed.

This is what His Eminence has written. If Cardinal Sarah is confronting the pope publicly, gulp, His Eminence may end up like Cardinal Burke. My prayer, my hope, is that Pope Francis gave his tacit approval for the good Cardinal to contradict His Holiness. Time will tell:

Priests are not obligated to wash the feet of women during the Mass of the Lord’s Supper on Holy Thursday, Cardinal Robert Sarah has confirmed.

The prefect of the Congregation for Divine Worship and Discipline of the Sacraments told reporters in Rome on February 26 that every bishop or priest “has to decide in accord with his own conscience, and according to the purpose for which the Lord instituted this feast.”

Will Cardinal Robert Sarah face the wrath of Pope Francis, similar to the person in Mexico who nearly pulled down Pope Francis on top of a disabled person?

Or did Cardinal Sarah act in concert with the pope, thus confirming John Allen's thesis that Pope Francis is the "both/and" pope in a world of "either/or?"

Much to the dismay of some, I will follow my late mentor, Bishop Raymond Lessard and wash the feet of six RCIA candidates, a mix of men and women. Six are chosen to make clear that this foot washing has nothing to do with Jesus' washing the feet of the first priests of the Church. Rather it is based on Pope Francis theology of using the Mass to teach everyone that everyone is to be of service to the needy. I can live with that or the other. I guess I am a both/and person in an either/or world. How about you?

So choosing SIX means the foot washing has nothing to do with the origin of the priesthood? Would 7 or 8 or 9 have the same effect?

Choosing SIX means you have chosen imperfection, that you are codifying liturgically the imperfect, the tainted, the unholy. Congratulations.

Perhaps Cardinal Sarah is not concerned with the repercussions coming from the Bishop of Rome, but rather with the reality being symbolized in the washing of the feet, not to mention not violating the freedom of conscience of each priest.

I don't care one way or another if the feet of women are washed on Holy Thursday. What I have a problem with is bishops and priests defying the law of the Church when they had no authority to do so. I include then Cardinal Bergoglio in that. I also am scandalized that when he was pope and had the authority to change the the liturgical law Pope Francis choose not to do so but to openly ignored the liturgical law.

Why do priests think they have authority over the liturgy? They don't. Priests are servants to the liturgy. We wouldn't be having these scandalous liturgical wars going on for decades if priests just followed the Missal of Paul VI. I can't go to my job, ignore the directives of my boss and expect to keep my job. It the height of arrogance for any priest or bishop to add remove or change anything in the liturgy based of personal preference. That goes for more liberal and more traditional priests. Stop. Stop allowing sub standard music at Mass. If someone can't carry a tune or is tone deaf then maybe, just maybe they shouldn't be standing up in the sanctuary leading song. If someone cannot pronounce the language of the Mass that is being offered then maybe they shouldn't be reading from the Lectionary until they learn how to read. It's not rocket science. Stop being stupid. Offer Mass with piety, reverence and obedience to the missal. Be kind to people and stop showing a false love by ignoring irreverence at Mass. It's to important. Some of us actually care about formally worshipping God as prescribed by the Church in 2016. Some of us are actually excited and can't wait to attend Mass. I don't care about Father's latest jokes or his latest vacation episodes. I want to hear about Jesus, Our Lady, the saints, the Catholic Faith. Stop with the stupid. To all the priests out there MASS IT ISN'T ABOUT YOU, WE ARE NOT COMING TO CHURCH TO SEE YOU. WE ARE COMING BECAUSE OF JESUS, OUR LADY, BECAUSE OF THE CATHOLIC FAITH.

If Pope Francis acts like a typical liberal, he will crush Cardinal Sarah. No one is more illiberal than a liberal. If he doesn't, that would be the best outcome.

I wasn't aware the Pope mandated exclusively coed footwashing, so I don't see the contradiction between the Pope and Cardinal Sarah.

I sympathize, I really do, and in fact I'm moving my family from our Novus Ordo parish to an Anglican Ordinariate parish precisely for the reasons you mention.

But all the abuses and mediocrities you mention are a direct result of the many, many loopholes written into Sacrosanctum Concilium that effectively allow priests and music ministers to take an a la carte approach to the Mass, in service of "active participation".

According to SC, "the use of the Latin language is to be preserved in the Latin rites", but if it gets in the way of active participation, the vernacular may be used. Similarly, Gregorian chant should be given "pride of place", but other forms of sacred music "are by no means excluded". The pipe organ "is to be held in high esteem", but "other instruments", etc.

SC has these "but" clauses riddled through it, first upholding the traditional liturgical practice of the Church, then allowing all manner of exceptions based on the subjective judgement of the priest or music minister.

It's all very well to argue (as many do) that people should take the traditional practices as normative. But SC itself undermines this argument, with its numerous invocations of "active participation" and its expressed intentions to foster "noble simplicity" and avoid "useless repetitions". The almost universal banality of Novus Ordo liturgy is just the logic of SC working its way out.

Worst of all, it means that there is no permanence. Fr MacDonald celebrates (by all accounts) a highly reverent Novus Ordo Mass in accordance with the traditional norms laid out in SC. But if he gets moved next year, the incoming priest may very well decide that such formality runs counter to "active participation" as he defines it, he can cite SC's "but" clauses to reintroduce all the banalities you mention, and more.

I don't understand as to how Robert Cardinal Sarah contradicted His Holiness Pope Francis in regard to the foot-washing novelty. Pope Francis' liturgical novelty in question is an option.

Even those bishops, such as Bishop Morlino, who declared immediate acceptance of the Pope's novelty, made it clear that the novelty was an option, not a mandatory practice. As we know, the Mandatum itself, even when it involves males only, is optional.

That said, as with just about every "optional" Novus Ordo practice, the inclusion of women in the foot-washing ritual will become the norm. In Western nations, priests will be pressured in the name of political correctness and the feminization of the Novus Ordo to wash the feet of women during Holy Thursday Mass.

It will be interesting to see whether the above will take root in non-Western societies where remains some semblance of modesty in regard to how men and women interact publicly with each other.

But in Western nations, where any sense of modesty disappeared long ago, the sight of a Catholic priest handling and kissing a woman's foot won't raise an eyebrow among the majority of Catholics and non-Catholics.

Fortunately, at my traditional parish (and at all trad parishes around the world), we will have 11 MEN and 1 teenage boy ( who represents St John) have their feet washed.

There is no contradiction between Pope Francis and Cardinal Sarah on foot washing.

To paraphrase Fr. McDonald: "Some with an ideological agenda believe that some contradiction exists between the Pope and the Prefect of the Congregation for Divine Worship."

Cardinal Sarah is a product (Some cruel liberals might even say "victim".) of the strongly homophobic culture which formed him.

My suspicious mind suggests to me that it is possible,,,even likely that an occasional priest might get a bit "excited" while washing the feet of some comely Catholic lass....

(Now it's time to tell me what an ignorant, evil person I am.)

Evil? probably not. A boob? yes

The Mandatum is not associated with sexual attraction. It is a ritual about humble service.

Gob might also explain why a 'homophobic' culture should induce someone to favour a men-only option. As I have pointed out previously, Cardinal Sarah's culture is French. Regarding homosexuality, the French refer to it as the 'English disease' but in practice have always had a less puritanical attitude to sex than the Anglo-Saxons.

The idea of bishops and priests washing and kissing the feet of women (which has an obvious sexual connotation whether you like it or not) would have been scandalous even during my lifetime; but then so would the idea of women in the sanctuary on any pretext.

As part of Mass it's a recent innovation, and to avoid controversy simply don't do it at all. This subject comes up every year, and it becomes ever more tedious.